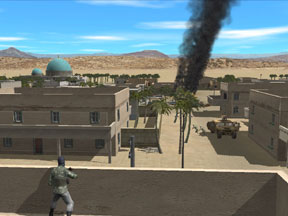 Many years ago I used to cover the annual Defense Military Simulation Conference in Orlando. It was a trade show where new simulations were marketed to the armed forces to use in training. It was an interesting show and featured a lot of very realistic simulations designed to give soldiers a taste of combat, and officers a taste of command, before they had to do it in real life. Presumably mistakes would be made in the training and not on the battlefield where real lives hung in the balance. As such, these simulations were as realistic as possible, and not really games in the way we normally think of them.

Combat Mission: Shock Force could have easily found a home there. I very much enjoyed playing the "game" but at the same time, it’s not going to be everyone’s cup of tea. If you are used to the twitchy shoot everything that moves gameplay of Quake or even Command and Conquer, you might want to look elsewhere as this is a game of a different stripe.

As a true simulation, the emphasis here is on the realistic characteristics of vehicles and weapons and on the enemy and friendly forces using them.

Graphically the game would be considered sub-par compared to almost any other wargame, but you have to realize that eye candy is not the focus. Tanks and vehicles and even men look real enough so that you can identify friend and foe, but don’t have that realistic touch found in most games today. However, underneath that passable graphical finish lies the actual characteristics and behaviors of an M1 Abrams tank or a Stryker Light Armored Vehicle including things like how quickly it can accelerate, how much of an angle it can safely climb and what happens when various rounds and shells of different caliber strike its armor.

Even compared to games like ArmA which is a bit of a mix between a game and a simulation, Combat Mission comes down heavily on the simulation side. I kind of felt like I was playing some top secret military simulation, like I had in my hands something that should not be distributed to the general public. It feels that real.

The plot of the game is a little odd. The United Nations (really the US) has decided to invade Syria. You don’t really get any historical context as to why you are there. It’s just a series of missions inside Syrian territory.

It did strike me a little odd that the scenario is the United States against Syria. I mean no offence against the Syrian armed forces, but taking frontline US equipment against Syria does not seem like it would be much of a challenge. In my very first briefing I was set right on this point. While the Syrian Army can’t conceivably win the overall war against the United States on a strategic level I was told, the Syrians are well trained and equipped with good weapons which means that they can inflict a lot of casualties on a tactical level. In other words, an inept US commander could make this operation a lot worse than it has to be. So don’t screw up!

One thing that I really did like about the game is that while you are in a 3D world which is how most real-time games work, you have the option of playing in turn-based mode. I actually think this is a lot more realistic than real-time if you think about it. While the world does indeed move in real-time, from a commander’s point of view, a battle is a series of orders that are carried out by the men and women being commanded. You give an order and then see if what you wanted to happen actually does. You can’t immediately give a new order sometimes because there will be a delay in getting the new order to the troops.

The game handles this by an orders phase followed by about a minute of real-time movement and firing where both sides engage one another and the commander (you) basically have to sit and watch before the next orders phase. This seems more realistic to me than the loop grabbing of units and commanding them every single second in real-time like with most wargames. A commander simply can’t act that fast in real life, and Combat Mission represents this.

One of the most fun things for me was commanding artillery. If you have been given artillery priority for your units you can request either a ground-based artillery barrage or an air strike. You simply call the artillery and highlight the area you want leveled. Like in real life, not every single shell is going to land right where you want, but US artillery is pretty accurate. Still, you don’t want to call in a strike a few meters from your own position. It was neat waiting for the guns to start firing and then watching the shells take out a building where some annoying fighters were keeping my infantry pinned down.

One negative aspect of the game is the lack of a real tutorial. The game is very complicated and going through some type of basic training where you learn how to give commands is a missing part that I think is essential for the game to be a commercial success. You can learn everything by reading the manual (just like in the real military) but it would be nice to have a "move this platoon to the waypoint and then fire at the targets" type of mission where you can learn everything as you go.

The sound effects are pretty good, with each weapon, friendly or enemy, sounding like they should. Engines for different vehicles also sound very good. There is not much else in terms of sound, though what it has is accurate.

I am going to give Combat Mission a perfect score in the value category because there never really has been a game (ArmA came close) for those who really want a hardcore military simulation. If you want to know what it’s like to command forces on a real battlefield in rapidly changing conditions, you can either join the army or play Combat Mission: Shock Force.

This game is certainly not for everyone, but for those who really like extreme strategy simulations, it does not get much more extreme than this. I have no doubt that the real life armed forces could use this game for training. Whether or not that sounds like fun is up to you. Combat Mission: Shock Force earns 3.5 GiN Gems for bringing an entirely new flavor of gaming to the table.