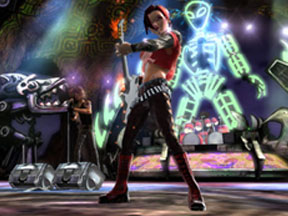 Want to be a rock star without all the fans, touring, sex, and money? Then Activision and Neversoft have a game for you! Of course, I’m referring to the ever-popular Guitar Hero III.

After buying the franchise in 2006, Activision has completely sent GH3 soaring past its predecessors in popularity. Activision’s ability to go overboard on marketing is only part of the reason why GH has such a large audience this time around; the other reason: Since its debut, GH has been an easy game to slide into and has proved challenging after the initial hook wears off.

So to make a long story short, GH was winning over a large number of gamers while it was with Harmonix and RedOctane, and now with a $115 million opening week, its presence is unavoidable.

Needless to say, a sort of Guitar Hero mania has claimed the hearts and minds of gamers, both new and old-or as our Chief Editor John Breeden put it: "GH3 is as popular as a free lobster buffet at the moment."-but with all this hype, is it really that good?

Yes, my friends. I tell you it is.

Upon first look, GH3 performs much like the games it sequels. Apply an "If it ain’t broke don’t fix it" line if you must, but when something works well at first chop, honing takes priority before any major changes occur.

Because of this attitude, you won’t hear me complaining about lack of "NEW!" this time around; however, this release should be considered the pinnacle of what we’ve seen from the GH franchise, and I do I expect changes to appear in the next installment. Until then, I’ll just keep sharpening my claws.

As for now, I’m happy to say that GH3 has an excellent track list. My personal favorites being Tenacious D’s "The Metal" and Santana’s "Black Magic Woman." And though I might not be so excited with the inclusion of Slipknot, I’ll say that GH3 definitely has all its bases covered in terms of variety. When it’s all said and done, there are over 70 tracks to be found on GH3, and over half of them are master recordings, which I feel is a major plus.

Aside from the music, the options menu allow little perks-like jumping into a practice session mid-song-that make the game seem very fluid and user friendly.

Another feature that is probably the most worthy of praise is the inclusion of Boss Battles during Career mode. In a Boss Battle, you replace the regular Star Power with attack points that earn you power ups. The inflictions range from broken strings, whammy bar attacks, and lefty/righty flips. The bosses include Tom Morello, Slash, and a final showdown with Lou the Devil, all of which are added to the playable character list after they are defeated.

Granted there are some complaints that more guitar stars weren’t included for this part of the game (Adam Smith, anyone?). On the PS3 and 360 versions of GH3 Bret Michaels appears as an in-game character, but he’s mysteriously absent on the Wii. Aside from that, I feel the number of celebrities included in the game was fine.

In easy and medium settings, the boss battles may seem to few and far between, but as you get into hard and expert modes, you may be happy that Buck Dharma and his ilk aren’t popping up with original gauntlets for you to stumble through.

In other sections of discussion, the animated segues between the changing venues are very cool, but also very short. They grabbed my attention mainly because they leech off the sleek style of Jamie Hewlett, much like the GH2 TV spot did in 2006. I wanted to see more of these little episodes, but their short length didn’t drop the overall quality of the game.

The handful of different venues to play are interesting in their own ways, the store goodies are attractive goals to work toward, and the different modes are especially sweet, with an emphasis going toward Wi-Fi mode where you can challenge other players online.

As it pertains to my gaming experience, the Wii version of the controller has been getting ample praise for its style and innovation. The fitting of the Wii-mote in the Les Paul-styled frame was a fantastic idea from the GH3 squad, as it uses the remote’s wireless capabilities, the rumble feature, and the internal speaker to the game’s advantage.

The only major problem the Wii version faces comes from the lack of downloadable content when compared to what’s available on the PS3 and 360 versions of the game. However, this disadvantage is not especially important for the time being and can be overlooked in the light of all the benefits.

The pros far outweigh the cons for this one, making it well worth the extra cash. For me, GH3 has been nothing but fun, and if the figures say anything, a large majority of gamers are with me in that opinion.