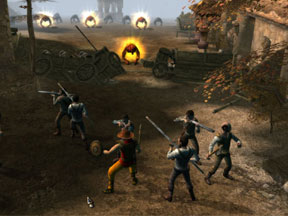 The Chosen: Well of Souls

The Chosen: Well of Souls is a budget title. At $20 there’s only so much one can expect from a game. A quick glance at the credit’s screen shows only a handful of people were involved in this game’s creation. Still, it does some things surprisingly well.

The Chosen centers on a "powerful sorcerer who became immortal after unraveling the mystery of the ancients. His pride and hunger for power made him eliminate all alchemists whose skills and knowledge equaled his. Now he keeps their souls in Golden Tanks and uses them for his evil purposes" and". you know what? The story is clichÃƒÂ©d and completely irrelevant. It basically exists to supply the game with goals, missions, quests, and places to go.

Moving onto the game itself"

The Chosen has a surprisingly detailed 3D environment that you are able to view at any angle. Visually the game looked very good at a setting maximum of 1920 x 1200 in 32-bit resolution. The additional options for high dynamic range imaging, transform and lighting, fog distances, and anisotropic filtering enhanced the overall graphical presentation. For a game using graphics from last decade it looks solid. Environments aside there were issues with the avatar models. The monsters look okay; humans, not so much. Likewise combat and movement animation for both was stiff at best.

Controls are an interesting mixed bag. Going into this game I had preconceived notions of how to control my avatar. Developer Rebelmind decided on an unconventional control schema that requires a minor learning curve. Unfortunately giving you freedom to look where you want also requires micro-manage your camera angles. This isn’t bad in idle moments but in the heat of battle constantly having to rotate the view, tilt up, and zoom in is frustrating.

Fortunately the user interface is a near replica of Diablo’s interface. Health is presented as a red bulb on the left, while mana is presented as a blue bulb on the right. All the secondary icons, such as inventory and character stats, share space next to either the health or mana bauble. Equally the inventories, character panel, skills trees, and so on all have that signature ornamental flare made popular in Diablo.

Controls aside the game has its share of gameplay quirks.

AI in this game is occasionally comical. For example I rescued two individuals from a werewolf onslaught only to stand around while these same two – who I might add are near death — begin charging into a mob of werewolves.

Throughout there are scattered monster bosses that are introduced with some sort of foreboding cut-scene. Yet upon their death nothing of value is dropped. Meanwhile you’ve wasted valuable health potions on an insignificant side-skirmish.

Next to the health bulb an "Enter Laboratory" button exists giving players the ability to portal out of danger and into safety. In the lab you can buy potions, armor, and weapons; even repair weapons and armor. When you step onto the teleport pod you are returned to the exact spot you left. This seemed a bit ridiculous as it tones down the difficulty.

I think besides the passÃƒÂ© story the worse aspect is audio. Sounds are generic. Music exists but in a very limited fashion and plays at unexpected moments. The worse has to be the horrid voice acting! At the end of completing my first quest one of the villagers dronishly repeats "thank you for your help." The opening intro demonstrates the worse example with a narrator spouting out vocally inflected dialog in what sounds like a desperately attempt to recreate Shakespeare. Yes, it’s that’s bad.

Between the corny story, abysmal voice acting, and micro-manage controls, all is not well with The Chosen.

However The Chosen is a solid game that didn’t require patching after installation and I’ve yet to experience game-stopping bugs.

Additionally this game will run on extremely old systems with settings maxed out. According to the publisher’s requirements only a Pentium III 1.4 GHz with a DirectX compatible 3D accelerator card (64MB+ RAM), 256 MB RAM, and 600 MB hard drive space is required. This game will also run on multiple versions of Windows ranging from 98 all the way up to Vista.

Truth is you are not going to get a caliber game akin to Diablo or Dungeon Siege. Instead, if you’re an action RPG fan looking to try something new to pass the time, The Chosen offers old fashioned hack n’ slash / spellcasting entertainment. At $20 The Chosen basically offers value over substance.