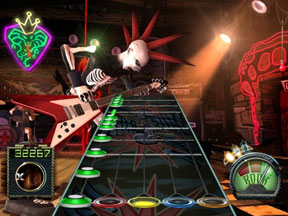 I’ve seen it before. A well known franchise is thrust into the hands of another developer, and it ends up in disaster. One I remember real well was Twisted Metal. When SingleTrac was in development with TM 1 and 2, it was great, what vehicular combat should have been. Then 989 Studios worked on TM 3 and it all went downhill. Thankfully it was rectified when SingleTrac returned for Twisted Metal: Black, but that’s not always the case.

Activision went through this as well. Look at what happened with Call of Duty. The first two titles were developed by Infinity Ward, and both games were exceptional, especially the latter on the Xbox 360. Call of Duty 3 was developed by Treyarch, and while it was a good game in its own merit, it was nowhere near the level of Infinity Ward’s work. Again, IW came back for Call of Duty 4: Modern Warfare, but that will be taken care of in that review.

But it seems that Activision is going through it yet again, this time involving their Guitar Hero franchise. The series was originally created by Harmonix Music Systems, a developer well known for high quality music titles. Guitar Hero 1 and 2 were no exception to their quality. However, we all know the story by now. MTV Games acquired Harmonix, and are now in the process of releasing their heavily hyped Rock Band. Meanwhile, Activision brought in Neversoft, best known for the Tony Hawk series, to take over on Guitar Hero III.

I, as well as many others, was very skeptical about the development switch. How could someone best known for skateboarding titles handle a new property with such a short time frame? Will they be able to recreate the same magic that Harmonix did? And even further, would the defection to MTV Games cause GH fans to make the jump over to Rock Band, and would this be the worst change to a beloved franchise since Coke turned into Pepsi (New Coke) over 20 years ago?

Thankfully it turned out that all my concerns were for naught. Not only does Guitar Hero III play as well as the previous two titles, but there are those who actually say that it might even play better. I might disagree on that but I do feel that the classic formula has not been changed and is as enjoyable as ever.

We all know the gameplay by now. Select a song, follow the notes on the screen, press down the appropriate fret button and strum the guitar when the note hits the bottom of the screen. Yes it should be old hat by now but when you play something so fun, so enticing, it’s hard to criticize.

But when I played Guitar Hero II last year, I did have one complaint. Most of the songs were too easy, even on medium difficulty. I even perfected a majority of the songs on my first try. That’s not the case this time. While the earlier sets start off easy, the later songs literally come from the depths of Hell (you will see) in terms of quality and difficulty. In fact, one of the game’s worst kept secrets involves what many people, myself included, consider the hardest song ever in Guitar Hero history, the insane Through the Fire and Flames from DragonForce. Even on Medium difficulty it is a nightmare to play. (I will admit I was able to get a perfect streak of 1,012 notes on Easy.) But on Expert difficulty, it is murder, almost to the point of being considered unbeatable by many. However, several videos on YouTube are contradicting that point.

As for the song lineup this year, it is definitely an improvement over GH2’s. Again there are some weak songs that I could really care less about (the seventh tier in particular lost my interest,) but there are also tons of rare gems. The fact that Metallica, who favored suing their fans over the whole Napster deal, would offer One as a playable song is amazing, but even more so is the fact that it is offered as a master track!

In fact, there are far more master tracks this time around than ever before. While the earlier songs will feature that classic "as made famous by" disclaimer, i.e. a cover song, the later songs end up as all masters. Nothing beats going through Cherub Rock while hearing Billy Corgan whine his way through the lyrics. Still, if only Paranoid (my all time favorite Black Sabbath song) was not a cover. Oh well.

Star talent also highlights GH III. Last year we may have had Primus supply a master track, but this time we have three well known musicians supplying their likenesses in the game. Bret Michaels (formerly of Poison and now a reality show community member) recorded a new vocal track for a cover of Talk Dirty to Me, and is also available as an on screen singer, a vast improvement over the Shaggy meets Frankenstein looking stock singer. Tom Morello (Rage Against the Machine) and Slash (Guns ‘n Roses/Velvet Revolver) are now available at first as boss characters too.

And that brings us to the boss battles. New to the series, these are one on one fights against the previously mentioned legends. Using special power ups that are activated in the same way as Star Power, these can affect your foe with broken strings (one fret button is disabled,) whammy bar attacks (no notes can be played until the whammy bar is freed,) double notes, higher difficulty notes, and lefty flips.

The boss battles are all a nice break from the normal songs, but nothing beats the final boss battle, with the Devil himself (although in this case he’s simply known as Lou.) The battle might be the same as before, but it’s the song choice that makes it special: a guitar based remake of the Charlie Daniels Band classic The Devil Went Down to Georgia. And to think I considered Free Bird to be one of the best finishing songs to ever come out. Whoever decided to use a Charlie Daniels fiddle classic for this track is either a genius or just insane, but it works! Originally the boss battle songs were not available to play outside of battles, but thanks to a Live download (which was available for free at the time of this writing, thanks to the Xbox Live is 5ive promotion,) they can now be played in all the modes.

But the game would not be good if the controller sucked. Again that’s not the case, as the Les Paul Wireless is without a doubt the best controller of the series. The construction is of high quality, the guide, start, and select buttons are easier to access (the latter two are now designed like knobs) and of course the fact that it’s wireless! Even better the control can be detached for easier storage, and can even have the faceplates changed. A word of warning though. Some Wal-Marts have sold Guitar Hero III with the previous X-Plorer controller. Be sure to check which controller will be packed with the game.

Visually the game is much smoother than before. Last year’s port of the PS2 was very sharp but the details here are significantly improved. However some of the characters look just downright strange, and as I mentioned before, the singer is scary looking! At least they all animate well, except for the somewhat robotic drummer.
Since this is a Guitar Hero game, we’d expect it to sound great, and yes it still does. Even the covers are high quality, much better than the travesty that was Heart Shaped Box. And as for the masters? Well, they’re masters. Nothing can be changed about that. Too bad The Metal by Tenacious D is a master track.

Online play is also included this year. One year too late in my opinion as I thought GH II could easily have it. Face-Off, Pro Face-Off, and Battle are available, as well as Co-Op Quick Play. I don’t understand why Co-Op career wasn’t made available online. Hopefully that will be added via a Live download.

What could have been a disaster at the hands of Neversoft turned out to be an amazing follow-up. Neversoft went above and beyond to make sure that Guitar Hero III played as good, if not better, than its Harmonix predecessors. Now, for Guitar Hero IV, how about adding some tracks from Steve Vai or Joe Satriani?