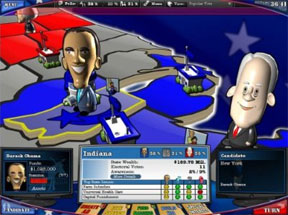 Can you unite Red and Blue?

Before we get started I should let you out there in reader-land know that in another life I’m a political reporter covering such crazy things as elections, campaigns, and the wonky policy decisions that take place in each of them. I’ve seen everything at the political level from president’s sex lives stripped naked to senator’s maybe making up words that cost them their seats, from councilmen admitting they’re out of their expertise to mayors playing a banjo and hoping it sways votes. In short, if it’s designed to fool the public into placing their faith in a candidate, I’ve seen it and mocked it.

Not only is it a job but it’s a hobby that I enjoy, too.

That said, it seemed a natural for me to be the reviewer for Political Machine 2008. A simulation that let’s one take the reins of a campaign and stump across the country whoring myself out for electoral votes? How much better could it get?

I admit, it was harder than anticipated to win this darn thing. Just getting down to planning the travel time and the cost of the campaign was a major learning curve.

The player can choose to be any of a few dozen real-world presidential candidates from George Washington to Mitt Romney and others (including one alien with a lot of money) or the player can create his or her own candidate. The Presidency doesn’t come easy, does it? Even so, it is very easy to become engrossed in the system of speeches, commercials, and fundraisers that controls the lives of the candidates for the nine months a standard game covers.

The hour or so a game can take can fly by and the ending can take you by surprise when it comes. It always seems like there should be more weeks and more time to make your case to the electorate.

The game mechanics are fairly straightforward. One builds campaign infrastructure such as headquarters and communications centers and such to promote the general knowledge of ones campaign. One can also hire surrogates such as consultants, speechwriters, spin doctors and smear merchants (as well as others) to provide boosts to improve ones own standing or damage your opponents’ positions.

The game uses a reasonably complex and accurate system to model how each candidate is doing in the state-by-state races that control the final victory in November.

Each state is controlled by how well known you are, how much your positions (both local and national) agree with that states voters, and what the voter identification of each state is by registration. It’ll keep you hopping and put you in the uncomfortable spot of knowing that a commercial in one state has the potential to undercut you in another.

Choose your issues and positions wisely. Complete pandering is clearly an option but one that has the long term potential to make life downstream harder than it has to be.

In all, Political Machine is a great deal of fun for a campaign addict like me. I’ve played it more than ten times through with different candidates and haven’t grown bored yet.

Warning: the game is significantly different playing a Democratic or Republican candidate. Be prepared for that. Still, it’s a great game and I recommend it wholeheartedly for those with the disease and those just interested in seeing how they’d do on the biggest stage there is.