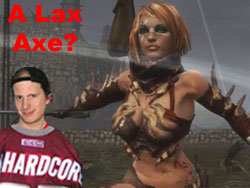 "What blasphemy is this?" These are the first words that Golden Axe’s lead character Tyris Flare says when she sees the destruction of her homeland. It is also the perfect act of foreshadowing, as I ended up asking the same question while playing Beast Rider.

To me, recreating an arcade or console classic can go one way or another: it can be done with great care to the original product; a true tribute to the fans of the series (such as Bionic Commando Rearmed or the recently released Mega Man 9,) or it can be done just as a quick cash in to sucker a new audience (such as Sega’s remake of Altered Beast that was thankfully unreleased in the US.) Sadly, Beast Rider falls in the latter category, and unlike Altered Beast, this one WAS released in the States.

Golden Axe: Beast Rider is loosely based around one of the three main characters from the original: the Amazon Tyris Flare as she attempts the stop the evil Death Adder from seeking control of all the Titans to control the world. Sure we have all the elements of the original arcade and Genesis classics, including fellow warriors Gilius Thunderhead (the dwarf) and Tarik (aka Axe Battler the Barbarian,) the gnomes (formerly elves) who provide magic, health and now money, and of course, the beasts.

But that unfortunately is where all the similarities end. For starters, Golden Axe, and its arcade sequel, Revenge of Death Adder, were meant to be simplistic, mindless, yet very enjoyable hack and slash fests to be played by two or four players respectively.

But Beast Rider is only a one player game, thereby taking one of the features that made the arcade games so much fun. Secondly, the worst thing in the game comes down to combat, if you can call it combat. While two buttons are used for heavy and light attacks (and pressing both at the same time result in a powerful strike,) it’s the blocking and parrying functions that cause the most frustration.

Even when trying to block or parry it seems almost useless because it has to be timed so perfectly that it becomes an exercise in anger management. That anger only gets worsened when fighting magic based minions.

Trying to parry back spells is a pain, but nowhere near as bad as the minions who drop huge boulders on you. It was just a matter of time before I looked into getting a new 360 controller!

And what about the Golden Axe, the mighty weapon that Gilius wielded in the arcade version? It’s now a throwing weapon, and even that has been butchered because of the frustrating camera that you end up fighting with along with all of Death Adder’s minions.

Even worse is the way to open certain gates. While some make sense by defeating a certain number of minions or by using a beast to break through the gate, some gates require Tyris to crucify minions onto spikes. I’m sure some religious groups will easily take offense to that.

Then of course, there are the beasts. When the original Golden Axe came out there were three types of beasts: a cockatrice with a simple tail whip motion and two dragons, one that spit fireballs and the other that breathed fire. These beasts have returned for Beast Rider but even they have been butchered. They control very sluggish when just walking. When trying to run they start to move a bit too erratic. The tail whip seems to work well, but why is it that when I have my beast breathe fire, it actually DAMAGES him? This never happened before and it’s hard to explain why it’s happening now.

Saves seem to be spread far apart and when having to deal with a large number of minions, it’s almost inevitable that Tyris is going to be overpowered. She can be resurrected, but only by picking up dragon statues (five at maximum.) However when they run out, it’s back to the beginning of the stage.

The graphics look like they came right from the original Xbox. With the exception of Tyris herself, who is rather meticulously rendered, the minions and all the environments are low detail and animate rather stiff. Even worse, when running, the screen appears to actually be tearing between frames? Has Secret Level ever heard of the term "Vertical Sync?" On the bright side, the game does run at 60 frames per second, when it’s not being bogged by slowdown, that is.

Dialogue isn’t much to talk about but it’s there. On the other hand the music is decent, and I was surprised to hear when fighting the gnomes and stealing their goods, I was able to catch a glimpse of the original’s bonus music. There are a few touches of nostalgia that help to break the frustration but it’s still not enough.

What was Sega thinking? One of my biggest pet peeves is seeing a classic 2D game butchered when made into 3D, and Beast Rider is a perfect example of this. In the end, I ended up going to my Xbox Live Arcade collection and playing the original again, and that’s what I’d recommend to anyone who wants to play this game.

Skip it and just spend 400 Microsoft Points on the original. It’s shorter, yes, but way more enjoyable, and you can actually have a second person join in, something the 360 version doesn’t even offer!