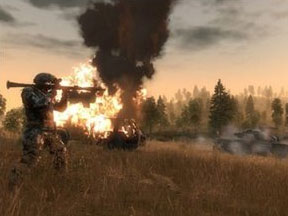 It seems as though just about every other game that comes out now is a shooter. Shooters are a great way to relieve stress. They give players all of the freedoms of being able to blow the bad guys away without actually putting anyone in danger. Some of the most popular shooters out there are of course the Battlefield games. The latest installment in the series, Battlefield: Bad Company, attempts to leave its mark among the many, many shooters on the market right now. And I’ve got to say, it does a pretty good job of it.

One of Battlefield: Bad Company’s greatest strengths lies in its ability to cater to both online and offline gamers. As online gaming continues to evolve, fans of shooters who don’t play online have been left behind. For instance, Call of Duty 4 has fantastic online play, but its single-player campaign was only about five hours long. Bad Company features a much longer single-player campaign, while at the same time maintaining great online play.

For the campaign mode, you are thrust into the role of Preston Marlowe, a soldier who has been placed into B-Company, nicknamed Bad Company, not without reason. Apparently stealing a helicopter isn’t smiled upon in the military. Who knew? As punishment for his crime, he is placed in the worst company the military has. While in the field, Preston and the rest of his company discover that a Russian mercenary, known as the Legionnaire, has been hired by enemy forces.

This piques the interest of the group, since it is rumored that the Legionnaire pays his men in solid gold bars. For anyone who has seen the movie Three Kings, the rest of the plot should seem familiar. For those who haven’t, all you need to know is that these soldiers can’t keep their hands off the gold and will do anything to get it. That includes committing acts of war.

While Bad Company has a great single-player campaign, the online play takes the game to an entirely new level. There are two different game modes to choose from. One of them, called Gold Rush, puts teams in the role of attackers and defenders. The attackers have the goal of destroying two gold crates per base. The defenders have the task of protecting the gold crates, while at the same time whittling away the number of attackers. If the attackers run out of reinforcements, they lose. By the same token, if the attackers are able to capture the four or five bases held by the defenders, victory will be theirs.

With such dynamic game modes, Bad Company has the groundwork to be a great shooter. And believe me, it delivers. This game is all about action and destruction. Almost everything in the game can be destroyed. This plays a major role in both online and offline gameplay. In games like Call of Duty 4, hiding behind a wall means safety from rockets and other explosives. In Bad Company, hiding behind a wall means waiting to become part of the ruble. Save for a few select sections of a building, almost every part of it can be destroyed. That means that camping online is virtually impossible, keeping the action flowing fast and furious.

Another great part of the destructible environments is the way in which they affect strategy. Attacking players aren’t forced to simply choose the open route to secure and objective; they can create their own by blowing holes through nearly every building in the game. This means that the defenders need to be on their guard for an attack from any point. Because of the varying strategies, teamwork is also a must. Again, Bad Company varies from other online shooters in this respect. One player can’t just run around and be the hero; every player must work together.

With a great balance between online and offline gameplay, Battlefield: Bad Company has the ability to be one of the best shooters on the market. What sets great shooters apart from the rest, aside from their gameplay, is the polished look and feel they have. Again, Bad Company delivers. The graphics are outstanding. Paradoxically, environments are brought to life by their destructibility. Rather than feeling as though you are standing next to a building put in just for scenery, players will feel that the world really is alive, since nearly every building can be interacted with and destroyed in some manner. Also contributing to the graphical quality of the game is the look and feel of the guns, with each one having a tremendous level of detail.

Complementing the graphics perfectly, the sound in Battlefield: Bad Company is phenomenal. Each gun has a distinct sound, making each weapon feel as though it is unique. The voice acting between characters is also extremely well done, giving the characters some personality. The audio quality in the game really helps to bring it to life, more so than in most other shooters.

Overall, Battlefield: Bad Company is one of the best shooters on the market. With a lengthy single-player campaign and absolutely fantastic online play, the game is deserving of praise. While there are many shooters that are flooding store shelves, this is one that shouldn’t slip under the radar. It gets 4.5 GiN Gems out of 5 for blowing the competition away.