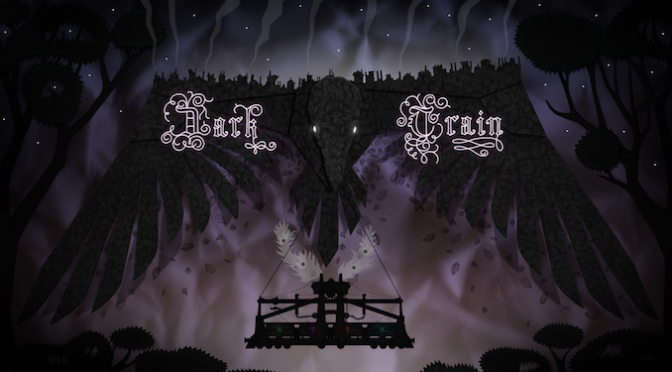 Once in a while a game comes along that is uniquely creative and a mastery of artistic achievement while still be an entertaining gaming experience.   A game that brings about human imagination and personal storytelling rather than being told every detail. Using ingenuity and brain power to solve puzzles with minimal assistance from the game gives this game a more intellectual quality while feeding curiosity and connecting the player to the environment. This game is Dark Train, a hauntingly beautiful, oppressive, and macabre world made of paper. Yes, paper as in all the elements inside the game are actual paper cutouts put into a digital gaming environment.

At first the game felt familiar and then when I was in a room with a giant knife and apple, it dawned on me, shadow puppet theater. The ancient form of puppetry that uses cutouts to tell a story between a light and translucent screen. Instead of a hidden puppet master you the player are the puppet master telling the story.

Without dialogue the movements, strange rooms, and situations, create a unique opportunity for the player to come up with a story about what is happening beyond the written prologue. Haunting music sets the mood for the experience and makes this oppressive industrial macabre world feel more bizarre and dark. The surreal feeling of the game gives way to a puzzle challenge that makes for a not so easy going game. Let us now dive into the artistry and challenge that is Dark Train.

The game has players take control of a mechanical squid called Ann 2.35f who is chained to the train. A train according to the story on the Paperash site is a self-contained model of the human world with different environments and places. Each environment is in a wagon and there are four wagons: a forest, city, graveyard, and pool. These are marked on the train with icons. Our mysterious train was created by an inventor named D. W. Tagrezburg and is to be delivered to a mysterious client. The game takes place at the beginning of this delivery journey following the death of the inventor. It’s up to our Ann; there are multiple Anns that the player encounters throughout the game, to see the train delivered to its patron.

Ann 2.35f, here on out I will just refer to her as Ann, is a simple mechanical being in the shape of a squid. She is chained to the train but can operate it and explore the different wagons and areas of the train. When it comes to these wagons they all have specific riddles to solve that moves the player to the next environment. There are many different environments that become available throughout the game. One of the tasks is to first make them available as all entrances are initially blocked by a barrier. Upon solving the riddle the chain will break and Ann can enter the new wagon.

Now some riddles can’t be solved at first. For instance in the first graveyard there is a church, when entering the church players will notice a missing cogwheel for the bell. This has to be forged but the foundry is not available until a button changing instances is unblocked. Changing instances changes the original wagon to a new environment so the forest becomes a foundry with a cog mold. Throughout the game Ann can pick up other molds that are used to forge items used to solve other riddles. Also she can pick up collectibles that are stored in her nest. We see the nest in the opening scene were we first meet Ann.

Once all the wagons are uncovered and the initial environments and instances explored then the wagons can be moved around changing the environments with a new set of puzzles. If you like puzzle games you would like this game. So many different environments to explore plus the rooms in the background city can keep players occupied for hours.

Beyond the environments that range from a forest, forested church, graveyard, city, holiday winter city, clock tower, forge, room with statues, raining city, a octopus cog room, and many more there are rooms behind the train and situations that Ann can interact with. I found a room with an electric chair that had to be activated, and the inside of a large industrial forge. Also what appears to be a giant apple in a room, but Ann can appear in different sizes. At one point there was a fire that I could extinguish by flipping the rain collector control to a fire hose.

On the train there are different controls that activate a lightning rod to start the train, a rain collector for the fire hose, and a fire button that releases a wedge that creates fiery sparks and can turn on candles. These can be flipped to activate other train functions or in situations. For instance during the journey other engines will come to stop the train if you can fend them off by adjusting the fire control they can back off. One time I was stopped and found some new rooms. Starting the train just requires lightening to hit the rod and you can also stop the train yourself or let it run out of electricity. Refilling fire, water, and electricity is done using the corresponding buttons. There is a lot more going on in this game then perceived at first. Still all created from real paper cutouts.

The thing I noticed was the game is set in a very industrial dark setting. This is where the game gets its oppressive nature. It is oppressive. I can just imagine this world clogged with smog from the industrial factories, depressed humans living their lives among the industrial complex, which goes beyond just the industrial revolution of steam engines and factories. Everything is mechanical even Ann.

However, Ann is unique among the depressing backdrop. Even in the winter scenes and lighted church with falling flowers it was oppressive. Ann stands out as a personable being, as hope in the dark place. She may be tied to the train but she has a personality all her own and I couldn’t help but become attached to this little character. She is also not very industrial looking but rather more living then the other Anns with a heart and maybe even a soul. Though not living she moved and flowed in her environments with grace and she felt alive in this dead quiet world. Humans are seen as silhouettes walking around train stops but it still feels dead with industry ruling the world.

Moving on to gameplay, it’s a very simple mechanic. Move Ann around with a mouse or controller and click for interactions when necessary. The gameplay is smooth and Ann moves very nicely in her environments. Clicking can interact with objects but many times players will need to move objects, which is simply aligning Ann with an object and pushing it. However, it can get more creative and you may need to carry something like light, electricity, or flowers to a destination. Collecting items is achieved by activating lights and clicking, which brings down a giant mechanical arm that picks up the object. Sometimes the object goes to Ann’s nest other times it will release the object at a new destination to solve another riddle.

It’s a game that anyone can play with the only real challenge being the riddles. These are difficult riddles that require the player to observe the environment and know how the train controls work. Observation, trial and error, or really good puzzle solving skills can beat this game. Even for those who are not the best at solving riddles it’s a great way to challenge the mind and in the end you will be a better puzzle game player. Well, that was my case at least.

Looking back at Dark Train and the creativity that went into it, the beautifully haunting industrial world with a touch of science fiction, oppressive music with musical cues when Ann interacts with objects, and the challenging riddles to solve, this game is at this moment one of the best puzzle 2D games I have played. The game is so unique with a character that is different from other games and a story that is as puzzling as the puzzles themselves. I highly recommend this game and would like to see more games made in this style that goes beyond just creating things digitally but goes back to an old form of storytelling with paper cutouts.