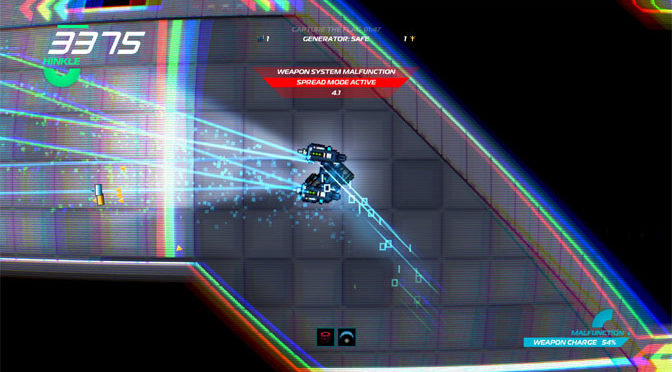 After a long day, have you ever just wanted to turn on something simple and mindless to play just to wash away the stresses of the day? Well then developer Bunnycopter’s 8-bit top down shooter Broken Bots may have a place for itself in your library. Once you load up the game you are introduced to a simple menu that offers the basics of “Quick Match” or “Custom Match” (not counting your basic menu options) and from there your over-the-top experience begins.

Once you get into a match, you will immediately notice the game’s 8-bit art style is very similar to that of successful 8-bit action game Hotline Miami, and the similarities don’t start there. The game’s core focus, depending on game mode, is simple; shoot other robots until they explode.

Everything is streamlined into eight buttons. Your basic W,A,S,D for movement and then E, Space Bar, Left Click, and Right Click for your actions and abilities. The gameplay is focused around you rushing around in a robot of your choosing, you continually unlock more as you gain rank, and engaging enemy robots with your mounted weapons, abilities or malfunctions.

Each of Broken Bot’s playable robots feel different and balanced with each one carrying their own stats. A robot with an automatic rocket launcher will hit hard but is unwieldy and big, making it an easier target. A smaller robot may be quicker and more responsive but is also weaker and more fragile. These small differences make finding a robot to match your play style easier. Since you have to rank up to achieve each robot, it may take some time to find the bot you are looking for.

Alongside your standard gun you have what is called a malfunction power which can either help you and your teammates or hinder your enemies. These range from increasing your rate of fire to disabling your enemy’s weapons. These are useful, but they seem to charge so slowly and are so easily ignorable you’ll find yourself forgetting to use it which is disappointing since they add an interesting angle to the game. You also have two abilities for your arsenal which unlock over time. Abilities include things like healing and a wave of energy that pushes back close enemies. All of these little details give the game a little more depth.

When it comes to where you will be using the abilities, you have access to a few different game modes. These include Team Death Match, Capture the Flag, King of The Hill, a game mode similar to Call of Duty’s hard-point with a constantly moving “hill” to capture. You also have a survival mode against AI, and finally you get a single player mode that is about five levels where you traverse through a map do a few simple movement puzzles then go fight a boss. While each of these modes are interesting and can be fun, they are all plagued by the game’s mindlessness. In the time I played this game, only once did I ever really understand what I was supposed to be doing in a non-Team Death Match game.

Seriously I had zero idea what I was supposed to be doing 90 percent of the time. There are few to no visual hints of “hey the objective is that-a-way” other than what appear to be arrows but since those usually mark other players they are about as helpful as a map of a foreign country drawn by a three-year-old not from that country. This problem is honestly a strange one. I say that because in the entire time I didn’t care. The gameplay was generally so wild and over the top I wasn’t really focused on playing to win, I was just playing for fun. This callousness is damaging to the game as a whole because while getting a win is certainly nice, it’s not really enough to make you care.

Another aspect of the game worth talking about is the AI. If a match can’t be filled with players (I never saw a full match of players honestly) then AI will fill the spots. This is good because finding a match was quick and easy. However, the AI is so strange that they are often little more than an ignorable nuisance. For example, one feature in the game allows you to hack enemy data centers which will cause a quick EMP. Now when I went to do this a respawned enemy AI vehicle would drive up, shoot me once or twice, and then leave. They would not actively attempt to destroy me just kind of hit me on the wrist for my transgression. This applies to combat as well; they rush in, shoot a little while and if they survive they run away just to do it again.

Like I mentioned before, the game is an 8-bit top down style game. It’s color pallet is hard neon reds and blues with a few other strong core colors. The game is very flashy and is enjoyable to look at. The style is very fitting and makes it more fun and chaotic. However, this visual styling works against Broken Bots specifically in its maps. Supposedly there are multiple maps, but I say supposedly because I can’t tell a difference. They all look the same. Maybe they have different shapes but I couldn’t tell because I spent most of my time at top speeds shooting things.

When it comes to sound, everything is solid including the guns and the pumping soundtrack. It all sounds right and contributes to the craziness of the core game.

To bring it all together, Broken Bots is a game that is a lot of fun in spite of itself. While it has a number of short comings I continually found myself enjoying the simple and chaotic gameplay. I think in the end Broken Bots is more than worth it’s SEVEN DOLLAR admission price. While chaos and confusion are common place in Broken Bots, its simple over the top 8-bit style is complimented by these things, making you want to keep on shooting.