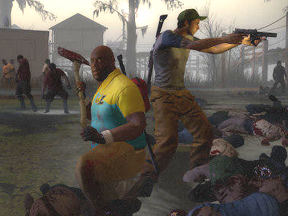 Everybody loves killing zombies. In fact, for a lot of gamers, it’s a favorite pastime. Unlike titles like Grand Theft Auto where you might feel a twinge of remorse (perhaps) when you mow down a lot of innocent people, with zombies it’s no big deal because, hey, they’re already dead. Oh, and they will eat your brains given half the chance.

While I enjoyed the original Left 4 Dead, it was lacking in a lot of ways, the biggest one being a complete dearth of storyline. You just played through the campaigns and shot everything that moved other than your fellow survivors, and that was pretty much it. I really wanted to know more about the four heroes, to feel for them and find out how they got together. But other than a couple quips here and there, we never knew much about them, and that left the original title a little flat.

Left 4 Dead 2 follows a new group of survivors as they attempt to outrun and outwit hoards of zombie enemies. The game takes place in the Deep South, in and around New Orleans, which gives it a completely different flavor than the previous title.

And we actually learn a bit about the characters. Nick seems to be some type of con man from up north, as he doen’t know a lot about the various southern heroes seen on posters, like a NASCAR great who comes into play in one mission. And he tends to rub some of the other survivors the wrong way, which is cool because these are four completely different people, so it makes sense that zombie invasion or not, they might not always get along. Rochelle is the new female character. She seems to have the fewest cool lines in the game, but at least you get to know her better than what’s-her-name from the original. Coach is a huge guy who probably coaches football. He’s always hungry and tells people about it, which leads to a lot of comic relief. And then there’s Ellis, a local through and through. You could call him a redneck and you would be right, but he’s really nice and comments on the area he knows, like pointing out where the gun store is in town.

The single player campaign follows the same basic formula as the first. You play through a series of levels infested by zombies. Your goal is to get to a safe room at the end of the level, where you can rest up, reload and get ready for the next sprint to a new safe room. Each level takes between ten and fifteen minutes to play, depending on how quickly you move and how much you tend to explore the area looking for special weapons or health or other items to help in combat. At the end of each campaign (a series of missions) you participate in a stand and deliver type of setting where you have to hold out for a certain number of minutes until rescue arrives.

The finale levels have been greatly improved in Left 4 Dead 2. In fact, some of them are really different. One is a rock concert for example, where you can trigger environmental effects to kill attacking zombies. And in one level you are trying to fill up the gas tank of a car so you can drive away. How long you have to stay put depends on how quickly you can grab enough gas cans and run them back to your vehicle.

The levels themselves also seem a lot more diverse. You will find yourself indoors and out, in wide open environments and closed into tight tunnels. This is pretty cool because there are a variety of weapons now and different ones are better or worse depending on the situation. And there are some cool tasks you will have to do as well, like running down the tracks of a rollercoaster, or stealing soda from a store that seems to be protected by zombie security, to keep things interesting. And each level logically follows the one before it, so you know why the survivors are where they are.

In addition to new weapons like the military sniper rifle, the AK-47 and the magnum pistol, you also have the option of carrying a melee weapon. If you do, it takes the place of your pistol slot. Melee weapons range from the makeshift (an electric guitar that plays a cord when you pound someone) to the traditional (bats and swords work well against zombies) to the insane (a chainsaw that cuts zombies down like butter, but runs out of gas eventually). Certain characters like Coach tend to gravitate to melee weapons when controlled by the AI, which makes sense, while others like Nick almost always hang on to their pistols.

The biggest disappointment is that the AI of the survivors is still not too great. Its perhaps slightly better than the original, but they still won’t pick up the many pipe bombs and Molotov cocktails lying around, and won’t grab items like gas cans when you are trying to do things like fill up a car so you can escape.

There are a few new special zombie types in addition to the Tank, Witch, Smoker and Boomer from before. They are now joined by the Jockey who tries to ride characters to their death, a Spitter that spews acid and a Charger, which is kind of like a mini-Tank that is much faster but easier to kill. Also the AI of the old specials is changed a bit. The Witch now wanders around, if slightly, so you won’t get stuck with her sitting right in the only doorway out of an area with no chance to sneak past. If you are lucky, you can duck behind something and get around her as she moves in most cases. Also, either the weapons are much more powerful or the hit points of the specials has been lowered, because it’s now possible to do things like kill the Witch at long range before she crosses a field and swipes you. That was really hard in the first game, but more possible now. Also, the Tanks don’t seem to be able to absorb a full clip of most weapons and keep on coming.

The biggest flaw of Left 4 Dead 2 is the same as with the original. If you are mostly a single player gamer, then the game is very, very short. It’s a bit longer than last time, but those five campaigns can fall to a good shooter in about six hours, or less if you really book it. I took my time and explored a bit, the game does not seem to push you quite as much as the original did by sending out hoards against slower groups, and I had a good time with all the campaigns completed in about eight hours.

Now, that might not be enough gameplay for some people to plunk down the cost of a game these days, though it didn’t hurt Modern Warfare 2 any and I think there is a longer single player campaign here. But the real strength of Left 4 Dead 2 is in multiplayer.

In the standard Versus mode, its survivors trying to get to the end of the level, with the special infected controlled by real people. The balance of power has shifted quite a bit in favor of the zombies now, with more options and specials to play. Also, the Spitter is really powerful, giving the undead side a ranged attack that can wipe out entire groups of survivors if used correctly.

A whole new mode enters the game with Scavenger gameplay. This is a lot like capture the flag. The survivors try to grab gas cans scattered around the map and bring them back to a generator while the undead players try to prevent that from happening. Given that this was my favorite type of level in the single player game, it was nice to be able to run a dedicated multiplayer version. And I didn’t even mind playing the zombies, especially if I could be the really powerful Spitter.

In the end, Left 4 Dead 2 is a much better game than the original, even though it shares a few of the same flaws. It looks great, sounds good and plays well. But if you are strictly a single player gamer, there are probably better games to spend your money on, though I doubt anyone will actually be disappointed by the title. After all, killing zombies is a favorite pastime.

Cons: Short single player experience, AI is still pretty stupid and refuses to pick up any type of grenade.