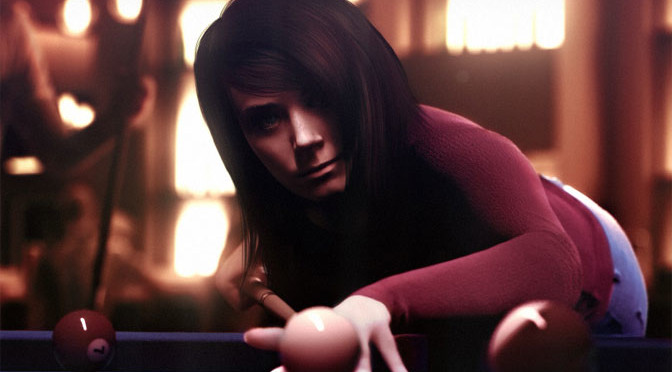 Pure Pool for the PlayStation 4 and the PC immerses players into the game from the first moment. Everything from the subtle physics of the billiard balls to the background noise of the pool hall lets you enjoy the experience. Just like VooFoo Studios other offering, Pure Chess, the player can pick the color of the table, the volume of the music and how intrusive you want it to be. You also have a choice of 8-Ball, 9-Ball, Killer and some tutorial games.

This is a leap forward from VooFoo’s first pool simulator game Hustle Kings. This game is similar to Hustle Kings in that is has an aiming line so you can see where the cue ball will strike but it dispenses with an overhead view. Like Pure Chess, it tries to keep you at a human level of play.

The camera always reverts to a player ready to take a shot, although there is a, “stand up” mode where you can walk around the table. This keeps the game moving and prompts the player to take the shot. Not a bad thing if you are playing online.

Taking a shot, while simple in method, is tougher the further you have to shoot. Your aiming line is sharp for short shots but dissipates at distances across the table. You also have lines that appear for where your ball will travel after being struck, but the sharper the angle the more diffuse the travel lines become.

This elegant method of aiming helps reproduce how hard a “long shot” is and how uncertain a shot becomes the more oblique the angle. There are rewards that you get for “potting” a tough shot or beating someone who is a higher skill level than yourself, and it pushes you to work for the win.

It says a lot for VooFoo that the player can pick up how to hit hard or soft, bank a ball or pull back for a higher view with just a few motions on the thumb controls. It gets the player into the game with the least amount of control contortions.

8-Ball is great if you want to play the regular game of stripes and solids. It lets you enjoy a game of pool while learning the mechanics of the system. It is the staple game of all pool simulators.

9-Ball for me was the best. The screen gives you reminders on what ball you need to hit next and can let the novice have a better chance of beating the more experienced player. The challenge of sinking the balls in order also gives you a chance to “snooker” your opponent into a difficult shot.

As you can tell from the vocabulary of “potting” and “snooker,” this game has British roots. The British vocabulary adds to the charm of the game. So many simulation games try too hard to be scrubbed clean of any character that they seem bland.

Pure Pool does not fall prey to abstract physics like other simulation games. Instead of making any shot’s outcome clear or looking down on the playing surface, they make it a more complex, limited and human physics. The harder shots in real life are made harder in the game; the playing surface and the viewpoint of the player stays at a human level. Even the balls slow to a stop in a realistic fashion.

These deterministic details make Pure Pool a great simulation game. Its excellence comes from not thinking “outside the box” but by building within one.

Pure Pool earns 4.5 GiN Gems. Check it out and let me know what you think in the comments below.