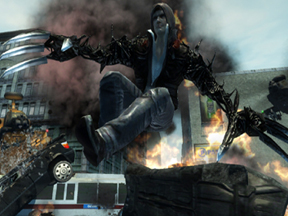 Wolverine + Crackdown with a dash of RE 5

Three weeks ago a virus was released in Penn Station and you woke up in a morgue.

After taking out a military squad and a few creatures, you will get to know the game a little better, so it’s a bit like a tutorial. Then you meet with a mystery man whose face you cannot see.

You have less than an hour to kill the last person responsible for the virus. But Prototype then takes us back 18 days earlier where you are in the GENTEK morgue, right before you are cut open for an autopsy. One thing is for sure, something is different with you, and Manhattan is under military quarantine.

Your name is Alex Mercer, a former doctor working with a virus code named "Blacklight" for GENTEK. You soon team up with your sister Dana, who does some digging to find the ones responsible and help you discover just how far the rabbit hole goes.

The story will unfold not only from completing main missions but also from consuming "Web of Intrigue" labeled individuals. You will find these people marked on your mini-map while in free roam, doing a mission, and/or completing an event. Consuming them enables you to see their memories, acquire their skills, and assume their appearance. I will suggest not skipping the memory movies. This is one story line that you will not want to miss. It tells the tale of a dark conspiracy 40 years in the making.

The graphics of the game are good, but lacking in certain areas. The city landscape is littered with cookie cutter buildings for example. Central Park and Times Square are distinguishable, which does help bring a more realistic feel to the game’s location.

The action scene graphics however do make up for the lackluster landscape. Alex has deadly shape-shifting powers which you will upgrade by obtaining evolution points. EV points are obtained by killing or consuming enemies and by completing missions and events. The categories of upgrades are powers, movement, survivability, combat, disguise, vehicle, and weaponry. Your powers include blade, claws, defensive, Hammerfist, Whipfist, Muscle mass, and sensory.

Once I upgraded Whipfist, I was able to grab an Apache chopper in the air and hijack the craft. Leveled claws power unlocked an attack called ground spike where you transfer biomass underground to erupt, at a distance, in a spray of large spikes to impale enemies After upgrading my critical mass I unlocked devastator attacks, which are accessible when you push your health bar into critical mass on the meter. One of the most visceral attacks of the game is the tendril barrage devastator, where biomass bursts out of your body in multiple tentacles to impale nearly everyone in your immediate area.

The action slows down a tad when pulling up your disguise power or action menus, allowing you a little time to perform the task required. The last powers used can be toggled on and off through the d-pad to quickly switch between them. Your health regenerates and you are able to upgrade to speed up the process. You can gain health at any time by consuming any living person.

Alex moves through New York City with free-roaming Parkour-style fluidity. Parkour is a French term for focusing on moving from one point to another in a smooth, efficient, and as quick way as possible using only your body. Basically a philosophical premise, that any obstacle, physical or mental, can be surpassed.

Alex is more than human so nothing is an obstacle for him. The way your character moves and the ferocity of his attacks makes Prototype pure fun to play. You are able to scale the side of a skyscraper with ease and jump off the top to glide over the city.

There are multiple combinations to be made with your abilities and different events and missions to use them in. The events range from movement and glide to kill, war, and consume (military or infected). Destroy hives for EP bonuses and infiltrate a military base to bring it down.

The collectable orbs are all over the island in addition to the hints littered about. I can go into free roam and lose track of time while scaling, jumping, and gliding through NYC.

Prototype does not leave you when the credits roll so no rush on making sure you got every orb, or did every side mission cause there is always the second time around with game+ mode. The replay value of Prototype is excellent.

The ending leaves some questions un-answered and with Prototype topping the June NPD sales chart with 419.9k, I would expect a sequel.

Prototype’s rich storyline and explosive action were developed into a comic book mini-series (6 issues) with issue one released in April this year by Jim Lee’s WildStorm Productions, a subsidiary of DC Comics. Time will only tell if there is a movie to follow.