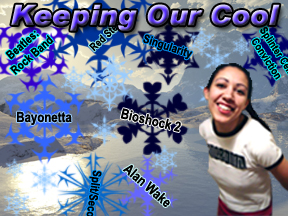 It seems that everyone's getting their knickers in a twist about a few release dates slipping in Q4 of this year. The industry has issued a collective sigh of disgruntlement, as a glut of 2009's "hotly anticipated" titles has been pushed to 2010. The old flexible release date isn't anything new in the game industry, but everyone's in a tizzy about recent slippages, including our very own Todd Hargosh. However, I'm all for release date slips — if it means I'm going to get a better game in the long run.

As the lazy days of summer do their thing, leaving us gamers twiddling our most agile of thumbs, publishers have been announcing release date delays left, right and centre. It all started with Bioshock 2, which was quickly followed by Mass Effect 2. It seems like all of 2009s major sequels took a tumble right into next year. Take Two has pushed Red Dead Redemption and Mafia II back for a 2010 release. Red Steel 2 is also slipping, which may not be a bad thing, if the first one was anything to go by. And Heavy Rain is also failing to make its debut in 2009.

The latest victim of the 09 delay syndrome is Splinter Cell Conviction and it's all proved too much for Hargosh, who vented his spleen on the subject in last week's column. I think he needs to cool his boots. Delays are frustrating, but they aren't necessarily a bad thing. Many a good game has been delayed, although the same can be said for many a bad game too.

With such a promising run-up to Christmas stretched out before us, the killer titles are looking thin on the ground now. Assassin's Creed 2, Brutal Legend and Left 4 Dead 2 are still fighting the good fight and promise to be around for some seasonal gaming. And of course Halo 3 ODST is solid as a rock. Maybe this could be the cause for all the ship jumping and running away of other titles. The prospect of competing with Halo at Christmas appears to be too much for some to bear.

I think Todd needs to play more MMOs. Then he'd know the true value of the release date slip. The way I see it, if a game is delayed to allow the development team more time – go for it. Hargosh would be the first to lambaste a rushed release and clunky gameplay. It's much better to sit tight and wait, rather than doom mongering from a dark corner.

In the middle of a recession, people don't have as much cash to flash, so fewer games this Chrimbo will give everyone a bit of financial breathing space. Just because we've always had the best titles packed into one Quarter doesn't mean it's the way to go. I would love to see a steady stream of great releases throughout the year, rather than having to slog my guts out for three months, getting through titles as quickly as possible, in order to keep my finger on the pulse.

Contrary to Todd, I don't think delays are bad for business, especially if the end product is of a better standard. Of course the gift-buying season is important for the industry, but I don't think we should be putting all our eggs in one basket.

We need some summer blockbusters too. I think it would be much better for business to give releases some breathing space, rather than the frenzied competition of the Christmas retail period, where the little guys get lost and the size of your marketing budget is king.

So, I think a little delay can be a healthy thing. After all, it didn't do Halo 2 and GTA IV any harm.