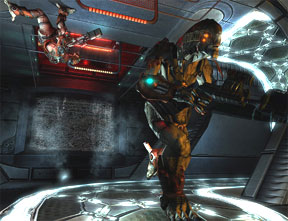 Prey has been on the development block ever since 3D Realms announced all the successors to Duke Nukem 3D. This list of titles included the released Blood and Shadow Warrior, but Prey fell into limbo, as well as the infamous Duke Nukem Forever, a title that is delayed so much that it has become the brunt of many jokes. I even went as far as referring to DNF as "Duke-Never Finished." However a few months ago there was a PC Gamer cover that showed a near finished build of Prey, which I took with a grain of salt, especially when a little blurb on the cover said "Duke Nukem Forever: We Played It!" Surprisingly, not only was Prey on the level, but it was playable at E3, and also on route for an Xbox 360 release.

But how well could a title in the works for so long turn out? After all, we went through this same thing with Daikatana a few years ago, and we know the results of that sad story. Lucky for us, this is not the case. Despite a few minor gameplay flaws, Prey turned out much better than expected, and only systems like a next gen PC or Xbox 360 can handle the final, beautiful product.

We’ve seen Native American first person shooters in the past, namely the Turok series, but they sure do not approach the cool factor of Prey. (And yes, no Tobias Bruckner is definitely a good sign.) Tommy is a mechanic living on a Cherokee Native American reservation, but detests his heritage, and will do anything to get away from it all. However, his girlfriend Jen is faithful to her ancestry, and wants to stay where she is. Tommy’s grandfather, Enisi, also wants Tommy to remain true to his tribe. However, his faith will truly be tested when an alien force arrives and abducts all human life to eventually be used as food.

Despite being taken aboard the invader’s ship and transferred to a space slaughterhouse, a resistance race called the Hiders sabotage the food transports, allowing Tommy to escape. He eventually finds Enisi, but it is too late, as his grandfather is killed in the slaughterhouse. Tommy swears vengeance to Enisi and vows to rescue Jen, but in order to do so, he must learn to embrace his Cherokee lineage. That’s pretty cool.

At first, Prey might look like a typical first person shooter, but eventually you’ll find out that the alien "Sphere" is not like any environment seen before. Certain walls can actually be walked on, as well as the ceiling, and gravity can be altered too, making any wall a floor. Portals also can generate out of nowhere and allow easy access from one area to another.

And if that is not unusual enough for you, the first taste of death is when the game really gets strange.

Tommy is reunited with the spirit of Enisi, who teaches Tommy the ways of the Cherokee, and his first lesson is that his spirit is not imprisoned in his body. Whenever he wants, Tommy can part his spirit so he can go anywhere his body cannot. Need to get through a forcefield? Just use the spirit mode to deactivate the control panel.

In addition, the Spirit Mode has a new weapon, a bow, that will kill anything in the real world as well.
The spirit bow comes into play whenever Tommy runs out of health. At this moment, Tommy is sent to the spirit world where he can restore both his physical and spiritual energy before returning to the Sphere.

This non-dying does have its good and bad points. The good side is that we no longer have to deal with cheap deaths leading back to respawn points, but it also makes the game easy, perhaps a bit too easy.

Weapons are also limited compared to some other first person shooters. Despite starting with a pipewrench, Tommy will eventually get an assault rifle that can double as a sniper rifle, an acid shotgun, a rocket launcher, and spider like creatures that can be hurled like grenades. But the most unique weapon has to be the Leech Gun, a weapon that draws power from nodes located throughout the Sphere. When attaching to the node, the Leech Gun can become a chaingun, a freeze ray, and even a high powered shock rifle! Still, only six weapons seems a bit light.

The other minor problem comes in the form of the shuttle. At times, Tommy can pilot a shuttle armed with a machine gun and a tractor beam. While the shuttle provides a unique perspective, and can be fun to use in combat, wayfinding can be a pain sometimes, approaching Perfect Dark Zero status in confusion. Still, it’s a unique change from all the first person combat from time to time.

Multiplayer on Xbox Live is also a concern. Only DeathMatch and Team Deathmatch are available, but the real concern of MultiPrey is the game lags significantly at times. It makes playing online a chore sometimes rather than an enjoyment, though this of course does not affect the amazing single player experience.

One of the best things about the game are that Prey’s graphics are amazing. Those who were disappointed with Quake 4 on the Xbox 360 and its horrid frame rate will be pleased to know that Prey runs quite smooth. There are breakups on occasion, but as a whole it is amazing to look at, especially with all the effects that are taking place. Prey’s modified DOOM 3 engine truly screams out next gen.

The same can be said about the audio. The voice acting is top notch, especially from Native American actor Michael Greyeyes, who plays Tommy. In his role we hear the disdain he has towards his Cherokee roots, his side comments as he explores the Sphere, and his eventual acceptance. Jen is played by another Native American, Crystle Lightning, who at times does sound like the typical damsel in distress. Veteran actor John William Galt plays a very convincing mentor in Enisi, while the biggest surprise comes in the form of radio announcer Art Bell, who provides his own insight on the alien invasion in his unique way.

The game’s theme music truly has a Native American flavor as well, but the soundtrack includes tracks from Blue Oyster Cult, Heart, and Ted Nugent, to name a few, so be prepared for an audio feast.

Prey has been a long time coming, and the wait was well worth it. The fact that Tommy cannot die does make the game a bit too easy, but it is still a heck of a ride, and a worthy title for any Xbox 360 or high end PC owner. First person shooter fans will definitely not be disappointed.

However, true fans should look into picking up the Collector’s Edition, which in addition to the game, includes pewter figures of Tommy and a Hunter, a booklet on The Art of Prey, and a free download of the entire Prey soundtrack, all packed in an impressive metal case.