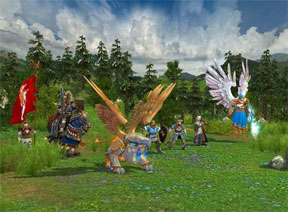 Having played the Heroes series for over 15 years, it’s nice to see a game that evolves and adds the latest technology, but stays faithful to its roots. You may not know this, but the Heroes series was based on a little game called King’s Bounty that was created back in 1990.

I played King’s Bounty first on a Commodore 64 (if that does not date me, nothing will) and then eventually on a PC. The game featured some great turn-based combat, exploration of a dangerous map, recruiting new creatures for your army, and even a bit of a treasure hunt.

The game was so popular that New World Computing (eventually 3DO) founded the Heroes series based on it. And the game has taken off ever since.

Now, 15 years after it got started, Heroes of Might and Magic V emerges as a solid turn-based strategy titles, fighting to make it in a real-time strategy world. Don’t get me wrong, I do love a good real-time game, but there is something about turn based strategy that really forces you to put on your thinking caps.

The biggest change most people will probably notice is that the series has finally made the jump to true 3D graphics. You can rotate the map, zoom in and out and pretty much see things from any angle you choose. And this goes for both the main map screen and the turn-based battles. Can’t see a unit hiding behind a wall? Just rotate around it and gaze at them from the other side. And they thought they could hide from me?

The graphics a gorgeous. Many people complained that added 3D would ruin the series, but it’s safe to say they were wrong. The graphics do look incredible, but they never get in the way of the game. They waver between being realistic-looking and also like a fairy tale world. Think of them as a gorgeously animated story book and you will have the right picture. Just looking around the revealed part of the map is a treat.

The one graphical complaint I have is during the cutscenes. It’s obvious that developer Nival Interactive is quite new at this type of thing. None of the character’s mouths move, yet the camera insists on zooming into them as if to say "look, we don’t know how to sync people’s lips correctly — or at all really!" Some characters have full face helmets, so this flaw is less obviously. Anyway, it does not affect gameplay in anyway, and as such is just a funny annoyance.

The other thing you might notice is that the story is not just brushed over this time around. This is easily one of the richest storylines to ever grace a Heroes game, featuring a cast of characters from all the game’s races. There are even several minor characters that play a part in advancing the plot. The voice acting is very good as well, and almost makes up for the lack of lip movement.

Like any good story, things are not quite what they appear to be at the onset and many secrets are revealed as the game moves forward. Oh, and the world itself is a little bit darker than you probably remember, for those of you who are really paying attention.

This time around there are six different races that you can play, and unlike some wargaming titles, they are actually very different from one another. The demonic Inferno race for example is all about taking the initiative in combat and doing a lot of damage, while the mainline human Haven troops don heavy armor, take longer to move in combat, and can absorb a lot of damage in their mostly static formations while powerful ranged support troops wither attackers. And the undead Necropolis faction has huge but weak formations, balanced by tons of magical energy.

You can even recruit units outside of your faction. In the daemon campaign early in the game, you have to recruit some of the elves from towns you conquer. While not really an RPG, these units nonetheless do not like working for a daemon and have exceedingly low morale. This makes them miss turns in combat from time to time, especially when fighting other elven units.

When you conquer a city you normally have to defend it, and some campaigns are all about defending cities. This is done by directly building up the defenses with walls and moats and archer towers and also lairs where you can recruit troops. This requires you to balance your limited resources, which are gained by simply picking them up on the map or by conquering mines, which will continually add to your stockpile. But there are never enough resources for everything you want to do.

Finally, as you conquer more and more, your character will go up in level. This lets you specialize in different skills from summoning monsters to help you to healing or inspiring your troops.

The single player game is fun, but of course multiplayer is a real treat as well. You can play with up to four people on the same computer in a hotseat game, or online with lots of people. Whenever I checked, I found plenty of people willing to challenge me.

In the end, Heroes V in a lot of ways is the best of the series. It has the best plot, the best creatures and by far the best graphics. If you like turn-based strategy games, you won’t get any better than this.