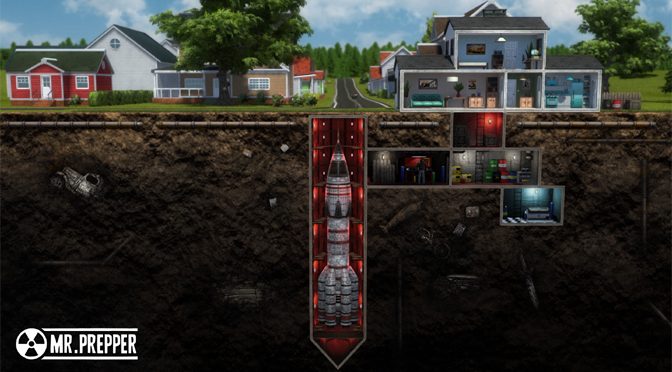 Sometimes you just want to bunker down with a good game and enjoy yourself, throwing yourself into another world and forgetting about what’s going on outside- whether it be pandemic, natural disasters, or mind control waves from satellites of unknown origin. With Mr. Prepper, you can bunker down literally, in that you can start your own underground base in preparation for when the world goes to pot. 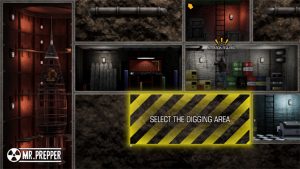 Mr. Prepper is a 3D game that takes place entirely in a 2D plane- similar to a game like This War of Mine. The game opens with the titular character, Mr. Prepper, botching an escape attempt, getting caught by the authorities, and getting placed on probation with intermittent inspections to ensure that he’s not hiding contraband. Not all is well in the idyllic suburban town of Murricaville- government control is so strict and stringent, propaganda is so rampant that you’d think a fox is telling you current events, and whispers of mind control radio waves make you think that not everything is on the up and up with your neighbors.

The only solution, of course, being to build your own underground bunker and an escape rocket ship so as to effectively escape the suburban hellscape that is Murricaville. The problem is your probation- every so often an inspector will waltz through your home, open cabinets, even inspect your electricity and water usage. If your activity is too suspicious, you might wind up failing your inspection and get carted off to jail, effectively giving you a game over. Did you take too many of your household items and break them down for components? Doing this too much could result in your arrest, so you need to be careful about disassembling items like your computer without replacing them before your next inspection. 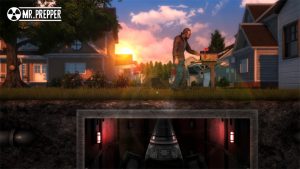 Constructing a secret base under your suburban home sounds simple, but you need loads of materials, and Mr. Prepper regularly needs food and naps- imagine controlling a character in the Sims, but mixing in exploration like a more clunky version of This War of Mine with the base building elements that need to be micromanaged a la Sim City. There are a lot of very addictive elements at play here- you can make your own underground garden to give you consistent food, but then you have to manage all of your water production because your use is heavily monitored. You have to go out and collect metal and wood for most of your crafting, but there’s also plastics, electronics, and more that need to be salvaged from things you can disassemble. Though, do be careful not to break down too many of your home electronics- Big Brother is watching, and a suddenly missing computer could cause the investigator to become suspicious of you and visit more frequently.

Trading in Mr. Prepper is all done through the mail. After unlocking new traders, you can buy food, bait for animal traps, or even sell things like animal pelts or electronics. Since almost everything in Mr. Prepper can be used in a crafting recipe, it can be important to sell off unneeded items to keep a solid flow of goods that are harder to come by in the world. Exploration is performed by using a sign post to jump to the world map, and then you select the location you wish to visit. It’s recommended that you take a nap, drink energy drinks, or eat jam to keep your stamina high when exploring. 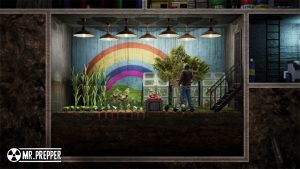 Each location has multiple levels you can explore, usually with only one of them being available to you at first. As you explore, you’ll find things you can repair to let you advance to deeper levels, so while every level of the forest is good for finding wood, you can’t find the necessary item for making energy drinks until you hit at least the third area. The mines are an excellent location for stone and metal, and there’s also the desert where you can find rattlesnakes and one would imagine cacti. All of these ingredients will help you either stave off starving or will further your secret plan to escape before all of your preparation is for naught. 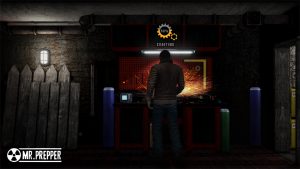 There’s a subtle addiction with Mr. Prepper- because your overall health is tied to your stamina and hunger gauges, you have to pretty regularly let your character sleep and scavenge for food regularly, whether it be by baiting traps and capturing harmless woodland creatures in the forest or growing your own food in your bunker using careful lighting and planter setups. You can cook whatever you hunt or grow, and do be sure to use up what you scavenge before it spoils, though refrigerators can reduce food decay. There’s always a sense of incremental progress in Mr. Prepper, and honestly it can keep you keep you coming back day after day, expanding slowly but surely, hiding all of your goodies from the inspector who could mean a swift game over. 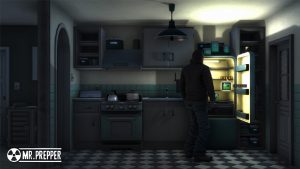 Currently, Mr. Prepper is in its beta phase, so a good 10 hours of play was exhausted before realizing that there wasn’t quite anything else to do, yet, but so far the game is very promising. There’s something on the horizon- something is going to happen, and you can’t put your finger on it… well, you could, but every time you get close an NPC tells you that this is as far as you can get in the demo version. There is a lot that could use improvement come the full version of Mr. Prepper’s release: Some items clearly have developer descriptors instead of names, and some items are flat-out labeled incorrectly (like a seed referencing an entirely different vegetable), but those are all easily fixed or worked around.

The combat definitely needs some polish, though, as it can be very hit or miss. You can enter situations where you click to attack an enemy but for some reason the character says, “I can’t get there!” as if you just instructed him to walk into the wall, or something (and this happens with enemies who aren’t in front of walls that can be interacted with; I don’t know from where this problem stems). Blocking also sometimes doesn’t work, though the combat is basic enough that sometimes just stepping away and then clicking to attack works better, so keep that in mind if you’re being attacked by wolves and hold the block button only for nothing at all to happen. For the most part, though, combat is click on the thing impeding your progress until it is dead, and make sure your weapons aren’t about to break. 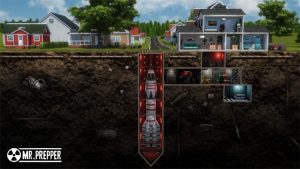 Overall, I’m excited to see what comes from the full version of Mr. Prepper- it’s very interesting, and much of the story is alluded to, but can’t be viewed yet. The visuals look solid and the game runs quite well at a fairly consistent frame rate on a GTX 1070, though there’s not a lot of variety in terms of music given how long you’re going to listen to the same track. What’s currently present needs some polish, but there is a lot of fun to be had with this game. The release date is currently set for around a month from time of writing, so fans of resource management games will have something to look for come March.