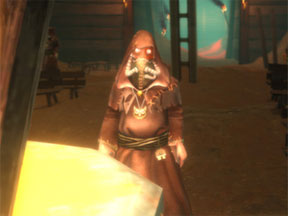 I’ve become a bit of an aficionado of post-nuclear war RPGs without really knowing it. Starting out with Wasteland and the original Fallout and moving up through S.T.A.L.K.E.R. and New Vegas, if there was an apocalypse involved, I was there. And it’s been a while since I saw anything really new, which is why it was so cool to find Krater from Fatshark. It takes us all the way to Sweden, to see how they handled the end of the world.

But there are a lot of new things about Krater more than just the setting. The really neat thing is that while the developers pay homage to the top-down RPGs of old with a similar style and interface, they also have done a lot to make Krater different than anything else out there today.

For starters, you have three characters instead of one. But none of the three characters is actually ‘you’ in the game. You are more of a mercenary leader, hiring and firing (or more likely replacing losses) and getting various jobs done around the map. You see, no character is safe from permanent death, unless you play on casual mode. In normal difficulty and above, someone who takes enough damage and is knocked down enough times will die. Thankfully, there are lots of mercenaries who want to work for you, if you have the coin. Even if you are playing on Casual difficulty, you are probably going to want to upgrade your team over time with people better than your starting heroes.

I have to admit that playing three different characters in a real-time game seems a bit daunting at first. I had images of everything moving too fast, of dying because I couldn’t give orders fast enough. And if you are a pure strategy gamer, this might still be a problem. I have to admit I would have probably preferred a turn-based combat interface, but I did come to like the real-time action in Krater as well. What the developers did was simplify the powers of each character to the point where controlling them is not has hard as it first seems.

Each character has two main powers which can be activated via a mouse click or with the hotkeys one through six. And because you are only controlling six powers, it really does become second nature fairly quickly. There are four character classes to fill your three slots, so you can mix and match them a bit depending on your mission.

The four classes (going into standard RPG terms here instead of the Swedish words used in the game) are a tank who can take a lot of damage, a crowd control guy known as a regulator who can slow and stun enemies, a healer and a damage per second guy. I think the healer is pretty much needed in any build that plans to travel anywhere in the game, but the other three can be rotated based on how you like to play, or the tactical considerations of the mission. Lots and lots of weak enemies will call for a regulator so you don’t get swarmed, while big boss creatures will be best killed by a tank and DPS combo, the old ‘tank and spank’ strategy. If you’re careful, almost any combination will work fine for general exploration.

The other interesting gameplay element is a heavy emphasis on crafting, and I mean really heavy. It’s almost not optional. Weapons and gear will change properties depending on what materials you put in them, and that can change your six major powers as well. Thankfully crafting is not very hard to master, and was actually a pretty fun perk of the game. I saw what was an effective strategy for survival, for me anyway, and crafted items to maximize those skills. Of course you can also find loot in the game, though the drop rate is less than say, Diablo III, probably to keep the focus on crafting items for yourself instead of just grabbing everything you can in the world.

Like any good RPG, even an action one, Krater has a great plot. And it was nice to see the world through the Swedish, with names reflecting that country’s culture and overall feel. Basically you will be defending Krater, which is an area of towns that sprung up around a nuclear war crater. Inside the depths are lots of secrets that many groups are trying to discover. It’s a lot more than that as you will quickly learn, but that’s the 10,000-foot overview.

Graphically, the game looks amazing. So much attention to detail has been put into almost everything that it’s a joy just to look around sometimes. Dungeons, which are randomly generated, don’t quite live up to beauty of the surface world, and especially the towns and settlement areas, but keep the eye candy going strong. Combat effects also look great and are unique enough that it’s easy to tell what’s happening even when things are moving quickly. As a cherry on the top, the overview map you look at when traveling is really gorgeous and really adds to the graphical punch.

NPCs are rendered in a window when you talk with them. They look kind of cartoon-like. I normally enjoy my post-apocalyptic worlds to be a bit less colorful and humorous, but again, Krater has its own flavor. It’s internally consistent, and does not really look like anything else.

The sound is passable, but is also the weakest component of Krater. Voice acting is restricted to clips when you meet NPCs, so they might be crying or laughing or making little comments, but you still have to read a lot of text to figure out what your mission is. If they talk a long time, you might hear the same clip over and over, asking you why the world is so bad or whatever. I also had trouble with the overview music cutting in and out, like it was playing from a jagged record sometimes. I think this was a performance issue even though I was playing on a good machine. It was probably trying to render high-definition audio when low-quality sounds would have worked. I did not notice any ambient noises over the music. It’s not a bad thing, but just seems to be a little bit less than the quality in the rest of the game.

Overall, Krater is a lot of fun to play. It almost looks like more of a straight adventure game than one set in an apocalyptic future. Things are just a bit too colorful, a bit to pretty, to be the aftermath of a nuclear war. But the world looks great, so that can be forgiven. I guess the Swedes are more jovial than other developers. In any case Krater will really appeal to action gamers who like lots of combat, lots of smashing and a few laughs. You have to be on your game the whole time you play, and it’s been a while since a game could get my heart rate up a bit. And for just $14 on Steam, it also makes for a ridiculously good value.

Krater earns 4 GiN Gems and gets its own place in the lineup of great post-nuclear war RPGs.