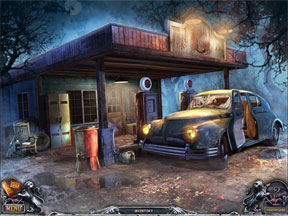 When it comes to puzzle games, I’ve played the good, the bad and the really ugly. For a span of about two years I always looked at puzzle games with a cynical attitude. But recently I’ve been fortunate enough to play some pretty good ones like the Jewel Link Chronicles. And then I got to this one, which I consider one of the absolute best the genre has to offer.

I was looking forward to House of 1000 Doors 2: The Palm of Zoroaster after reading our review of the original game, House of 1000 Doors 2: Family Secrets. These puzzle adventure game tend to skew one of two ways. They are either mostly adventure type titles where you walk around and try to solve a mystery or something like that. The emphasis is on exploration and sometimes talking with other characters. Puzzles are mostly secondary, of the type that finds you feeding a steak to a dog to get him away from a door.

Then there are the more pure puzzlers, of which the whole House of 1000 Doors series falls into. These put puzzle solving front and center in the form of hidden object gathering and inventory manipulation.

After playing House of 1000 doors 2, I was more satisfied than I have been with any of the last few titles combined. I’ve rarely played a game where I’ve lost hours upon hours of sleep because of withdraws. Even my dreams turned into solving puzzles after this game. Those of you who appreciate a good puzzle and joy of solving it should not delay in picking this one up. It’s not very expensive and you get a whole lot for your money.

When I first loaded the game it had a little opening cutscene. The first thing I noticed was how smooth the graphics were and how perfect the sound effects were. Of course some games are known for having a brilliant opening movie and further degrading. This never occurred, at any point, throughout the game.

As I mentioned before, The House of 1000 Doors 2: The Palm of Zoroaster is a sequel to a game I never played. Under normal circumstances I’d be more lost than Attila the Hun at a peace rally. Lucky for me the background was explained not only effectively, but without having to take too much precious time to do so.

I’d still recommend getting both titles if you are thinking of picking this one up, but only because I assume the first is also a high quality title.

The House of 1000 Doors is a house where souls gather. Recently though, a mysterious gem appeared and started wrecking havoc on the place. The gem is called the Palm of Zoroaster, and is cursed. You get travel into the past, to places where the gem has been before, as you attempt to track it down from its hiding place. From the Far East to the snowy north to deep jungles you will trek in your search for the cursed gem. And all of the locations are absolutely beautiful, hand drawn masterpieces that are as fun to look at as they are to play with. A few of them are a touch creepy too, and it’s this spookiness that probably earns it the T for Teen rating from the ESRB. I would say that most young people can probably handle the game, though the youngest among us might get a little bit too scared. Still, its nearly fun for all ages.

One really cool thing I loved was that the hint button was always there to help you. Some puzzle games have a hint button, and I was glad this one did as well. House of 1000 Doors 2 goes beyond that with a built-in strategy guide too. That feature really impressed me. Instead of just solving a puzzle you are stuck on, the game will feed you little bits of data to help out, eventually solving the puzzle for you if you are really stuck, but letting you have that ah-ha moment unless you are absolutely out of your element on a challenge.

Everything about this game is nearly flawless. The musical score should be in the top five nominations for high quality game music this year and the ambient sound and sound effects really add to the atmosphere. The only issue I had was some of the voice work, which seemed a touch forced in places.

This is by far one of the best PC games I’ve played in a long time. Anyone who loves puzzle games should for sure treat themselves and pick up House of 1000 Doors 2: The Palm of Zoroaster, which earns every bit of its 4.5 GiN Gems.

Heck, for just $14.99, go ahead and grab the first game in the series as well. I know I plan to. Viva Media once again proves itself to be a publisher of quality games.