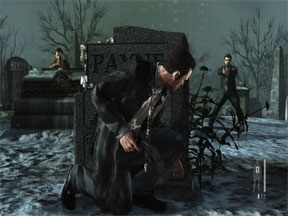 With almost a decade since his last spotting in Max Payne 2, I was beginning to think that the hardboiled ex-cop everyone knows and loves was dead. But he’s back now, a little older, but not much wiser. Rest assured, he’s still the Charlie Sheen of video game heroes, boozing and popping pills, and brilliantly flailing through life in a drug-induced haze. Add in lots of guns, and you pretty much have Max’s world down pat.

The newest game finds Max recruited to South America, to provide security for a wealthy family with shady roots. It’s a whole lot prettier than his old haunt in New Jersey, but just as deadly as you will soon find out. We do get to revisit the old neighborhood in a series of snowy flashbacks, which is nice, but the bulk of the adventure will take place in and around sunny Brazil.

I was pretty impressed with the whole package. All the great elements of the first two Max Payne games are here, just enhanced and made a lot better. The biggest improvement of course is the graphics. Running on a PC with the highest settings, you would be hard pressed to not think of it as near-life quality. Even with medium quality graphics settings, it’s as good-looking as any game out there today. Of course that means that when Max visits the favelas (slums or shanty towns) of Sao Paulo with their seedy bars and underage brothels, you get the full, revolting effect. But he gets to see some nice places too, penthouse apartments and a gorgeous yacht among them, although those locations are no less deadly, and seen all too briefly. Grit and grime and splashes of blood are going to be your constant companion in this rather long-playing adventure.

Elements of the original Max Payne story also make their way to Brazil, so it’s nice to see that homage to the past. One entire chapter is played as a flashback to help players understand how our anti-hero made his way south of the border.

Max himself is still a boozer. It made me cringe each time he got drunk to the point that the screen seemed a little fuzzy around the edges and he started to get double vision, especially when he was supposed to be running security and keeping sharp. Of course this gets him into terrible trouble, and Max knows it. He often comments that he would be better off not seeing the world from the bottom of a bottle. But then in the very next scene, he’s back to his old tricks again, getting drunk and screwing up his assignment. Same old Max.

Gameplay is pretty much like it was before, with a shooter element that relies heavily on both cover and bullet time. Cover is pretty self-explanatory. Get behind something or you won’t make it. Bullet time, which started with the original Max Payne, is the ability to slow down time to get a better shot. You see it now in movies somewhat often, popularized by the Matrix, and you can use it Max Payne 3 to get out of a sticky situation. In fact, the game might just be impossible without it.

Bullet time is a resource that builds up in a little bar beside your health gauge. When you kill people or get shot at, the bar fills a little bit. When you activate bullet time, it drains it. Playing on an easier level gives you more bullet time and has it drain more slowly, and given the difficulty of some of the levels, I would not blame anyone for choosing the easiest setting.

Once bullet time is activated, you can easily (or more easily) zoom in on bad guys and get some nice headshots to take them out quickly. I found this pretty easy to do with the mouse and keyboard, though I can imagine it might be harder for those playing on a console. With a mouse, it’s almost point and click. You can also activate bullet time by jumping forward or rolling to one side if you want Max to fly slowly through a room and take out bad guys in a very movie-like style. However, this is a bit harder to do because both Max and the bad guys are moving, if slowly.

I have three problems with the gameplay, which I will describe in decreasing order of severity. First, Max Payne 3 is very hard to play, even on the casual (the easiest) setting. The game likes to throw Max into situations where he is standing alone in a room with many bad guys. This most often happens after a cut scene, so you have little choice as to your position. You are going to die a lot when this happens. There are almost too many bad guys, and they are often given good cover spots where you are not given any, or ones that only give terrible angles to shoot from. Because of this, a few places in the game become more of a grind than a fun time. One spot where you have to fight a bunch of thugs from the deck of a yacht killed me over 20 times in the same spot despite trying a bunch of different strategies. I suppose when you finally get through it you can jump for joy, but it was way more frustrating than it should have been, and there are many moments like that.

Secondly, the interface for weapons is kind of bad. Max can carry two pistols and one long rifle. You scroll your mouse wheel to change the weapons, but the first choice that comes up when you start to scroll is to drop your rifle. You actually have to spin around the wheel a full turn to move past the drop option and come around to the equip option. So Max will often drop his best weapon as combat begins if you are not careful. This is compounded by the fact that even if Max is holding a powerful weapon like a FAL machinegun or a shotgun when he enters a cut scene, when he comes out of it, he will be holding his pistol instead. So you are running through a compound with your shotgun doing okay, and you come to a door, a short cut scene plays and you are dropped into one of those aforementioned near-impossible situations holding your anemic pistol and have to fumble with the interface to bring your rifle back up while being shot at.

Finally, Max Payne 3 seems to be a little schizophrenic in terms of its gameplay. One important element in the game is exploring every nook and cranny of a level. You need to find golden gun parts which can improve your weapons, plus clues as to the plot of the game, and every pill bottle you can lay your hands on because that is how Max heals up. But while you are doing this, Max is yelling at you saying that ‘time is short, I have to move on.’ The fact is that time is almost never short. You can stand around in a bathroom for half an hour if you want and whoever you are chasing won’t get away. The game prods you to move ahead recklessly, yet rewards you for careful and slow exploration of the environment.

On the other hand, there are many really cool elements that have been added to the gameplay like destructible environments that tend to balance these annoyances. You can use cars as weapons if you shoot them enough so that they blow up. Or you can cause heavy objects to drop onto unsuspecting victims. Stuff like that is a nice touch if you can find where to shoot. Also, I thought it was funny that you can make Max play the piano every time he finds one. As the story progresses, he gets better and better until he can actually play his theme song with confidence. So even in the middle of a gunfight, take time to play any piano you find.

The voice acting is amazing. Max is voiced this time by James McCaffrey, and he does a great job with the great script. Max is cynical as hell, making sarcastic observations about the world that are as funny as they are true. In fact, he’s more noire than all of LA Noire put together. The great thing is that Max knows he’s washed up. He’s always saying things like ‘I’m not slipping. I’m slipped. I’m a bad joke.’ Yet, he’s able to kill just about anyone who comes after him. One wonders how much more of a badass he would be if he were not constantly drunk and hopped up on pills all the time. In any case, he really makes the game more enjoyable, just wondering what he will say next.

The single player part of the game is quite long. You get your money’s worth, especially in this era when shooters don’t even offer five good hours of gameplay. Max Payne 3 more than doubles that, though much of the fighting for me was reloading my deaths.

If you finish with the single player game, or really like playing with others, you can play the multiplayer part of the title, which is also top quality. Players can form crews that always fight together and rise up the infamous ranks online until they become one of the most feared gangs out there. The maps are varied and cool. And Rockstar seems to be supporting the title heavily with the release of several DLCs, always a good sign that the community is important and should continue to thrive.

Taken as a whole, Max Payne 3 is a great game with only a few flaws. The combat will get your blood pumping, the character of Max is as memorable as ever, and the multiplayer community is thriving and well-supported. I just hope we don’t have to wait ten years to see Max Payne 4.