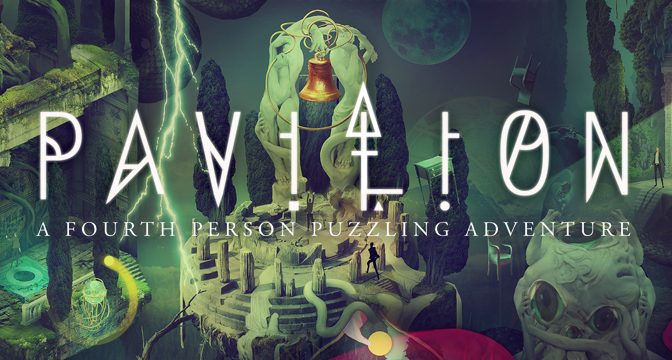 Pavilion is described by developer, Visiontrick Media, as a fourth-person puzzler. It shares similarities with Monument Valley, in that you don’t control the character, but rather influence the stunning environment. Visually it is distinct from Monument Valley and it also doesn’t share the Escher-style perspective and geometry puzzles. However, it is a beautiful little head-scratcher with a soothing mystery all of its own.

This is one gorgeous game. The 2D backgrounds have echoes of Salvador Dali, with neo-classical statues writhing above crumbling doorways festooned with creepers. You must direct a little man by manipulating the environment. You can switch lights on and off to open and cut off paths. There are also bells to be rung, which move the man in that direction or sometimes open doors.

As the levels go on, the puzzles in Pavilion become more and more complicated, but each one is stunning. There are decaying gardens, with ponds and fountains and statues with little steps and arches to guide the man through. Sometimes there are interiors complete with strange copper structures. When you ring a bell, a current of electricity travels along to light up mysterious symbols or open doorways.

The whole thing acts like a sort of doll’s house. As the man goes through a door, the walls become transparent, so the player can see him inside to help move him through the surreal world.

The puzzles range from simple blocks and ladders, to a more complex combination of railways in a flooded garden, combined with gateways and switches or timed events. Some puzzles require a key to be found, by completing mini games. The variety of puzzles keeps things interesting, whilst the beautiful setting and the mysterious story meant I wanted to get to the end.

I did come across a couple of bugs, but no game breakers and a quick response from the developers got me back on track. Also, the controls can be annoying at times, if you’re using the keyboard to try and direct the golden ball that interacts with objects.

There is a sense of the man being trapped within a dream, as some puzzles are in a modern city apartment. A ghostly woman dances in another room and the furniture is floating. Your mission is to guide the man through this strange world, perhaps to reunite with the ghost – who knows.

In addition to the dreamy graphics and clever puzzles, Pavilion’s ambient soundtrack of haunting bamboo flutes adds to the atmospheric feel, as do weather effects.

With over 20 levels, Paviliion is longer than usual for an indie puzzler. Apparently, this is Chapter One and a second chapter is due. It’s unclear whether the next section will cost extra. As it stands, Pavilion is not that challenging, but the puzzles are varied and interesting. Whilst any hardcore puzzle fans should be able to complete it in around two hours, I found the difficulty pitched just right for me.

This is a game you can dip in and out of, when you want a quiet moment in a strange world.  Anyone who enjoyed Monument Valley should give Pavilion a go.