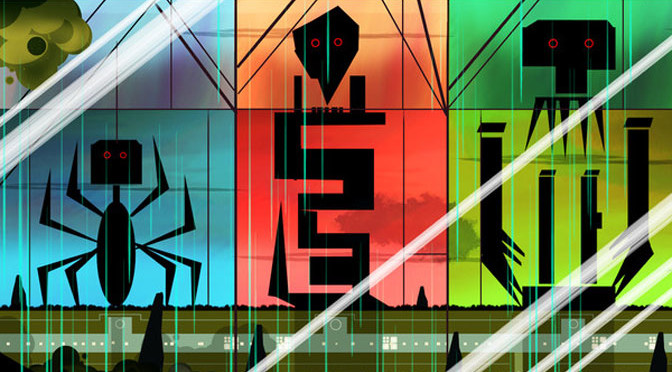 Animal Gods is a very interesting type of game. It attempts to be cerebral and thought-provoking, telling an age-old story through the eyes of a girl named Thistle as she explores the ruins of a civilization that aspired for too much and, ultimately, collapsed due to its own weight. The predominant themes and gameplay of Animal Gods are very like unto its reality… A beautiful game that buckles under its own premise. Is Animal Gods a must play experience then, due to the story, or is it something best left to a Steam sale? Let’s find out.

One thing prospective buyers of Animal Gods will notice is that the game is absolutely beautiful: The abstract visuals of both the environments and the characters depicted therein are a treat to the eyes. Colorful, looping clusters of green to represent trees, there are flickering square lights to represent lens flare; everything looks great. There’s an accompanying soundtrack of synthetic, soft tunes that work well when combined with the aesthetic. None of the music is exactly memorable, but it is quite relaxing, so gamers who enjoy a more laid back music track might enjoy the overall ambiance greatly.

With that out of the way, we can get into the meat of the review: The gameplay. Of which, there isn’t much to really say, either. Animal Gods plays in a third person view, similar to the old Zelda games, but the actual manner in which you play the game is a far cry from the first Zelda’s achievements. There are four dungeons in the game and players can tackle the first three in any particular order. Each dungeon has only one gameplay mechanic and leaving a dungeon means you also leave behind the ability granted to you in the dungeon.

For example, the dungeon of the Snake God gives you a sword that you use to destroy some box-shaped enemies that move in predetermined paths. There are only one or two enemy types per dungeon, and that’s if we classify the, “Small, moving square enemies” separate from the, “Large, immobile square enemies” in the aforementioned dungeon. Touching any enemy or hazard kills you in one hit, and puzzles mostly consist of, “Reach a specific spot without dying” or, “Kill enough enemies to continue.” That’s about as varied as the objectives become over the course of the game. Though, I wouldn’t consider a temporary progress block like defeating enemies to progress to count as a puzzle, otherwise Bayonetta 2 was one of the best puzzlers of last year.

The Spider God dungeon gives players access to a bow while inside it, while the Lion God dungeon gives players a teleport ability that moves Thistle forward a fixed distance. The Lion God dungeon didn’t even have any enemies (since you couldn’t kill them, due to the fact that you can’t use the sword and bow outside of their respective dungeons), but does have streams of poison that you need to teleport through with a fair amount of precision. Since there is no indicator or marker of how far you move with the teleport, players will be required to use trial and error until you’re able to eyeball the distance and make your way through the dungeon without hitting the plentiful poisoned obstacles and dying.

The fourth and final dungeon, as you may have suspected, gives players access to all three of the abilities as you march your way through to a specified point and then the game suddenly ends at around two hours. You read that correctly: Animal Gods lasts about two hours, or about the length of your average dental examination (and about as entertaining, too). It could most likely be completed even faster as that two hour timeframe was due to wandering back and forth through the environment, reading the various log and diary entries, visiting the graveyard, etc..

What is most disappointing is that the final dungeon is the most entertaining part of the game, as you get to use the different abilities in tandem, but is a very fleeting experience before the end credits roll. Discarding the concept of nonlinear progression that the developer decided to implement by forcing players to go through the dungeons in a set order would have maximized the variety of actions the player does per dungeon and made Animal Gods a much more engaging experience, especially if the last dungeon was any indicator (since you wouldn’t be swinging the same sword at 20 different enemies 40-50 times in the Snake dungeon with literally nothing else to do).

The story in Animal Gods is genuinely interesting, though nothing can really be told without spoiling it. In a strange, unrelated-to-the-plot twist, the actual game part of Animal Gods is what weighs it down. While having one unique mechanic per dungeon is an interesting approach, tackling one (or two, depending on how you count them) mindless enemy after another isn’t exactly riveting. A large amount of the game is slowly meandering through environments that are significantly larger than the player character, Thistle, in size and scope. Which, again, while the environments look great, them being largely empty gives the player no sense of reward or satisfaction since there is nothing to find except various journal entries (so those who don’t care, or think that the story concept is stupid, will find even less reason to play).

While some players may enjoy this kind of thing while they relax, those wanting a more engaging experience might be extremely disappointed after being pulled in by the descriptions of it being, “Zelda-like.” Since there’s a dearth of puzzles or enemy variety, the only real comparison between Animal Gods and older 2D Zelda titles mostly lies in the use of an isometric viewing angle (if you cannot tell, I find the comparison between the two to be extremely disingenuous as Animal Gods is an incredibly simple game, lacking the experienced complexity or clever nuances of any entry in the Zelda series. Yes, including Wand of Gamelon).

Animal Gods is a very pretty game without a whole lot else going for it. The simple gameplay mechanics are underutilized until the final dungeon and there are no bosses, unless you count the weird endurance course… thing that was the Lion God. Overall, it wraps up to a very uneventful experience, and while I spoke with admonition of the short run time, even two hours with the game felt like it had overstayed its welcome.

Animal Gods is a game that can be recommended only to those who truly enjoy the experiences of games that have a little something different going for them. However, this game would only be recommended if on sale for a steep discount or if the prospective purchaser is looking for a short game with an interesting story and can forgive repetitive gameplay mechanics.