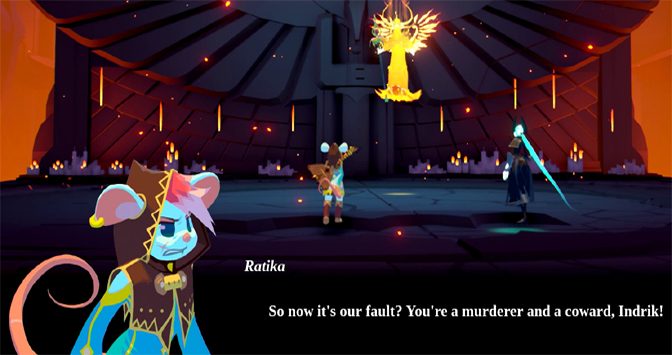 You have one day to save the world. That’s the premise of Omensight in one sentence, but there’s a catch: you can live that day over and over until you do. Boasting fast, fluid combat, an engrossing story and beautiful visuals, Omensight is a game that latches on and doesn’t want to let go.

From moment one, Omensight’s storytelling sinks its teeth in with strong voice acting and solid visuals. The tribes of Urralia — all of which are anthropomorphic animals — are at war with one another, and a final battle is about to take place. As it reaches its climax, a foxlike creature made of pure light appears, a character all parties involved instantly recognize as “the Harbinger.” 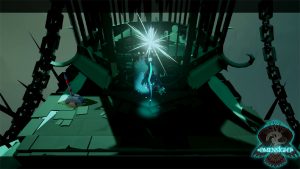 Omensight thrusts players into the powerful character’s role in a tutorial that doubles as the game’s prelude, offering a glimpse at the fluent combat and stylish graphics it has on display. As the tutorial ends, players find out that Voden, a being of darkness about to destroy the world, has awoken, and the Godless-Priestess who kept it at bay has been murdered. 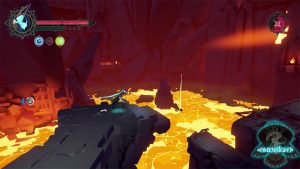 But as the Harbinger, players can connect with slain characters’ souls and relive the world’s final day repeatedly, slowly unlocking clues and altering the past to prevent the world’s end. As you ally yourself with each character, Omensight shows you the game from new perspectives, often requiring you to play through the same story multiple times while making different decisions to unlock new abilities and clues.

Although repetitive and somewhat linear in its level design, the gradual reveal of information is enough to alter each run in a way that doesn’t become stale. And the developers were wise to include an option to skip to the crucial part of a level after you’ve played it once.

There were times that I didn’t want to skip ahead, though, and that’s thanks to Omensight’s excellent combat system. Mixing light and heavy attacks with well-timed dodges kept me scanning the screen, my finger on the dodge button ready to twitch at a moment’s notice. And although I was able to button-mash my way through some early encounters, later stages punished me for it, especially the boss fights. 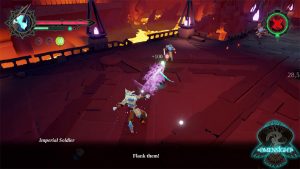 Fighting remains fresh through the game’s leveling system, which unlocks new abilities in a predetermined order. Collecting amber, the in-game currency, allows players to further enhance those abilities however you see fit.

As the story progresses, you access the game’s namesake ability, Omensight. Omensights are visions of the past that the Harbinger can pass on to other characters, creating an alternative path to a particular story. What’s more, players can also pass along the vision before a boss fight, which is generally another of the main characters, altering the story further. 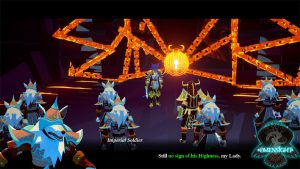 When to use an Omensight creates multiple branching paths that require two or three playthroughs of each level, but the reward of seeing the story unveiled kept me coming back again and again. What’s more, the game also takes place in a shared universe with Stories: The Path of Destinies, creating a larger mythos to explore.

Visually striking and bursting with vibrant color, Omensight’s art style brings the story to life in an engrossing way. Although the idea of anthropomorphic animals engaged in an apocalyptic conflict might seem contrived, the fairytale-like atmosphere and graphics immersed me so thoroughly I wasn’t even thinking about it. (Alright, there was a moment when a sword-and-shield-wielding raccoon jarred me, but it didn’t happen often.) 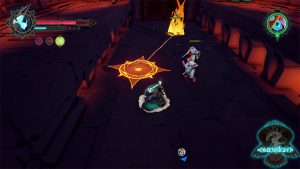 Excellent voice acting completes the storytelling package, and hearing the main characters juxtaposed with the silent protagonist kept me on my toes for any context clues to the murder I might be missing. Above all else, the performances put a genuine smile on my face from the sheer charm of it all.

Aside from the occasional hiccup in frame rate on my original PS4 and a sometimes-uncooperative camera angle, Omensight looks and plays as good as any action game available. 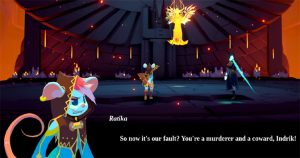 If you’re looking for frenetic combat with a great story, Omensight is worth checking out. It earns 4 GiN Gems out of 5.