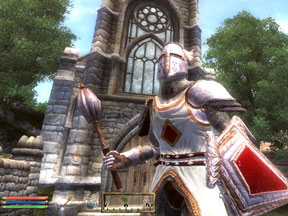 Knights of The Nine

Just when you thought it was safe to head back to your house in the Imperial City, kick back with a cold mead and enjoy being the hero of the world, trouble come knocking. The expansion pack Knights of the Nine has been released for the RPG Oblivion, bringing even more content to a game that features ridiculous amounts of it to begin with.

Actually it seems like I have been writing a lot about expansion packs lately. There was the Forces of Corruption one for Empire at War and the War Chiefs one for Age of Empires III before that. But this is the first time in recent memory that an RPG has expanded. But Bethesda is quite smart about these things, considering Morrowind expanded with the above average Tribunal expansion and the excellent Bloodmoon, plus the countless player-created mods and dungeons.

Knights of the Nine finds the land of Tamriel once again threatened by an all-powerful evil. Like the main game, Knights takes place in the capital province of Cyrodiil. It does not matter whether or not you have solved the main quest of the main game or not. You can still play Knights so long as you own the main game.

The link on the right will take you to where you can buy the game for the PC through Amazon. If you own an Xbox 360 you can download the pack. You can also download the expansion for the PC, but you won’t get all the good extra content that way. The retail box not only has the expansion pack for Knights of the Nine, but also all the other content packs released over the past year including Horse Armor, The Orrery, Wizard’s Tower, Vile Lair, Thieves Den, Mehrunes’ Razor, and Spell Tomes. So it’s in your best interest given the low price to buy the retail version of the game and get all that extra content as well.

For this review we are just going to be looking at the Knights of the Nine content.

The quest starts out because you start to hear rumors of an attack on a church out in seaside Anvil. Going there, you find a grisly scene inside the church halls. All the people who worked there have been murdered. One woman’s body was even put into the altar bowl in a sign of apparent blasphemy. For Oblivion, this is pretty gruesome stuff and I felt a bit like a CSI agent.

Outside the temple you find an old profit doing his street preacher thing. He seems to know a lot about what is going on, and claims that an ancient evil is waking up and will soon begin slaughtering people at temples across the realm. He is looking for a holy knight that will quest to find various relics across the realm, to put together a full suit of armor that can be used to fight this new evil.

Being the hero type, and of course wanting a bunch of new stuff with magical powers to wear, you would be a fool not to take him up on his offer.

The quest itself starts off very slow, with a lot of "find this spot and pray here" types of things. In fact, at first I was a bit bored with the whole thing.

But fear not, because things liven up very quickly. Eventually you will track down an abandoned priory where the old Knights of the Nine used to live. I don’t want to give away any spoilers, but in addition to finding the old relics, you will begin building up the old order to its former glory. For me, this was a lot more fun than actually questing for the relics and I really enjoyed having each person with their different personalities join me.

It takes about six hours of gameplay to collect all the different relics. Some of them are in rather ingenious dungeons protected by traps the likes of which I had not seen before in Oblivion. You can tell that a lot of care went into construction of these new dungeons and it is a ton of fun to go through them all.

A word of caution though: you need to be fairly high level to get through the expansion pack. You don’t have to have completed the game, but some of the creatures and even the traps involved require both a high level character and also some familiarity with how the game world works to be successful. I went through with a level 30 character and think that perhaps I was a little too high on the scale. I know the game probably scales to your level somewhat, but I had little trouble getting through the combat portions of the quest, though the puzzles stumped me a little which was nice.

Eventually you will of course confront the big guy that is causing all the trouble in the world. If you are good, you can win the game and all your named knights will be alive (though you will probably have to do a little save and load cheating till you figure out how). If some of your knights die, they will be replaced with no-name characters so your priory will always be full. Still, if you can, it’s better to try and keep everyone alive. I did it, so it can be done.

Once you have solved the quests then it’s like adding a new title to your character. At times people will call you Lord Crusader when they see you and generally people seem to like you a bit more, especially religious types who were at the most danger of this new threat.

The suit of armor itself is pretty good, though not really tailored to my character. I ended up putting the entire thing on display when I was finished, though I can see a lot of people wanting to wear it.

As expansion packs go, I was both impressed and slightly disappointed with this one. I kind of expected something on the order of Bloodmoon, which offered what amounted to an entirely new game for Morrowind. Knights is nice, but getting finished in just six hours left me wanting more. If you have a PC, do yourself a favor and buy the full retail game box so at least you will have a bunch of extra content to play with as well as the Knights quest. Either way, Knights will inject some real life into Oblivion for you, especially if you have started to wander off and play other titles.