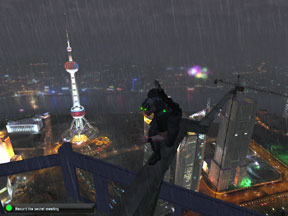 I have never played a Splinter Cell game before, but I have played titles with similar gameplay options where you have to hide in shadows and generally be pretty sneaky. The Hitman series and even the Thief series comes to mind.

So I did not know what to expect really when I loaded it up on my gaming PC. One of the things I did not expect was that the game could not run. Apparently my graphics card was not up to snuff, because it only supported Shader Model 2, and to run this monster you need one that can do Shader Model 3. That means an expensive upgrade. I upgraded to an ATI Radeon X1950 which cost me $299. So I was a bit unhappy with the game right off the bat.

Thankfully, the upgrade was justified. Apparently the game is so high end, that trying to show it with an older pixel shader just would just not do it justice. When I finally got the game running, I was simply amazed with how things looked. I have probably played thousands of games over the years and nothing comes close to the level of detail here.

Oddly enough, the detail actually increases when you get closer to objects, and especially people. When you zoom in on Sam Fisher, the main character, you actually see various reactions dance across his face, just like a real person. His eyes move. He looks at different things in the room, reacting naturally when people enter and leave and generally looks like you had a camera on a real person. Not every character you meet is quite that detailed, but all of them look really good.

The game looks so amazing that my jaw was dropping nearly every time I entered a new level. On one level there is this terrible blizzard and it looks so darn real that I started to feel cold. The swirling snow actually gets denser randomly and sometimes is nearly clear, which plays havoc with your sighting distances. One moment you can see a guard clearly patrolling in the distance and the next instant he is lost in the storm. The same goes for the guard’s ability to see you as well. You can use a particularly violent wind gust full of snow to walk right up to an unsuspecting enemy. Assuming the storm holds, you can knock them out without even nearby guards noticing.

Other levels take place at night, like one where you have to swim into the intake pipe of a geothermal power plant. Here you can use the darkness for natural cover, though you have to be careful to avoid spotlights and even the light that pushes out across the ground when a door opens.

All the levels look great, even when tooling around the dingy headquarters of the terrorist cell you are infiltrating. But one is absolutely ridiculous in graphical detail. You are supposed to record a secret meeting between a Pakistani nuclear scientist and a terrorist group. The problem is that the only way to use the laser microphone is to get really close to the outside of the building. And the building just happens to be one of the tallest in the world in downtown Shanghai.

So over the side of the building you go with a nylon rope to support you. You will be completely amazed at the scenery as you look out into the nighttime city all around. Cars move around way down there and boats zip around the river. Your reflection looks back at you on the smooth glass walls as well as the reflection of other tall buildings around you, complete with advertisements and various other neon glows.

Did I mention that it was raining? Dark clouds move quickly overhead and silhouette in the light of the moon, as well as the circling helicopters the terrorists have hired to keep you away. And the rain pours down, looking, well, like rain.

Oh, did I also mention that it was the Chinese New Year? Yep, the city is lit up by many different fireworks displays, including one being launched from boats about 80 stories down there in the water. Some of the bigger rockets even reach your position, blowing up in colorful flowers and changing the color of your skin briefly. The sudden light makes you vulnerable to being spotted by folks inside, so you need to be careful.

Anyway, games have never looked this good, and sheer quality helped to make me feel a bit better about the cash I had to outlay to get the new graphics card.

The plot of this Splinter Cell is that good guy Sam Fisher gets to go undercover as a bad guy, getting in good with a terrorist group and trying to uncover their activities. This requires that you spend a fun six months in prison, and participate in a big bust out plot that is quite ingenious.

Obviously in prison you don’t have all your gadgets and weapons, but surprisingly, the terrorists do have access to all the tools you are used to, so expect a lot of high tech weaponry and gadgets. You will even have some tough moral choices to make, as the terrorists are going to insist that you do some bad things to gain their trust.

The gadgets are some of the most fun of the game. Besides hacking computers and listening in to private conversations, you will be firing fiber optic cameras out of the barrel of your gun, looking under doors before you breech them with special vision enhancements and using winches to move vertically up or down into impossible spaces. And of course you have all your special vision modes that are the trademark of the Splinter Cell series.

Combat is pretty well done. You can choose to hit people with lethal moves, which normally involves sticking your knife into their heart, or you can use knockout moves, which incapacitates them for the rest of that level, unless someone finds their body and revives them. Like Hitman and Thief, it’s important to hide the bodies, living or dead, that you attack so that others don’t become alarmed that you are inside their fortified complex. My biggest problem is that I often got excited and killed someone instead of using a non-lethal move, or the person would not cooperate and would fall into icy water or over a ledge before I could grab their unconscious form.

To keep you safe, you have a little indicator that goes from green to yellow to red. If it is green, it means you are well hidden. Yellow means someone might see you or might not. And red means you are wide open. Basically, you have to stick to the shadows or the darkness to remain hidden. In my opinion, no Splinter Cell agent should go outside before dark. Daylight missions and indoor ones are a lot harder, for obvious reasons.

I had a lot of fun with Double Agent. The gadgets are as good as any James Bond gets his hands on, and the levels and enemy AI is well thought out. People react pretty much like you think they should. I did run into a couple odd bugs in the game. These did not cause a crash, but would kind of hang you up, sometimes literally, when moving from one place to another. Normally these did require a quick load from one of your quick save files, though it did not happen too much.

And just to reiterate, Double Agent was reviewed on a high-end PC with the aforementioned graphics card. I don’t really see how the PS2 would recreate the amazing scenery that PC players enjoy, though high-end consoles like the Xbox 360 probably could. And the smooth gameplay and interesting plot would be the same.

If you want an amazing graphical feast and have a rig that can run it, you can’t do much better for the sneak and peek genre than Double Agent.