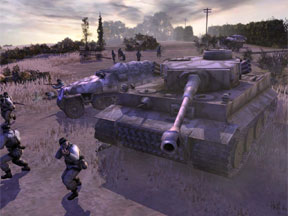 Looking at the Company of Heroes box, it’s difficult to tell what to expect. So many RTS games have come out lately that it’s nearly impossible to find anything different. Most RTS games are not really bad, but few really break the mold (or break off the mold) of the standard resource-gathering-followed-by-a-rush-gameplay that has become standard.

Company of Heroes however does everything right, starting with the graphics and moving through the gameplay and ending with the artificial intelligence. It truly is different, and better, than most other RTS titles out there on the market today.

We want to look at each of the aforementioned areas, but first let’s give a little background. Company of Heroes is set during World War II and follows the American fighting force known as Able Company as they assault the Normandy beaches and continue to push into Germany, with the best the Germans have to offer standing in their way at every turn.

The game is mission based. You are given an overall objective like taking a hill or destroying a V2 rocket launching pad. The Americans start off with no experience, but can get promoted and more accurate as they kill Germans.

In terms of specifics, we wanted to start with a description of the graphics, since that is probably what you will see first. They are amazing. There are few games of any genre that can compete here. Normally RTS games have good graphics, but for something really good you have to go to shooters or RPGs. Not here. Everything is beautifully rendered.

Each man has a uniform that is historically accurate depending on which side they are on. Some carry backpacks and some have slightly different helmets. All of them have a lot of miniature behavioral actions that they will do from time to time like wiping the sweat off their brow. Thankfully, the game lets you zoom in very close to see these details if you want.

Vehicles look even better, and are of course historically accurate. I was extremely impressed when I paused the game to zoom in and get a better look at an M8 armored car. I could not only see mud on its tires but also scratches on its paint in places. And it was covered in both decals and its army vehicle number. Here is the kicker. The M8 has an open turret but from the default view you never really see inside it. If you rotate the camera just right however, you can see in there. And the vehicle number is painted inside the turret too. I have to wonder why the developers would bother to put that much detail into the game, but it’s just another indication of a level of quality that heroes displays.

And the icing on the graphical cake is that everything on the map can be destroyed. Are German infantry sniping you from a little chÃƒÂ¢teau? No problem. Send in your M4 Crocodile Sherman flame tank and set it on fire. It will eventually turn into a blaze and collapse whether or not the infantry inside are able to get out. Or just have your paratroopers toss a satchel charge into one of the windows and then stand back. Boards will go sky high, along with anyone caught in a window when the place goes up.

Everything from trees to vehicle wreckage can be destroyed. And if you are looking for some spectacular explosions, try knocking out an enemy tank.

The gameplay is also a refreshing twist over what we normally see in an RTS. Your forces are given a little bit of three resources every minute. The resources are manpower, ammunition and fuel. You spend those resources to buy units or build structures. You can get more resources per minute if you capture strategic points on the map, which involves knocking out any outposts your opponent has put there, and then having an infantry squad slowly lower the enemy flag and put your own up. This capture the flag type of gameplay is popular in shooters like the Battlefield series, but this is the first time I have seen it really successfully done in a real-time strategy title.

One thing about gathering resources every minute (and really every second) is that it can get out of hand. You can have thousands of resource points by the end of the game on long engagements. This is balanced by the fact that there is a unit cap. You only have 75 points to spend on troops no matter how much fuel and ammo you have stockpiled. An infantry squad might cost you three points, whereas a powerful specialty unit like a sniper or a big tank might cost you eight. So you have to carefully plan how to spend your 75 points, and this also keeps the game from getting out of hand with too many units for the human player to control.

Couple this with a very intelligent AI, and you have one heck of a great game and a challenging battle ahead, especially if you have to defend and area.

Depending on how you play, you might end up with plenty of time to put up defenses. On some missions you might even be charged with defending an area for a certain amount of time like 30 or even 50 minutes. I like to turtle so this was great for me, setting up interlocking fields of fire from machine gun nests, tank traps, hidden mortars and field hospitals to deal with the wounded as well as engineers to rush in fix broken equipment.

But despite creating a fortress, you can’t get complacent because the enemy is good. I have had them sneak tanks down alleys to get into my inner parameter, blow up walls to pave the way for infantry assaults and call in artillery to soften up my outer rings before pushing towards the center. They really will probe you to find your weakness and are not in favor of throwing waves of men into machine gun nests, though they will if they think they can break through.