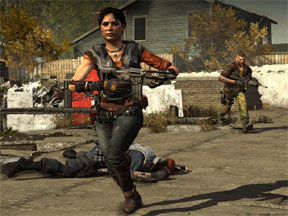 For all the hype surrounding Homefront, the shooter itself turned out to almost be a completely average experience with a laughably short single player campaign, clunky AI mechanics and a storyline that players will either love or hate, with little compromise in between.

I guess given all the marketing that THQ put into this title, including littering the San Francisco bay with red balloons to protest fake North Korean aggression, had me thinking I was in for something special. You know, the kind of special most of us felt when we played the first level of Call of Duty: Modern Warfare. Instead, Homefront starts off pretty good in terms of storyline, but then quickly degrades into a typical follow-the-leader almost-on-rails-shooter style that was all the rage several years ago.

But let’s start with the plot. While mostly silly on the surface, it is nonetheless well-plotted out in the way that a fine novel is at the onset. North and South Korea have reunited. Over the years, their star rises while the US is in decline. A surprise attack has let the newly united Korea conquer the western half of the US. And that’s where you come in. As a down on his luck pilot named Jacobs, you are first forced into the Korean army, but then quickly rescued and spend the rest of the game with the resistance.

The opening level shows how terrible the Koreans are to occupied US citizens. As you ride along in a bus, you see people being beaten, families torn apart and parents being gunned down in the street in front of their crying little kids. I know the reaction it was supposed to put into me. I was supposed to get angry and want to kill all the Koreans. But for me this did not happen for three reasons. First, the attempt to elicit that emotion was so ham-fisted that it was almost ridiculous. Secondly, I kept thinking that I had seen it all before, back in Half-Life 2. Only instead of aliens beating the crap out of defenseless people, it was Koreans. And finally, I never really bought the plot. I was like, "okay I get it, Koreans bad," now let’s get on to the shooting.

By the way, the way Koreans are portrayed, as something akin to barbarous animals, is pretty darn offensive. Even the Russians in that horrible mini-series Amerika a few years ago had their good points. Here the Koreans might as well be aliens since they’ve had all their humanity stripped out of them so that they become totally two dimensional bad guys. I would just feel a bit dirty if I didn’t mention this, though I didn’t let it factor into the review scores.

You are quickly pulled off the bus after a forced crash by Connor and Rianna, (the latter being a rip-off of Alyx Vance from HL2) two characters whom you will be following a lot in missions. You then begin what is basically an almost on-the-rails shooter where you have to follow them through backyards and hedges as you escape the angry mob of Korean soldiers following you.

You know the drill, and if not, you will by the end of the game. The NPC you are following is invincible. A grenade can land at their feet and explode and they’ll be fine. But, they are completely ineffective in combat. So don’t count on them to do anything useful. If there are 15 enemy soldiers between you and that gate you need to reach, you will need to kill 15. Your partners only kill when it’s "scripted" for them to do so. Other than pointing out the way and stealing your cover, which for invincible warriors they do quite a lot, they are worthless. The biggest problem with the NPCs is that they are really 2D in terms of the plot. In a game dripping with story elements, you never really get to know the folks you are counting on to keep you alive, and that’s disappointing. In HL2 for example, romance with Alyx was at least hinted at, but here Rianna might as well be a dude.

The fights overall are not terrible, just nothing special, though there are a few worth writing home about. Sniping rednecks in the heartland is a perfect level. And the final fight is pretty darn cool. And there are a few mini-boss events, where you have to sneak up to a turret or an enemy stronghold that are fun. But everything else in-between those moments of glory could be ripped from a half-dozen lackluster shooters that have come out over the years. Modern Warfare 4 this is not.

There are a good variety of weapons, but you won’t be holding onto one for too long. There is not much ammo to go around, and many of the assault rifles don’t fit the same ammo as each other. So you will be using one for a while and then picking up something new, not so much because you want to try the new gun, but because it has a full 40 round clip and you’ve only got 3 rounds left in your current weapon. Other than different sights and fire rates, they all felt almost the same to me anyway.

The single player campaign lasts about five hours if you stop to smell the roses along the way. I spent quite a lot of time at a pretty cool resistance camp learning about how to feed goats for example. I guess that was the role-player in me desperately trying to find something to grab onto in Homefront’s bleak world.

Once you finish the single player campaign, there is a lot of multiplayer fun. In one mode, you have to earn points for your team so you can purchase better equipment and vehicles. You do this by killing the other team of course, but the biggest streaks are gained by completing objectives that pop up from time to time. The cool thing is that while everyone starts kind of weak, the battles ramp up fast so that at the tail end of the fight, it’s like a massive vehicle-based combat arena – fun if your side has done well and can afford the good stuff.

Homefront is not a bad game. In fact, I had a lot of fun with it. I can’t really name any flaws other than the companion AI and the linear nature of the levels, though that is more of a poor design choice than an actual flaw. If you are a single player only type of gamer, Homefront may not be for you, not at full price anyway. There just isn’t enough new stuff or a long enough campaign for you to get your money’s worth. If you side on the multiplayer part of the fence, Homefront may offer you something different than what you are used to, more along the lines of Quake Wars than simple, repetitive death matches most shooters offer.

Homefront is a good game that could have been great, but then again, isn’t that the way things go for shooters these days? I doubt this will be one we are talking about two or three years from now. But living for today, Homefront is a nice distraction and might be worth your money depending on how you like to play.

The average customer review rating on Amazon is about two and a half (out of five) stars for the game on all three platforms, and that is about right. Giving extra points for a rich plot, Homefront earns 3 out of 5 GiN Gems with us.