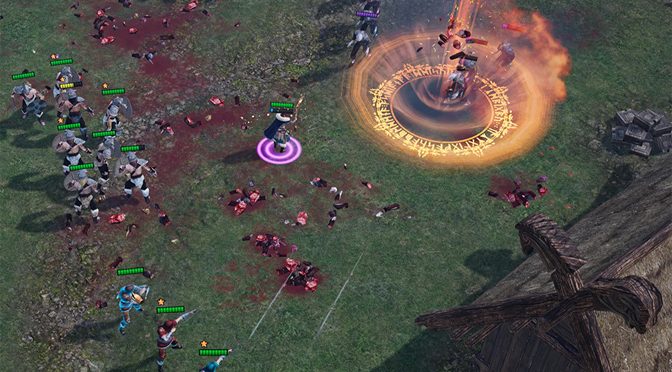 Long, long ago, in the halcyon days of yore, Bungie created Marathon. Not Marathon Petroleum, but a first person shooter in the mid-90s that introduced the much-beloved rocket jump mechanic. After making Marathon and its two sequels, however, Bungie wanted to try its hand at other genres of games and thus created Myth: The Fallen Lords. Myth was a real-time tactics game, distinct from real-time strategy in that it doesn’t require you micromanage resources or some kind of overall economy, unlike Warcraft III, Command & Conquer, and the like. So why bring up Myth so much, you may be wondering? Nordic Warriors is so heavily inspired by Myth that many wondered if it was Myth 4, delivered after a long absence. So is Nordic Warriors worth the journey to Valhalla, or should this game be banished to the frosted depths of Niflheim? Let’s find out. 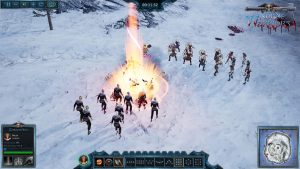 The story of Nordic Warriors is delivered in a pretty budget manner as the game mostly details Freja’s tale with text overlaid on the left page of an old book, with imagery on the right page. The story doesn’t seem to be as much of a focus of the game, as it’s largely just a brief bit of exposition before each selected mission you play. Nordic Warriors progresses in a strict level structure- you select the mission you’d like to do from the list, receive a bit of voiced dialogue about the tale unfolding, then you take control of your soldiers for that level and fight your way to the objective, to prevent your foes from reaching a specific location, and objectives of similar nature. 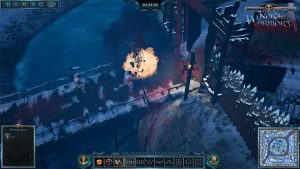 Unlike RTS games, there’s very little (if any) micromanagement of resources in Nordic Warriors. If you start a level with Freja, 4 archers, and 8 warriors, those are your units for the stage unless you stumble across some reinforcements as you progress. This makes losing a unit hurt quite badly, as every unit you lose makes it more difficult to rout the enemy or reach the destination goal. Non-leader units can ‘rank up’ by getting kills, as well. If there was something in the game that explains what ranks actually do, it was either missed or tucked away somewhere unintuitive. Of note, your units also retain their overall kill totals from one map to another, and you can re-name your units as well, which means “Funks McCheese”, survivor of 10 battles, will live on in infamy. 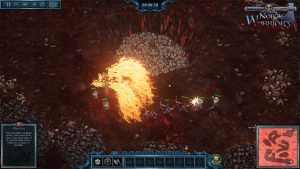 Units can easily be assigned groups you can quickly select, and you can force units to stop moving, hold their ground, attack at will, etc.. Being able to properly control your band of fighters across the land is of utmost importance, as it can be pretty sad to be in a good position, but then suddenly get flustered because the game was set to 4x speed, so you try to press the slow down key but only wind up hitting the speed up key, and while pressing F2 to select your archers, you accidentally hit F3 and select your alchemist and cause him to blow up your warriors. This isn’t typed from experience at all, and playing tactics games is just like riding a bike, except the bike is made of thorns and is on fire (at least until reassigning the keys). Handily, you can re-try maps at any time and can quickly learn that 4x speed doesn’t need to be on all the time.

For the most part, in Nordic Warriors, you’ll be leading your units across a land, discovering enemy placements as you proceed. Not every single combat encounter needs to be fought- there are oftentimes multiple paths leading to various choke points, and you can “sneak” around foes if you can stay out of their range. Sometimes zombies will appear and will just wander around slightly, so you can take another path or a wide berth around them to avoid triggering a combat encounter. Also you can’t just have your alchemist or shaman chuck explosives everywhere, because friendly fire is totally a thing and can take a hearty amount of life off your own units if you’re not careful.- 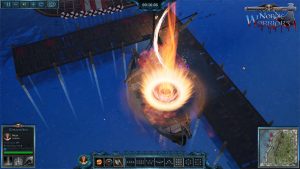 If you do draw the attention of enemy zombies or other simple melee units, learning how to effectively lead enemies around, an action referred to as kiting, will be paramount to your success. Sure, you can send your melee units to go bash up a group of 10 zombies, but you’re only given 8 of those and there is good chance you might lose a warrior or two without even making your way through 1/10th of the enemies on the map. Leading those enemies into the range of your archers to soften them up so your warriors can kill them with ease is definitely the better play (and so long as you don’t get too close to your archers, you can run around rocks and trees to let your archers reduce enemy health with ease). 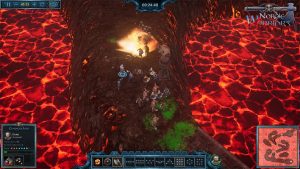 Ranged units make things a little more complicated, but for the most part Nordic Warriors is about properly leading foes in when they’re discovered and using terrain to your advantage. Thankfully, Nordic Warriors does change up objectives every so often so you’re not just doing the same thing on every map, like throwing a stage at you where you need to defend specific locations, which will force you to adopt different plans based on what enemies are approaching and when, rather than kiting enemies around for 15+ minutes to kill them. 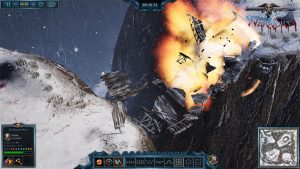 Both the best and worst thing about Nordic Warriors is that this game tries very, very hard to replicate the old feel and nostalgic love for the Myth games. As someone who missed out on those games when younger and played later real time tactics games that improved upon the formula, such as Shogun: Total War, it can actually feel quite stifling to go back to a game so directly inspired by RTT games from the 1990s. Nordic Warriors is basically like playing a Myth mod pack in modern graphics- for better or worse, with few refinements. 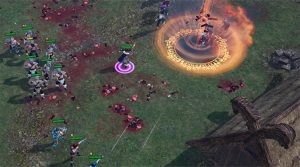 All in all, the game plays quite well and brings an old formula back to the forefront to hook itself right into the veins of those who have been wishing for Myth 4 since the start of the 21st century. While it can appear a bit basic at first for those who grew up with later, more complex RTT games, by the third map Nordic Warriors should have shown you that this is not a game design formula with which to be trifled, and even after that there are around 11 more levels to play. For those who have been pining for old school RTT action, Nordic Warriors can slake your thirst like none other. For those who may enjoy more recent titles like Shadow Tactics: Blades of the Shogun or Total War, it could prove more difficult to get into Nordic Warriors, though there is a well-designed game in its nostalgic simplicity. For those who like it, simple is good.