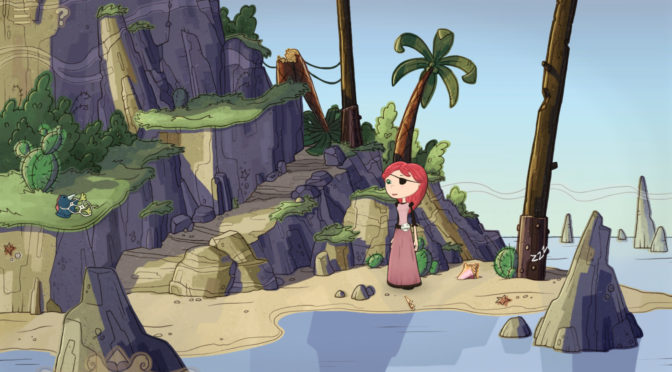 It’s a rare thing, but occasionally an adventure game comes along with the exact right mix of immersive environment, brilliant writing, and well-constructed puzzles. Nelly Cootalot: The Fowl Fleet is one such game. With it’s on-target voice casting and easy-to-use interface, it’s sure to be a hit for any adventure enthusiast.

The story of Nelly Cootalot actually begins almost a decade ago. Here, I’ll let this passing pirate tell the tale:

Avast, ye! Set ye down and I will tell ye a tale of long ago. It be 2007, a time when the words “subprime mortgage” did not automatically send shivers into yer very soul. It was a time when open source developer sites swam the seas for as far as yer good eye could see. It was a glorious age ta be sure.

One such site was called Adventure Game Studio, a haven where ye could go to make yer own point-and-click adventure game for free for nigh upon 20 years now. Though scores upon scores of lesser games were made, a few gems stood out. One such game was called “Nelly Cootalot: Spoonbeak Ahoy!” and was made by Alasdair Beckett-King, a real joker (seriously, he is a comedian by trade, as well as a maker of film), as a gift for his girl, whom the main character was modeled after, at least according to yon Wikipedia.

Thank you, random pirate. Anyway, this first game won several awards, and was praised quite highly by pretty much everyone. In the summer of 2013 Alasdair (who coincidentally looks a lot like Alan Tudyk’s character Steve the Pirate from “Dodgeball”) circled around from being great at his other various pursuits and started a Kickstarter campaign for a sequel game, asking the internet for £15,000 and getting a little more than 20,000. Then after two and a half years and a sizeable increase in budget and scale, we are finally treated to the next adventure of Nelly Cootalot!

The story opens on Nelly at her current seafaring job – clerk on a postal barge. As she begins her chores, her ghostly mentor Captain Bloodbeard appears and telled her that that her old nemesis, Baron Widebeard, is up to no good once again and must be stopped from harming more birds. Armed with only her wits, her companion bird, and everything else that isn’t nailed down (because, you know, adventure game), she must find a way to defeat Widebeard and save the birds.

To do this Nelly goes to (among other places) various islands, a tea shop, a volcano, and inside the mind of a Mexican voodoo monkey (no, seriously). She meets many of the characters from the original game, including the aforementioned monkey.

The gameplay is fairly straightforward. When your mouse cursor passes over something that can be interacted with, a name pops up at the bottom. Left-clicking will have Nelly interact with it (picking it up, activating or speaking to it, depending upon what ‘it’ is), and right-clicking will have her look at it and tell you more about it. If you are having trouble finding interactions, a press of the space bar will reveal them. You are actually led through a short tutorial for these controls at the start, which is definitely a step up from the original!

The artwork is really well-done. The backgrounds are all chock-full of stuff here and there, inviting you to examine whole sections even if there is nothing to click on there. Every scene is a treat to view. Even though it is essentially a 2D game, the graphics are all actually 3D-modelled to give it you an more immersive experience.

While the music is truly top-notch, the thing that makes the the game for me is the voice acting. They managed to get some real pros who put their all into each role, but of course my absolute favorite was hearing Tom Baker in the role of Sebastian the Coot, Nelly’s friend and advisor. I loved watching Tom as the Fourth Doctor in the BBC series “Doctor Who” on PBS (the only way we Americans could get it at the time) in the mid-to-late-70’s, and I can safely say he’s been my favorite Doctor in the entire series, old and new. One of the things that makes each Doctor distinct is how he wields his voice, and Tom Baker managed to be both likeable and commanding at the same time. It was a real treat to hear what he brought to this role.

The voice acting in this game is so good that I fired up “Spoonbeaks Ahoy!” and played it, just to imagine the “Fowl Fleet” actors saying the lines. The first game was made for free with pretty much Alasdair by himself, so it had just text on the screen and no voices. But now it does – in my head!

Generally what makes a point-and-click adventure stand out is its humor, and Nelly Cootalot: The Fowl Fleet has this in all the right proportions. Sure there are some whoppers of puns floating around (like the junk store and the junk food restaurant residing on Chinese boats – get it?), but generally the funny resides in the incredibly smart dialogue. I found myself making unexpected outbursts many times while listening to the characters interacting with Nelly.

The puzzles themselves are amusing and clever, but easy enough to solve with a little effort. They usually involve combining one or more item in your inventory, and then interacting the item with a person or object in the scene. While they often have humorous outcomes, the puzzles themselves need merely everyday logic and decidedly un-punnish combinations to overcome. And of course, the Achilles heel of many a point-and-click – simply not being able to find the one tiny thing your need in the busy scene – is cured with an application of the space bar.

The game environment is somewhat free-form. You are moved forward in the story in linear ‘chapters,’ but within each part you are free to wander around, and have some liberty with the order in which you solve things. For example, to leave an island, Nelly might need both a working ship and an exit permit (among other things), and each of those goals have several steps. Generally you have the freedom to work on one exclusively until solved, or do a little of each at a time – it’s up to you.

If you get stuck, or can’t remember your laundry list of objectives, you can always consult with your pal Sebastian, who will cover what you’ve solved and what needs doing. Though it isn’t too hard to keep things straight on your own, you still may need advice on how to proceed sometimes. I will admit to feigning ignorance form time to time just so I could hear Tom Baker deliver more of Sebastian’s lines. Seriously, I could listen to him all day.

Nelly Cootalot: The Fowl Fleet is easily the best point-and-click adventure to come out in years. It hits the mark in every department, with great art, excellent voice-acting, engaging music, and top-notch puzzles. It definitely earns top marks from us – 5 GiN Gems!

Though the end sequence of this one didn’t hint at a sequel nearly as strongly as “Spoonbeaks Ahoy!” did, I sincerely hope we haven’t seen the last of Nelly Cootalot!