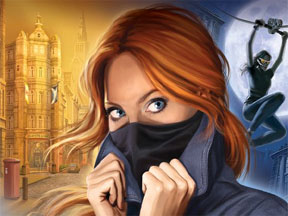 Like mother, like daughter. It turns out Nancy Drew’s mother was as much a sleuth as Nancy herself, until her deerstalker was forcibly hung up by the car accident that took her life. Instead of being the journalist Nancy always believed, it turns out Kate Drew had a secret life. When a mysterious package arrives claiming to have information about her mother’s untimely end, Nancy naturally (being Nancy Drew) can’t resist dropping everything and heading off to Bonnie Scotland to investigate.

Scotland, as we know, is full of people falling over themselves to be helpful, which is why Nancy’s luggage is stolen the minute she sets foot in Glasgow. Not to worry, though, a thoughtful chap by the name of Alec rushes to her aid and promises to track down the thief and return Nancy’s luggage to her. For the moment, though, he explains he’s a kind of skip tracer who spends his time watching people come and go at the station.

He’s not the only person unusually keen to be helpful and friendly to Nancy. No sooner has she checked in at the hotel and read the case file her contact has left for her, she meets Bridget, a crazy red-headed Scots girl who loves Americans and wants to be best friends. Then there’s Moira, Kate Drew’s old work colleague, who, after first sending you on a mission to prove your worthiness (grabbing some snacks for her), has information about what Kate was working on shortly before she was killed. Finally, in terms of the characters you meet during gameplay, there’s Ewan, your Cathedral (a branch of MI5) contact. In true Nancy Drew mystery style, nobody is quite who or what they seem, but you can only find out their true motives by playing through the game and uncovering their secrets.

You learn that Kate Drew was investigating the activities of a terrorist organization known as Revenant before she died, and managed to thwart their attempt to incapacitate the UK with a biological weapon and, from there, take over the world. Now Revenant are back and up to their dastardly old tricks, and it’s down to Nancy to find out exactly what they’re planning.

In this outing, the sleuthing runs tandem to an unusual element in the Nancy Drew Mystery cortege: personal story. In The Silent Spy we get a rare insight into Nancy’s past, namely the loss of her mother and the huge hole it left in her life. We learn something of the difficult relationship between Kate and Carson, Nancy’s father, who rightly feared for his wife’s life while she was out there stirring up trouble for the bad guys. Some fleeting flashbacks – the only cut-scenes in this game – see 8-year-old Nancy witness her mother’s struggle between duty and family and her father’s desperation to keep his wife safe. Little wonder Carson seems to overreact when he learns that, not only is Nancy off on another mystery adventure, but she’s investigating the circumstances surrounding her mother’s death.

In my view, the personal story seemed to outweigh the Revenant thread. Because of this, Revenant as a force of darkness comes across as insubstantial – more like another puzzle to be solved rather than a real menace. Far from being the deadly terrorist organization they were when Nancy’s mother was around, they appear to be hell-bent on making crank phone calls and idle threats. Aside from references to it from current characters, and in Kate’s old correspondence and notes, the main evidence that they exist comes through the creepy-sounding calls Nancy receives. These ask her to make choices between finding out about her mother and sabotaging Cathedral. Their threat to Nancy never rises above the ‘do as we say or we won’t tell you about your mom’. It comes over as weak and insipid, despite everyone else’s insistence that the danger they pose is real.

This is Nancy Drew, so of course there are clues in abundance everywhere you look, as well as puzzles and a bunch of initially unrelated items which will probably come in useful later if you put them in your inventory. There are books and scraps of paper which are full to bursting with background story and clues. Often those clues exist to solve the puzzles sprinkled liberally throughout the game.

Some puzzles are fairly straight-forward, others take a bit of head-scratching and regular reference to the clues in your inventory. The ones which genuinely bring a sweat on are the timed ones, which are often frustratingly time-consuming (for some reason). An example is trying to unlock someone’s phone by replicating a complex square of tartan. This is done by laying different strips of color down on the screen in the right order. This unrealistic bit of hacking is timed, and if you fail, you’re rewarded with a ‘fatal error’ screen. You get retries, but each retry gives you less time on the next go.

You need money for souvenirs and train tickets, and you’ll find it lying around if you take the time to look in every nook and cranny. If you can’t be bothered to hunt around for the money you need, you can earn it working as a cookie maker. This mini game takes place at a snack stall outside the hotel and involves Nancy making up a cookie to match the picture on the right using cutters, jams, sprinkles and icing in a particular order. The quicker you do it, the more you earn in tips. It’s one of those in-game activities which can keep you amused for hours, or bore you to tears, but if you need that cash… Personally, I didn’t mind it, but then, I can play Candy Crush for hours. Just saying.

The game’s graphics are nicely-rendered, but pretty pedestrian in comparison to other modern games. High-octane action isn’t what this game’s about, though, so the whimsical envisioning of a Nancy Drew Scotland gives a player time and headspace to think. The music is also nicely measured, with some local flavor adding to the atmosphere. Sound and voicing were okay to um, with the Scottish accent being gratuitously abused throughout. Perhaps this was deliberate, as I’m pretty sure only 1 percent of the world’s population are able to understand an authentic Glaswegian accent without an interpreter.

In terms of the typical Nancy Drew, this game takes its story to another level. This wasn’t a solve-it and save an innocent person from going to jail game, this was a preventing wide-scale disaster and saving the world game. A change of pace (if it can be called that) in a very real sense. Nancy got to play with cool spy kit. She got to wear special glasses, ride zip-lines, plant bugs and stuff. There are secret rooms with cool gadgets in them. There’s danger, there are complex moral decisions, there are painful choices. Considering the stakes involved, the final solution, the bringing down of the bad guy, was all bloodless, gun-less and violence-free. A refreshing outcome when so many of today’s games take the ‘easy’ path of handing the hero a weapon and letting all hell break loose.

The magic, as always with a game like this, is in the story. It’s rich and intriguing. It asks difficult questions and tackles painful issues. The story will keep you trying to solve a puzzle time and again, when the clues still don’t make sense or you’re just not quick enough to complete it in time, or you really don’t want to shoot another arrow at that damned window. Bagging the baddie is incidental to the real story, which is Nancy learning the truth about her mother, and getting to know her, even though Kate Drew’s spy days are over and, sadly, she will now stay forever silent.