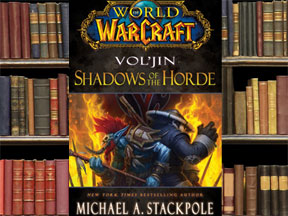 World of Warcraft: Vol'jin:
Shadows of the Horde

Michael A. Stackpole’s book, Shadows of the Horde is a welcome addition to the World of Warcraft universe and demonstrates why he is already an award-winning novelist. It provides in-depth character studies alongside plenty of action, set in the far land of Pandaria.

The three main characters are Vol’jin, an outcast troll, Chen, a legendary Pandaren brew master, and Tyrathan, a deadly human archer. The encompassing theme of the story is balance; the delicate balance of Pandaria, the balance of Alliance and Horde, the balance of war verses peace, and the inner balance of self that each character strives to achieve. Each character journeys through self doubt and identity crisis as they struggle to learn where their lives should lead them, and where to finally call home. The central theme highlights the places and opportunities where enemies can see through each other’s eyes and learn to form friendships as they fight battles within themselves trying to discover who they really are.

On their journey they endure some bloody battle scenes and amazing feats of combat as they unite to fight a common enemy, and save Pandaria from invasion.

The book centers on Vol’jin, the troll leader of the Darkspear tribe who is betrayed by Garrosh when he sends an assassin to slit his throat and eliminate him as the Darkspear leader. Afterwards he struggles to heal both physically and spiritually from the shocking betrayal.

Vol’jin finds himself alongside an injured human hunter at the Shado-Pan Monastery where they both must learn to live together and tend to each other while healing on the sacred ground of Pandaria.

There they both encounter Chen, who has his own journey in Shadows of the Horde. Chen’s journey of balance is between humor and seriousness, and his keen wanderlust juxtaposed against his desire to settle down and become a family man. There is a romance woven into the story between Chen and Yalia Sagewhisper that, aside from charming readers, provides some tender moments to offset all the bloodshed and violent battle scenes.

This is, at times, a very dark story and scenes of death during battle are told in unwavering, gory detail. A core aspect of the trolls is their violent nature. This violent aspect of the trolls isn’t merely hinted at. In fact it is magnified. To offset this, the story takes time to celebrate life and kinship, depicting scenes filled with tantalizing meals and drink that you can almost taste and the sound of the characters laughter as they tell tales of their own after a victorious battle.

Shadows of the Horde was one of the best Warcraft novels I’ve read to date. It doesn’t matter whether you are Alliance or Horde, because it highlights neither. It’s about finding balance within and finding one’s true self. It’s in the shadowy gray areas where enemies can become united and learn to admire each other, even forging friendships. It’s the place where any lost soul can rediscover the path that leads him back to who he is deep within his heart and see that we are all alike, whether you are a troll, a pandaren or human.