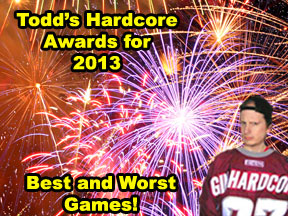 Two weeks ago, I gave my special awards of certain games, developers, and individuals worthy of mention, be it good or bad. This week, it’s time for me to acknowledge the best and worst games that I played this season. With the launch of the Xbox One and PlayStation 4, I thought the lineup of the current generation would diminish, but thankfully I was wrong, and I still was able to come up with 5 of the best and 5 of the worst, so without further ado here are the best of the year:

Please note these top 5s are for games that I actually played before writing this.

I never saw this one coming. When Killer Instinct was announced as a launch title for the Xbox One, it made me consider an Xbox One, despite all the DRM controversy that was talked about at the time. Then I heard all the other issues with the game that gave me second thoughts: the free to play model where you get one character for free and you purchase the rest separately, and that the game was being developed by the same folks who made bombs such as GI Joe: The Rise of Cobra. Over time I watched more and more of the game, and with every new build, it made me want to play it more. At the end of the year I finally got my hands on KI, and it ended up being the most fun brawler I played in recent years. Double Helix took this game seriously, and continued the trend I am loving of remakes being done right. Granted the lineup is small right now with 6 characters available for Season 1, two more are on the way (Spinal this month and Fulgore in March,) followed by a possible Season 2. And yes, the soundtrack, which actually changes as you fight, is as epic as ever. Orchid’s theme alone is worth the full game, as her theme is one extended trash talk session. And yes’the return of ULLLTRRRAAAA, as you can see here.

Far Cry 3 was beaten only by XCOM: Enemy Unknown last year as my choice for Game of the Year. When I heard that an 80s theme XBLA spin off called Blood Dragon would be released, I knew I had to play it. Wow, was I pleased with the final results. From the cheesy VCR style loading screen to the opening helicopter assault a la Predator, the Aliens-esque Blood Dragon nests (ironic since Michael ‘Hicks’ Biehn played the lead character,) leading up to this year’s Holy **** Moment of the Year, the Battle Armored Dragon Assault Strike System unveiling, the final product won me over. Please Ubisoft, make a full retail sequel for Xbox One!

Another one I didn’t see coming. The Tomb Raider series was long in the tooth, and a makeover was desperately needed, and Crystal Dynamics nailed it perfectly. This reboot is a harsh retelling of Lara’s origins of how she evolves into the Tomb Raiding legend that we all know her as. But as I said, this game is very brutal, as Lara literally takes a pounding and still keeps going. But when she is killed, it is some of the most gruesome ways possible. Not for the faint of heart, but those who can stomach it will be pleased. Even better, an Ultimate Edition is coming out for Xbox One and PS4, so I will be looking into those as well.

Notice I didn’t mention the PC or Mac versions here? There is a reason why; the PC version was in my list of the 5 WORST games last year. With all the always on DRM, Error 37, and the auction house problems the game had, the PC and Mac versions seriously disappointed me. The 360 and PS3 versions, however, do not have any of those problems, and with the revamped control scheme best suited for consoles, the finished product was an absolute joy to play. THIS is how Diablo III should have been done in the first place.

You saw this one coming, didn’t you? Grand Theft Auto V might be one of the most misogynistic, offensive, violent games out there, but it is still quite enjoyable. There is tons to do, featuring a storyline centering on three characters, including Badass of the Year winner Trevor. And for those who finish the main campaign, there is Grand Theft Auto Online to keep you busy…as long as the microtransactions don’t ruin it.

Ok, now that we’ve seen my picks for the best, now let me show you my worst. Let the hate mail commence.

I really wanted to give Battlefield 4 a try. I really did. The problem was with all the bugs and issues the game had, it just wouldn’t click for me. When you consider that DICE is actually holding off any future DLC to get the game fixed, you know you’re in trouble. I will mention that I played this on the 360, and hope to try the Xbox One version soon, but I have seen reports of the PC version suffering from serious crashes all the time too. Maybe if DICE can get this all fixed out, it might get better, but at the end of 2013, it was a huge disappointment!

What happened here? Arkham Asylum and City were both awesome, but Origins did everything wrong. Bad glitches, butchering the voice acting (why no Kevin Conroy as Batman? And some irritating boss fights (Deathstroke in particular) turned me away way too soon. I had no interest in finishing this game. Oh and I won’t forget to mention WB’s blatant lies in their television ads by making it look like a PS3 exclusive. Inexcusable!

Oh 2K, how you messed this one up! NBA 2K13 was excellent. Finally they got the shooting mechanics right after all these years, and the game looked and played great. This year? You can’t make any shots again, there are way too many steals, you can’t play proper defense (though the CPU is near perfect) and frustrating glitches kill what used to be a proud franchise. Please note that I am not including the Xbox One and PS4 versions in this countdown, though 2K is making everyone think it is a PS4 exclusive. ‘We do not favor one platform over the other’ they told me when I filed a complaint about this false advertising. Suuuuuuure! Then why act like the Xbox One version doesn’t exist?

Go ahead, call me out on this one. Tell me about how beautiful this game is, and how Elizabeth is a great supporting character. I won’t deny those. But the fact is, even with that, the game is grossly overrated. In fact, it is not a Shock game as far as I’m concerned. Where are the RPG elements? Where are the hacking puzzles? Where is the deep character development? This game ends up just being another cookie cutter shooter that I lost interest in right away. It was not fun at all, and I just can’t get it. Please 2K, give us System Shock 3 and make it as great as Shock 2 was, then I’ll be happy!

Double Dragon Neon was awesome. It was fun, it was enjoyable, it was a great parody of 80s and 90s arcade games, and it had an amazing soundtrack. It was also a top 5 pick for me last year. This year, Double Dragon II came out, and it was an ugly, glitchy, poorly controlled mess. I don’t know how it was in development for years, because it felt rushed into market, and not worth even the demo download, let alone a full purchase. You know how I talk about when remakes are done right, this is definitely NOT one of those, and perhaps the worst beat-em up I played since Warriors Street Brawl!

Needless to say these games were harsh for me to play. I’m hoping 2014 will be better for me, but we’ll have to see how the Xbox One and PS4 games pan out (as well as if the Wii U is able to survive.) It will be quite an interesting year.

But for my next column, it will be my annual Super Bowl prediction video. Watch for it!

Waiting For: Titanfall (Xbox One)