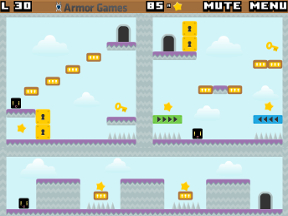 This week I journeyed through the internet once again to find a suitable game to show off. This time around I didn’t have to search far. The first game I ran across was called Parallel Levels, and its unique concept immediately caught my interest.

Parallel Levels is a platformer/puzzle game that requires players to get the character to the end of a level to progress. What separates Parallel Levels from other games of this type is how gameplay is handled. Instead of controlling one character at a time, players have to control multiple characters to help them all reach the end of their levels without dying. The player controls all of the characters at the same time and must be careful to plan out their moves before going forward.

This unique style kept the game really interesting. Even when I knew what to do, the challenge of pulling it all off while controlling two or three characters made it interesting. My only real gripe with Parallel Levels’ gameplay was how floaty the controls are. The game requires a lot of precision to complete levels, but the controls make this hard to do.

Graphics in Parallel Levels are fairly simple. Each of the levels and items have moderate to low detail. Characters are the liveliest things in the game. Each character is represented by a block. These blocks have several different facial expressions that change every time the player dies. Some of the faces on the block were fairly amusing.

Audio in Parallel Levels is enjoyable. The game has a really upbeat soundtrack that I enjoyed listening to for the entirety of my play. I think part of my like for the song comes from a string of notes that come together and sound almost identical to a track from Chrono Trigger (my favorite game, which deserves more love than what Square Enix gives it). I actually still have the game running in the background as I write this review just for the music. Sound effects in the game had a similar upbeat feel and reminded me of something I would hear in a Mario game.

Overall, I enjoyed my time with Parallel Levels. The game has a variety of unique levels that take a lot of thought and skill to complete. My only real complaint with its gameplay is how floaty the characters are. I enjoyed the designs of Parallel Levels (even if they were really simple) and some for the faces made by the cubes were entertaining. The audio in the game was also very enjoyable and brought up familiar feelings from other games.