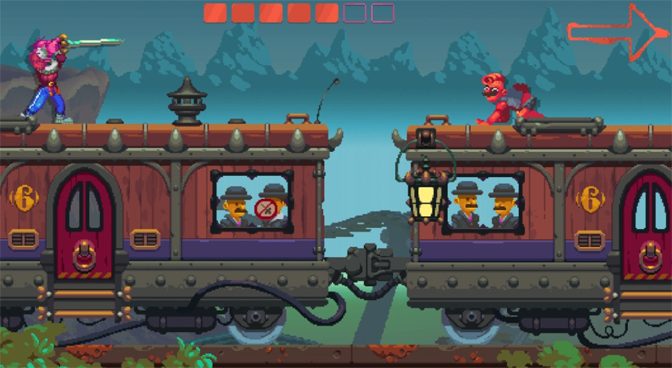 Hey all I’m back with a game made for local multiplayer, a true rarity these days. It’s Nidhogg II!

If you and your opponent have your weapon at the same height you parry each other, if you don’t it scores a quick hit and the hit person dies. The good news is that you respawn very quickly, and it’s not over until one of you reaches the other’s side of the field.

Thankfully that isn’t a huge problem as there will more than likely be multiple weapons lying around that you can pick up quickly from both you and your opponent gutting each other repeatedly.

Unfortunately, that’s pretty much the entirety of Nidhogg II. It’s really made for multiplayer and if you just play against the CPU it gets boring very quickly. That being said if you do have local multiplayer, it’s a blast.

Definitely invite some friends over to play this one. And if you are lucky enough to have a group that gets together to play often, Nidhogg II is a game you will want to put into rotation. 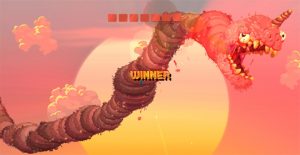 Art: The art is okay, and while it has its own very unique style and “charm,” it’s not amazing artwork like you’d see in a Final Fantasy game or even a Tales of game.

Music: This also isn’t spectacular, but then the point of the game is be played with multiple people at one time, so you are unlikely to notice the music if you actually do that.

For those who like: Fighting Games, Easy Game Mechanics, Multiplayer, Oddball Art Styles.

Not for those who don’t like: Any of the above, or a game that can get boring very quickly.