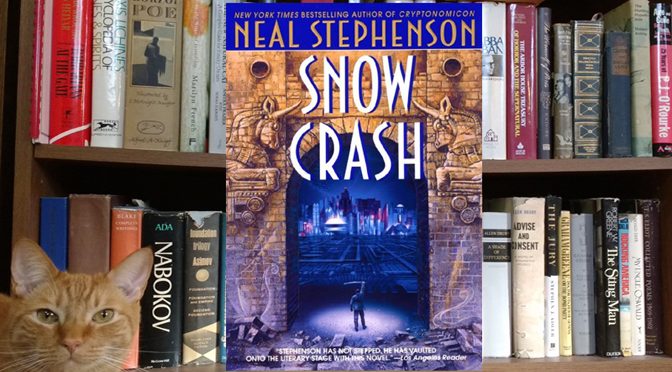 Editor’s Note: Bill Jackson of the Tech Writers Bureau and Cybereye fame will be reviewing a series of classic books for GiN over the next few weeks. These are great stories that you might have missed, or might just miss, and which some of our favorite videogame tropes are likely based. First up: the cyberpunk classic: Snow Crash.

Neal Stephenson, a prolific and far-ranging thinker, has produced quite a few good books. Cryptonomicon probably is my favorite, but Snow Crash, published seven years earlier (1992), runs a close second. It is set in the not-too-distant future—circa now—in a franchised world where corporations have taken over the role of government, the Mafia controls the pizza business and entrepreneurship is the order of the day. It’s the gig economy gone wild.

The book originally was conceived as a graphic novel, and it reads like it: Very visual with lots of action and humor. The hero and protagonist is Hiro Protagonist, an African-Japanese-American living in Los Angeles, whose business card reads “Last of the freelance hackers; Greatest sword fighter in the world; Stringer, Central Intelligence Corporation, specializing in software-related intel.” He also delivers pizza for the mob. And the mob takes pizza delivery seriously.

In his quest to find out why a fellow hacker’s mind crashed after being exposed to a viral code called Snow Crash, Hiro falls in with a 15-year-old skateboard courier with all the attitude in the world who goes by Y.T. (It stands for Yours Truly, but she’s not going to tell you if you can’t figure it out.) The quest uncovers a plot by a wealthy televangelist (is there any other kind?) to take over the world using Sumerian malware. While saving the world they are caught between a giant Aleut named Raven who has a nuclear bomb and Mafia Don Uncle Enzo, who isn’t exactly the lovable figure depicted in the Cosa Nostra Pizza ads.

In Snow Crash Stephenson pulls off an impressive feat, creating a future that does not ring false. He depicts a vibrant but somewhat anarchic world recovering from hyperinflation in which the U.S. government has ceded authority to corporate Franchise-Organized Quasi-National Entities such as Mr. Lee’s Greater Hong Kong and New South Africa, and national security is outsourced to commercial armies and navies. That world’s technology rings true today. 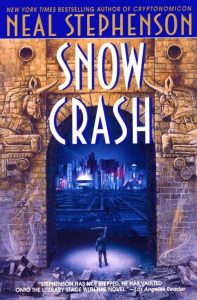 The technology described by Isaac Asimov, writing 60 years ago about a world thousands of years in the future, today is outdated. But writing 26 years ago about what is essentially today, Stephenson describes a world that seems real. True, he didn’t fully anticipate the development of mobile computing. People carry personal phones but they also use calculators and laptops. There still are phone booths and wireless connectivity relies on clunky cellular connections. But the Metaverse, his virtual reality version of the World Wide Web, is everything we want the Internet to be—and what it might soon become.

[amazon text=Did you miss Snow Crash when it came out, or want to read it again? You can get a paperback copy, or your preferred futuristic format, from Amazon!&asin=0553380958]

There is other neat technology that also seems tantalizingly close to realization, such as Smartwheels, adaptable wheels that carry skateboards smoothly over uneven surfaces, allowing Y.T. to go up and down steps and travel safely while tethered to cars and trucks. Snow Crash is not a completely accurate prediction of today’s world, but it is a perilously close description of what today’s world could be. In one prophetic passage Y.T. exclaims to her mother, “It’s like, if you—people of a certain age—would make some effort to just stay in touch with sort of basic, modern-day events, then your kids wouldn’t have to take these drastic measures.”

Stephenson has been criticized for likening the human brain to digital computers and equating language with programming code, important plot points in Snow Crash. These critics are probably correct, but so what? It’s science fiction. I’m impressed that linguists, computer scientists and philosophers take Stephenson seriously enough to critique his work. Like many other serious science fiction writers, Stephenson is having an influence on science, especially in the areas of gaming, virtual reality and immersive communication.

Stephenson has written a lot of good science fiction, historical fiction and speculative fiction, and if you enjoy stories with a lot of action and humor and enough factual background to get you thinking, look for it at your local library or bookstore.