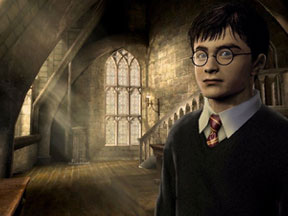 Harry Potter and the
Order of the Phoenix

I’ll admit it: Whenever I see a movie title that’s been adapted into a game, it usually produces a sigh of contempt. My bad road with this type of game started with Ghostbusters on the NES and continued with the ever-present thorn in my side Fight Club (I mean, Fred Durst? Really? Really?). Needless to say, I have my own dispositions, and now EA’s new Harry Potter and the Order of the Phoenix was going up against these prejudices.

The game opens and the first strike makes itself known. As far as story goes, the game’s plot is a butchered job of the movie/book. The right highlights are presented to keep things moving, but for the most part, it seems a pair of scissors got a hold of the script and tore it to pieces.

Other problems: Reoccurring headaches are brought forth while listening to Ron and Hermione nag you to do mission objectives (they are always with you), and there are a few small rooms where the camera angles prove more frustrating than helpful.

However, aside from the fact that the characters use the adjective "Brilliant" way too much, the gameplay itself is where the bad comments end and where the good stuff starts rolling in. The objectives of the game are very, very simplistic. While some people may think this a down side, keep in mind that this is a game designed for children. Mundane tasks are definitely on the menu. Throw in a few schoolyard brawls, and you have something that fills the requirements of a game like Harry Potter, but then the developers go and add some other things to sweeten the deal.

First off, we have the controls. I have a pretty good idea how it works on the other consoles, but straight up, this game was made for the Wii. I mean, you use your remote as a magician’s wand! How cool is that? And it’s amazingly responsive. I’ve been known to criticize multi-platform releases on the Wii, but the guys designing the controls for Harry Potter nailed it. I couldn’t be happier.

Other high points come from the various mini games played throughout the castle, like Wizard’s Chess, Gobstones, and Exploding Snaps. These are as entertaining as the side challenges found in games like GTA: San Andreas, and they do their part to add another layer to the world.

As for the world at large, Harry Potter & the Order of the Phoenix is basically a sandbox game where you get to explore Hogwarts Castle and the surrounding grounds. There are a number of different rooms to search, and even more Easter eggs to find. As you play through the task of finding the members of Dumbledore’s Army, you gain magic points and discover secrets that unlock prizes and behind-the-scenes content that you can view in the Room of Rewards.

The Marauder’s Map helps you find your way during all this, though it is not very detailed, but once you choose a location you want to reach on the map, shadowed footsteps help lead you there in the game.

The fights in the game are somewhat boring, and, since there’s no penalty of death in the game, even if you lose the story still continues. But since the skirmishes are not greatly emphasized-they seem more like another mini game to be honest-the problem doesn’t cause too much concern.

Later on in the game, you get the chance to play briefly as Sirius Black, Dumbledore, and the Weasley Twins, but they are by no means unlockable characters, and their inclusion serves merely as a marketing point; just another feature to declare on the back of the box. This, however, is forgivable as well.

As a kid’s game, Harry Potter will keep the younger players busy for days running through all the stairs and hallways of the castle while working their way through puzzles and tasks. For older gamers, it will be appreciated for its controls, graphics, and abundance of things to do and explore.

Overall, I’m happy with the way Potter stood up to my usual doom and gloom attitude toward movie-to-game titles. I give it 4.5 Gems.

Visit the official game site and also subscribe to the Potter newsletter to keep up on all things Potter.