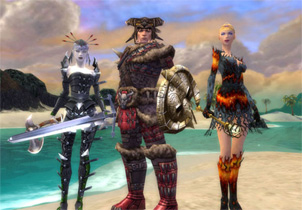 You know the scene; you’re in a fantasy landscape, reminiscent of Austria and you’re slashing your way through a field of swamp trolls. Hack slash, hack slash. Then you look up and ooh, umpteen characters, much like yourself, hacking and slashing their way through a field of swamp trolls. All of a sudden you’re in a Kafkaesque nightmare and you’ve become a mindless cog in an even more mindless machine. Yes, that’s right it’s MMORPG syndrome. But now NCsoft has launched what it says is a MMOG with a difference, Guild Wars.

I know we’ve heard it all before, but this time, it really is different. Before we even get to gameplay, there’s one crucial difference with Guild Wars; no subscription fee! That’s right, simply buy the boxed game and away you go. No money leeches out of your account every month. Of course the game will get updates and add-ons, but it isn’t compulsory to buy them and it won’t affect your ability to play if you decide not to buy.

All of a sudden MMOG gaming isn’t like taking out a gym membership. You can not play for days and not get that feeling of guilt about getting your money’s worth.

Now on to the game itself. It’s your standard sort of Tolkein-based type of fantasy fare. Elves, mages, warriors and rangers are the order of the day.

I have to say, compared to something like City of Heroes, the character design just doesn’t pass muster. There aren’t enough costumes, faces, or hairstyles to differentiate your character from other people’s characters. The choices are very limited, so consequently the game is populated by characters that more often than not, are identical looking to your own.

Not only does this detract a little from your ability to really identify with your avatar, but it’s really hard to recognise friends. Once you’ve seen one necromancer warrior, you’ve seen em all.

Your character has a primary and secondary skill set. The primary powers are chosen in the character design screen and determines what you look like. I chose to be an elementalist, wielding earth, air, fire and water powers.

Once you enter the gaming world you start exploring and meet masters of the other powers. You test out some of the powers to see which you prefer, but to progress and go off to war you must choose a secondary power. I went for ranger skills, simply because you get to tame animals and have a pet prowl along beside you. The mix of powers you choose does add some degree of customisation, but I’d still like more physical attributes and costumes to choose from.

Guild Wars comes into its own when it comes to quests. Once a quest is selected and you head out of the towns, which act as central hubs, the mission world is generated just for you and your party. The beauty of this is, the experience feels entirely yours. There are no parties of similar characters hunting the same boss as you and tracing your every move. And more importantly, there no morons stealing your kills! It’s just you and your friends in your own instanced zone.

In fact, the highest level is just 20, putting the onus on you to play the game, enjoy the story arcs and explore the Guild Wars universe. As you complete missions you uncover more of the world map and experience new and exciting landscapes. Travelling is also made easy as you simply click on a location to be instantly transported there. So there is no trudging over hill and dale to make it back to town.

Quests become relaxing, quiet times to just kill stuff and chill with your party. For those who prefer the drudgery and daily grind of the more traditional MMORPG, Guild Wars may not be enough of a chore. The emphasis isn’t on levelling and devoting large chunks of your life to the game.

Soloing is made easier than ever. Simply recruit a few NPC henchmen and you can quest to your heart’s content. Add a healer and a warrior to your party and off you go. There’s a corner of Guild Wars to suit your every mood. Head to towns to chat, dance and play air flute – it has to be seen to be believed. But if none of your friends are on or you’re not in a socialising mood, the henchmen are comfortingly silent, although not the sharpest tools in the box.

Items are collected along the way and some can be broken down into craft materials. Head back to town and hand over your squares of linen to a tailor who will fix you up a new outfit to strut around town in. Weapons can also be upgraded and modified using gathered materials.

Guild Wars is effectively one big world servers. There are different servers, but you can skip between them willy nilly. The beauty of it is you can speak to anyone on any server. And if you want to meet up, simply select the district from a drop down menu for instant in-game transportations.

It’s all lovely in a United Colors of Benetton type of way, but can make socialising tricky. Broken English makes it harder to sort the wheat from the chaff and the misinterpreted from the socially challenged. All in all though, the people I’ve met on Guild Wars have been great. After all, it’s the community that makes or breaks a MMOG and with Guild Wars the world is literally your oyster, earning it a full four GIN gems.