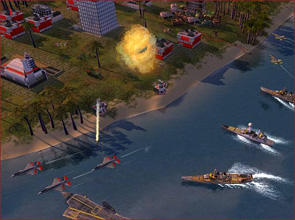 My book summarizing the depth of EE2 will be released in about a hundred years, but for now, I’ll try to throw it all into a few pages.

To say that EE2 is in depth could possibly be the largest understatement ever. This is the single most in depth RTS game that this gamer has ever played. In fact, I can honestly say that I was overwhelmed at times. This isn’t to say that the game is not playable, quite the contrary, I’m just stating that it takes much focus and multitasking. Being overwhelmed with options is certainly not a bad thing. It’s like being placed into a candy store at the age of five – just downright awe inspiring.

The user interface is actually very well set up but will take some getting used to simply because of the options that lie within the game. When you combine your citizens, military, economic, and diplomatic tasks and try to manage them all at the same time, you’ll probably want to know the proper hotkey or menu option.

Once you have taken your time using the tutorials, you can decide on a variety of options ranging from a campaign to a scenario or even a map editor. Opportunities abound and there are basically endless options to tailor your game. Of course, the D-Day simulation is one of my personal favorites. All in all, you can start out with nothing and build your empire or dive into an already created chaotic battle and try to survive.

As you progress through the epochs of EE2, the many different military units you can access will blow you away. There are upwards of 300 units, which help provide endless combinations of weaponry and war tactics. Not every civilization has the same kind of units as there are some specific to each civilization and they excel in different aspects. However, each civilization can do its own damage in its own way so none of them are truly better than any other.

When expanding your empire, the progression through the epochs is what really comes into play. Mr. Obvious would like to point out that if you are still throwing spears while your opponent is blasting you with guns, you’re in for a short-lived game. As you buff up your tech trees, you also have the chance of gaining different "crowns." If you exhibit the best military advancement over a period of time, you get the "Military Crown," best economy gets you the "Economic Crown" and there is also the "Imperial Crown."

Each of these supplies you with a bonus during the amount of time you hold the crown. For example, you can choose to have your infantry get more health while you hold the military crown. This proves helpful if you are planning an attack or really trying hard to advance your economy.

A few nice additions to your military interface are the picture-in-picture feature as well as the war planner screen. There is a smaller screen in the lower right hand corner where you can zoom in on a far away battle to keep tabs on your troops as you manage another part of your empire. This is definitely a great tool to utilize during a major campaign. Campaigns as a whole can be managed by using the war planner. Here, you can bring up a map of the territories and draw your plans of attack. This is particularly useful when you are in partnership with another player and attacking multiple areas.

Along with the military portion of the game comes managing your citizens who are the cornerstones of building your empire. There is a citizen manager that helps you in this task as they gather wood, stone, etc but really the tool can only do so much when you end up having hundreds of citizens. As you expand, managing citizens can sometimes falls to the way side while you try to keep your armies together on the battlefield. If you aren’t a fan of macros or hotkeys, then the management can make things very stressful.

One soothing aspect of the game is the music. If this wasn’t a calm soundtrack, I think some players might lose their minds! They definitely provide music to soothe the savage beast. The only sound related issue is the voices every time you select a unit as they recite the same word or line over and over.

The graphics are pretty standard and can look rough if you are a fan of zooming in close. Had the graphics been a bit smoother, this game would look and feel phenomenal. Alas, the graphics are par for the course and even mildly flawed at times.

Thus far, I have only scratched at the surface of this game. The options and opportunities for gameplay are endless. If you get bored with this game, you have problems. EE2 is not for the faint of heart and probably not for the RTS beginner. For those of you hardcore RTS players, this game is for you. You will be thoroughly entertained with the plethora of options and upgrades throughout the game.

Once you get a solid grasp on the game you will find yourself immersed in your empire and struggling to keep up with everything that is going on. The developers have created as many shortcuts and hotkeys as they could and they definitely prove helpful in your quest for success. If you are up for a major challenge (even on the lower difficulty levels) give EE2 a shot.