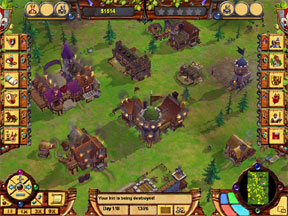 Medieval Conquest is an interesting take on the real-time strategy genre. It combines strategy, kingdom management and a big heaping dose of humor.

Those of you who played the excellent RTS game called Majesty will have a good idea of the gameplay featured here. You don’t really have total control over your heroes. Though you can assign them to patrol areas, if they are tired they will leave to sleep at an inn or grab a bite to eat. If you don’t keep them happy and well-supplied, they might leave your kingdom all together.

Your job as leader of your fiefdom is to both expand your lands while completing orders given to you by your king, and keeping your adventurers happy.

You make money in the game each time your adventurers kill a monster, and there are plenty of them in the fairytale like countryside. You will likely start out hunting ladybugs (well, they look like ladybugs but are carnivorous and quite aggressive) and gradually move on to spider gobblers (which are a combination giant turkey and deadly spider) and eventually to huge boss-level creatures that will take several brave adventures to tackle.

You get a little bit of money when a weak creature falls and a lot of money when a powerful one dies. The catch? As your adventures get more powerful, they become more demanding. And you have to spend that money on equipment that they can use to become even more effective in combat. You have to ride the curve where you are not overspending your budget and forgetting something, but keeping good armor on your heroes backs and sharp weapons in their hands so they don’t tackle something they can’t handle. Finding and riding inside this balance is the key to victory.

You need to build quite a support infrastructure as you go. You will need inns for adventures to sleep in, churches for healing, shops to provide weapons and armor, entertainment and protection.

As an example, when just starting out one of your warriors might use his bare hands or a pointy stick. But once he makes second level, he is going to ask for some leather armor and perhaps a dagger. That means you need to build a blackSmith and a weaponSmith and also buy, or stock, the item requested. Once that is done, the adventurer will buy the new gear automatically once they have accumulated enough cash, as your heroes apparently get a share of the killing money as well.

There are three types of adventurers and each one requires their own support shops. Mages won’t buy ranger armor and fighters can’t purchase spells. So it’s a bit of a balancing act to spend your meager budget correctly, not just getting the buildings but stocking the right items.

As your heroes get more powerful, they also get even more finicky. A simple roach-infested food stand is no longer going to be good enough. You are going to need to invest in a fancy steak house. And your little community theater is for the lesser folks. Powerful adventures want a full scale carnival to entertain them, or some real companionship at your four star brothel.

The interesting thing is that this gives you the option to produce multiple groups of heroes. Your powerful ones can move on and find adventure and more powerful things to kill, and take advantage of the advance buildings you construct away from your main town. Meanwhile, you can form a "B-team" of new heroes that are perfectly content fighting insects, bringing in money, and using all the lower-end facilities your other adventures leave behind.

The entire game is very fun to play and the emphasis is placed on humor. All the monsters are not only funny-looking, but also have funny descriptions in the game’s monster manual. They will kill you just the same, but you might die laughing first.

You can zoom in all the way to ground level to take a look around your town and each of the adventurers is highly detailed with big eyes and comically large heads. Or you can zoom out to get a strategic view, which is where you will spend most of your time.

The one problem that I found with the game is that it can get away from you. Some of the maps are really huge, and it’s difficult to get enough cash to construct an entirely new town so far away form your starting one. You can do this on a smaller scale, but you won’t be able to build multiple blackSmith shops and other adventurer stores. So your adventures will spend a lot of time running back to town to buy new weapons. You can speed them along by putting in horse stables, which increases their speed on roads, but still, at one point I had two large groups of eight people committed to fighting their way into a monster lair, and all but two people were in transit going back or coming from the store. So my two guys were overwhelmed quickly and had to leave to get healing in a hurry.

In all, Medieval Conquest is cute and fun to play. It’s nice to see a game that does not give you total control over your units but lets you coax them to battle. And the addition of humor and a storybook-like world should help the game appeal to all ages of players. It earns 4.5 GiN Gems for their treasure chest. And it only costs $20, so it won’t drain your hard-fought-for treasury either.