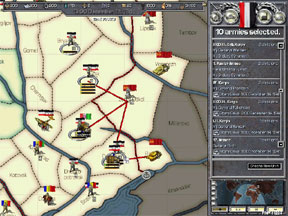 When Hearts of Iron came out in 2003, it really redefined the strategy genre. Being able to play any country in the world from the all-powerful United States to the power-hungry Germany to tiny little Luxemburg was pretty interesting. If you played a small country there was not a lot to do before someone’s war machine came in and took you over, though this was realistic.

And when I say you run your country, I mean you run every aspect of it. You have to keep the people on the home front happy, manage your technological infrastructure, support your troops, cater to and make allies and run your grand wartime strategy. It is all very intense and not an easy endeavor. The original reviewer said it was the hardest game to learn he ever played, and I know for a fact that he plays a lot of strategy games. He did say the game was also one of the most rewarding. So it was a get out what you put into it type of situation. Here is a link to the review if you are interested.

But for all its great features, the original Hearts of Iron had a lot of problems. All that complexity led to a few mistakes being made, which lead to the game getting only a 4 out of 5 for gameplay, which when combined with average graphics, brought its overall score down. Some of the gameplay problems included the world market, which never really worked correctly and some problems with air to ship and ship to ship combat, where the ships were fairly invulnerable to actually being sunk. Convoy management was also overly complex. Pile on top of that the fact that the game manual, which should be your savior cutting through all the complexity, was rattled with spelling mistakes and even factual errors where what was described was not how the game actually worked.

Paradox did a good job of fixing these problems with a series of patches. There were at least six of them released I believe. Even with the sixth patch however there were still some gameplay problems, like nations not surrendering even if you controlled all of their home territory. In one game I played I, as the US, had every single space of the Japanese home island, yet because they still had troops in Vietnam and Asia, they refused to surrender. Or I should say, I was not given the option to ask them for surrender, which I think is very silly.

But I don’t want you to think that Hearts of Iron Platinum is just the original game with all the patches. HOIP actually does add quite a bit into the mix. For starters there is a completely new scenario that you can play. These scenarios are great because the game sets up units and world leaders exactly as they were on the eve of the scenario in real life. So if you play one of the countries involved in the operation, you can play the old "what if" game and see if you could have attacked or defended more successfully than the real generals did.

There are also many new events that come up while you are playing now. These mini-events were a real joy in the original game, and are a lot of fun here too. Sometimes the events are just things that happen which you have no control over, like a nuclear scientist spilling his coffee and when observing the pattern of droplets on the ground realizes some principal of nuclear fusion, which gives you a free advance. Others, like a rebellion in an allied country, or a strike in your steel-producing factories, gives you options as to how you want to fix the problem or which side to back. These events can change the nature of the game in both subtle and dramatic ways.

The game manual has also been redone. The new manual is factually accurate and actually describes the gameplay. Trust me, I know you don’t like to read the instruction booklet, but this 88-page manual is pretty much required reading if you want to be successful. It’s nice to see the book no longer steers you wrong.

The diplomatic system is also vastly improved. You have more options and your diplomatic wing can be a lot more effective when used correctly. Before diplomacy was never really much of an option, but now it is at least a vital component to your overall strategy.

The artificial intelligence of the computer-controlled armies and nations is also a lot smarter now. The game seems to be more adept at researching specific technologies to meet its strategic goals. Also, units attack in smarter ways, especially at sea. This of course makes the game even more difficult to conquer, but nobody said fighting a war on a global scale would be easy.

And of course all the features of the original game are included like over two hours of classical music, thousands of real historical figures that have been painstakingly researched including generals with different strengths and also political leaders that can move your country in different directions.

On a final note, the game system is incredibly popular. Its tough when you find a good game and then you go online and nobody else is playing. But that won’t be a problem here. Paradox says it has 30,000 active members playing its games. I don’t know how many people are there, but I do know that every time I went looking for a multiplayer game I found more than enough people to jump in and fight. This happened at all hours of the day and night, a testimony to the global nature of the players dispersed around the globe.

So Hearts of Iron Platinum keeps all the positive traits of the original game, and goes a long way to eliminating the negatives. It raises its gameplay score from 4 GiN Gems to 5, which also puts its overall score up. I have seen the game selling for around $20. And at that price it would make a more than worthy edition to any strategy gamers arsenal.