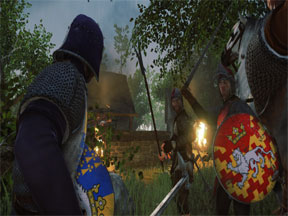 War of the Roses

I think most gamers are like me in that we like all things medieval. Even the good old Dungeon and Dragons we grew up playing was basically a medieval world, although one filled with monsters and dragons, and quite a few fair maidens who needed saving. But we are probably in love with the idyllic version of the medieval world, the Renaissance Festival version where everyone gets a turkey leg, a cold ale and a seat with the king at the joust.

In real the real world, medieval times were brutal and life was hard. Never was that more true than the battlefield, where men literally hacked each other to death for a few coins a month and some runny gruel. It’s this brutality that is perfectly captured in developer Fatshark’s War of the Roses.

The game is, at its core, an online battle simulation. In fact, it’s not much more than that, so those looking to go questing or to become a hero to the people, should probably search elsewhere. This game is about mud and blood and fighting on the frontlines for king and country, or at least trying to survive long enough to get your next meal. Set in fifteenth century England, the game follows the tribulations of the Royal House of Plantagenet, with its two major factions, the house of Lancaster, represented by red roses, and the house of York, represented by white roses. They are fighting for the throne, but it’s you and the rest of the troops who have to get them there.

You fight with up to 64 other players in a series of medieval battles. These can either be objective based, as in, capture the flag or simple death matches where the first team to kill enough of the enemy wins the day. You can either play as the Whites or the Reds, or switch sides each battle if you want. Nothing is persistent from battle to battle other than the personal glory and gold you have earned for your character, which can be used to build out your own version of a perfect medieval warrior with a variety of weapons and perks.

When you start out, you will be forced to play a lowly footman, which is basically a lightly armed soldier with a sword and shield. As you earn experience, I would recommend you play Conquest maps and rush forward to get free XP from the first and second flags on each map, then you will eventually unlock an archer. An archer is great if you like ranged weapons, but he is so lightly armored that the knights will come after you for easy kills if they can get close. Next is the crossbowman, who packs quite a punch, can one shot kill even guys in heavy armor, but has a painfully slow reload time. The last of the normal characters is the foot knight, which is a knight without a horse. He has heavy armor and a big halberd, but is a bit on the slow side.

By then you will have made level ten and can spend your gold, which has not been doing anything for you thus far, to unlock your first custom class warrior. This can be anything you want. You can make an archer and then unlock perks so that you can draw and fire your bow more quickly, or get a horse and ride around trying to trample people. You will find that you don’t have nearly enough gold to get everything you want in the way of perks and gear, so your only choice is to go back to the battlefield to earn more of it. Also, there is no way to undo or sell back a perk, so if you accidentally buy something you don’t like, too bad, live and learn I guess. You can always skip that bad apple when you unlock your next custom character. All told, you can have four custom loaded out characters.

The game is realistic in quite a few ways, which is heaven for those with a historical bent. Not only can you choose from over 30 different types of weapons from billhooks to two-handed swords, hunting and war bows to eight-foot-lances, but also the material and style of each weapon. Picking a heavier type of steel might do more damage at the expense of swing speed for one example, but there are many combinations to experiment with, and each weapon has its own quirks that you will need to master.

One thing you will learn very quickly is that War of the Roses is not like any other shooter, even ones with melee attacks. You have to use your weapons correctly or they won’t hit anything. Some massive weapons like giant axes only do damage if you hit with the tip of them, so you will always miss if you are right up against your opponents. This opens up some anti-armor strategies where lightly armed peasants with daggers can rush right up and cut a knight to death if their opponent can’t back up and get clear. This hyper-realism in terms of weapons can be extremely frustrating to new players, but hang in there until you master it. There are different types of swings you can use to help you get around or through enemy armor. I found that a strong spear and a poking attack works pretty well, but you will learn your own strategy. There are four tutorial maps that you can play and practice on alone. Although the AI is pretty brain-dead, they make good targets to practice your shooting or your swings.

Once you get into real combat, you may find that you will start bleeding once hit. If you bleed too much, a countdown timer will tick overhead, and if you don’t bandage yourself in time by holding down the B key for a few seconds, you will die. Of course if you are going toe to toe with an enemy at the time, they probably won’t give you the time. Chivalry died at Agincourt after all, in the birth of the gunpowder age. Thankfully, no guns made it into the game however. You would have to be a prince to afford one at this point in history, and it was just as likely to blow up in your face as kill a rival.

If, or I should say when, you are knocked down, you will likely be lying on the battlefield unable to do anything. If you are lucky, a teammate can come by and revive you. If you are unlucky, an enemy will roll you over, hop on top of you, and proceed to stab you about the face and neck with their dagger until you’re dead. This is a really terrible way to go, but at least you get to see the face of the man you are going to want to enact revenge on up close and personal when you respawn. You get money and XP for killing people in that way. I can tell you that some of my greatest joys in the game was finding that one bastard who killed me and brutally returning the favor. If nobody finishes you off and nobody fixes you up, after a while you can ‘beg for mercy’ which also lets you respawn. Oh, and sometimes you will be killed outright, like when you take a crossbow bolt to the head.

There are a few little problems with the game. Compared to most first person interface type games, shooters especially, War of the Roses can look and play a little clunky. It looks fine overall, but more in the way a simulation title can mimic reality without really tricking the player into thinking they are actually in the world like some games do. It’s a fine line distinction, but one you will see when playing.

The characters also move a little stiffly. Its difficult to jump over low obstacles that you should in all rights be able to hop right over. There are not very many hiding spots or ‘Easter eggs’ or even fortifications that grant an innate advantage on the map for holding. Putting a bunch of archers on top a castle wall for example, is pretty pointless because there are at least two stairs and a ladder going right up to you. It’s all just terrain to fight over, and thus there is not a lot of opportunity for any real strategy beyond just ‘get them.’ I didn’t see a lot of difference in the seven maps currently available.

That is not to say I didn’t have a lot of fun playing. But fun in War of the Roses is what you make of it. I know lots of friends who are perfectly happy running around stabbing everyone they can. They equip huge armor and two handed swords and just wade through the ranks. I know other people who enjoy riding horses and trying to trample the peasants. For me, I like being an archer, especially one who goes after enemy archers.

My first custom character I named a Stalker. I gave him medium armor, perks so he could run and draw his bow quickly, and I equipped special arrows that cause bleeding damage. In combat I avoid the middle ground where the knights play, and instead tried to sneak into the backfield where the enemy archers tend to gather. That’s where I get a lot of my kills. I remember one instance where I was spotted by another custom archer, probably also a bit of a Stalker build. We were all alone behind the battle, dodging in and out of buildings, trying to get a kill shot on each other. We even hit each other a couple times, but only glancing blows. A quick duck away for a bandage and the fight was back on. This went on for almost ten minutes. I really learned to respect that guy. I made a vow that if I knocked him down, I would not kill him, but would instead let him beg for mercy and respawn in peace. I hoped he would do the same for me, but who knows what he was thinking.

Our battle sadly ended pretty abruptly. I had ducked away to stop the bleeding from one of his better shots, and when I looked back around the barn, my opponent was dead on the ground. One of my heavy knight-type Lancaster teammates was stabbing him in the throat with a short sword while a guy on horseback looked on. I suppose they had come to my aid, but I really didn’t need saving. I never saw that York archer again, but I hope he lived a long life in his respawn, and perhaps even got revenge on the knights who interrupted our battle.

That’s kind of the story of War of the Roses. There are these long periods of almost mindless combat, that while fun in the moment, are forgettable overall. Then there are these magical moments when stuff happens that is just incredible. Things like my archer duel, or the time I stalked down a jerk who teased me before finally giving the death blow so I could return the favor, or the time I cut a horse out from under a knight, that I’ll remember forever. Those types of things happen when you put sixty four real people together in a warzone where kills are still up close and personal, and stir. It’s a unique recipe, and one that I think most gamers will savor.

War of the Roses earns 4 out of 5 GiN Gems for their treasury. For those looking for something different than shotguns and sniper rifles, this war fits the bill. It may have a pretty name, but combat here is brutal, life is short, and you will love every minute of it.