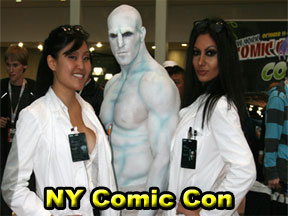 New York Comic Con can be daunting for the uninitiated, but it’s doable with some critical mental preparation. Developing a kind of situational awareness that is only appropriate in a convention context is essential, even for someone who lives in New York. No, you are not insane. Yes that is a half-naked engineer from Prometheus on his break, texting someone on his smart phone. Yes, that is a hipster Daenerys wearing heavy black-framed glasses, a house Targaryen T-shirt, and a long flowing wig of white-blonde hair. Yes, that is a gender swap Thor wearing a fabulous evening gown and cape in the middle of the day.

Even sounds can be disorienting if you’re not expecting them. I heard the Tardis sound coming from somewhere in traffic as I was walking toward the convention center, did a double take and saw a man with Number 10’s haircut driving a blue car heading east on 34th street. This is all completely normal during con.

I took a picture of the Prometheus engineer later in the day, and I’m not sure why he was with the naughty nurses, but what’s a convention without a little cognitive dissonance? That’s 100 percent of the motivation behind watching the Just Dance 4 on Kinect stage at various points of my day as I wandered around the exhibit floor. People in costume get up and go for it with no shame. It hasn’t been a good convention if you don’t get the visual of an unexpected costume mash-up.

I usually wait through two or three songs to see the different groups on view as each song changes. The highlight this year was a dance for couples to "The Time of My Life" from the Dirty Dancing soundtrack. One of the young ladies was dressed as a hamster, which worked. But it was the young man with the gothic Lolita who successfully completed the lift immortalized by Patrick Swayze and Jennifer Grey at the end of the song. Another favorite of the costume mash-ups was a group that included Batman and a zombie in a Captain America T-shirt dancing to Rapper’s Delight. Also spotted: DeadPool and Lady Deadpool dancing to Moves Like Jagger.

Beyond the costume craziness there were the games. Ah yes, the beautiful, beautiful video games. At the Square-Enix booth there were two specific game demos that caught my attention. There were several stations for users to try their skills at the latest version of Tomb Raider. The demo is captioned as the NYCC Hunting Game Demo. I watched players steer Lara through various trials: seeking shelter from a storm, obtaining a bow and tracking and hunting a deer for food. I, like many other gamers, was unhappy with the decision to have what one of the game’s developers referred to as an "attempted rape" scene as part of the plot to elicit empathy for Lara from players. Check out this episode of the GinLounge podcast for views from both male and female gamers on the treatment of female characters in video games.

I also watched a number of people play the demo for the Hitman: Absolution game. The featured mission involved retrieving a kidnapped woman from a house situated near the ocean. Nothing says fun than like stealthily sidling along a window ledge to gain access to a room in a heavily guarded villa. When the environment becomes the puzzle, that’s the sweet candy center of game play for me. The swag being handed out by the booth attendants for playing Hitman was a red tie, 47’s sartorial trademark. I didn’t see any evidence of swag for players of the Tomb Raider Demo, although given the controversy, I would expect pepper spray or brass knuckles.

At the Lego booth, I played part of the siege of Helm’s Deep level of the new Lego Lord of the Rings game due to be released in November.

Unlike the movie, there appears to be more than one opportunity for Gimli-tossing as an offensive tactic. Also of note at the Lego booth were the free-standing Lego Hulk and Darth Maul statues made with Lego bricks as well as the Batman, Wonder Woman and Superman Lego bas-relief panel. At the Snail Games booth for Age of Wushu, I was fixated by the large screen featuring fighting scenes in lush environments set in Ming dynasty China.

NYCC is my local convention, and I inevitably bump into people I know on the exhibit floor. With over a 100,000 attendees you wouldn’t think that happened, but it does every time. It also points to a second facet of situational awareness at a convention: friend or celebrity? It’s an important distinction to make. I spotted and high-fived Grizz from 30Rock as he was walking around the exhibit floor, although from his perspective, it was a low-five because of the incredible height difference.

The last vestiges of the con came as I was walking back to the subway after the exhibit floor closed: a pedi-cab driver dressed as spiderman engaging in Cirque-du-Soleil-esque maneuvers with the passengers in tow as I was passing by the parking lot of the McDonald’s. I didn’t stop for long though, it was time to get back to Brooklyn and back to the other normal.