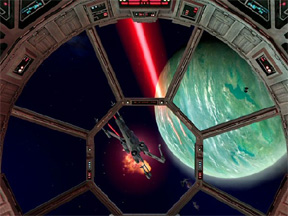 When I started playing Star Wars Galaxies last year, I was pretty enthralled with the game. There I was walking around all the famous planets that I had seen in the movies. But even though it was a pretty fun galaxy to explore, I could not help but think that something was missing.

There I was on Tatooine, wandering around looking at all the desert buildings and getting various missions to conduct, and I came across the star port. Occasionally I would see spaceships flying in and out and suddenly it hit me that I was a ground-bound character in a world of space flight.

Considering the fact that the ships themselves in the movies are just as much the stars as the actors, the omission of any player controlled or owned ships was a bit disheartening. I mean, can you image the movie Star Wars with Han Solo running from a pack of storm troopers and stopping into the local shuttle depot to buy a ticket so he could leave the planet? Heroes don’t take the bus. They have cool rides like the Millennium Falcon or an X-Wing fighter.

That is what the Jump to Lightspeed expansion pack is all about. It adds ships to the online RPG, a few new character classes, and a new form of combat.

Now, criticism aside that this should have probably been included in the original release, the new expansion really does help to increase the fun levels of the game. Besides being fun in its own right, I think it helps to make the overall game more realistic. Now when I want to head to another planet, I hop into my ship, plot a hyperspace route and go.

But space is not the friendliest of places, which is where the new form of combat takes place. Most online RPGs feature scripted combat. In other words, when you attack a monster you basically just stand there and your character will swing and their character will swing and the stronger person normally wins. Games like EverQuest II let you perform special actions like cheap shot blows and the like to increase your chances, but you are still basically letting the computer roll the numbers in the background and waiting for the results. The main combat in Galaxies pretty much uses this method.

Space combat however is different, and totally took me by surprise the first time I experienced it. I saw an enemy ship and got ready to fight, when I realized that my fighter would not do anything unless I told it too. Space combat is more of a flight simulator engine than a traditional RPG interface.

Since you are in space, you can move your ship in any direction. There are space ports, asteroids and in some areas, a lot of space traffic. Your area map shows you where you are in relation to the sector. You can use your hyperdrive to jump from sector to sector if you want, which is how you get from one planet to another.

When you see an enemy, you can fly towards it and start blasting. It will of course try to fight back. Once you are in combat, that encounter is locked, just like in most land-based RPGs. Nobody else can fly in and snag your kill. Their lasers won’t damage the bad guys once you have locked a combat in between you and your opponents.

When an enemy blows up, you get whatever loot they were carrying. This can include credit sticks or ship components not destroyed in the explosion. Crafting your ship with good components is vital and a lot of fun. You have to make choices. Those huge cannons you found will shred an enemy vessel, but may be too big for your chosen reactor, which would limit your shots while it recharges. And your ship only has so much space availabe, so installing all huge components in a small fighter won’t work.

You can pretty easily get a training ship by simply enlisting in the local militia at any major planet, or by joining either the Empire or the Rebellion. The training ship works well, but to put in a hyperdrive and other top of the line components, you will need to purchase your own non-training vessel. A new class in the game is shipbuilding, so wandering around the various player-owned shops for a day or so can probably find you a good deal on a slightly customized vessel to suit your needs. Then you can add new components as you salvage them from battle, or buy them at the market or from other players.

The missions available to pilots are fairly varied, much more so than the ground missions even. You can escort friendly vessels to a jump point, go hunting pirate leaders and even take on missions like hijacking freighters from neighbouring sectors, or rescuing stolen craft.

There are also several long-term multiplayer space adventures available. Mostly you will probably be flying single-person fighters, but you can buy larger craft with multiple stations too. In that case, you can transport friends around the galaxy and they can help out by manning the turrets in battle. If you want, you can create a party boat and journey around the galaxy with friends sightseeing, though combat is more to my taste.

If you tried Galaxies before and left because of the lack of ships, its worth giving the game another try. And if you have not gotten Galaxies yet, now is your chance to buy both the core game and a cool pack that could almost be a standalone title in its own right.