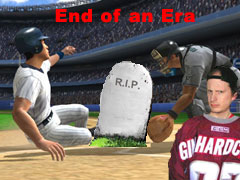 Before I get to my topic for this week, I must ask why it is any time I mention any possible predictions about SIRIUS and XM, it comes true in the immediate future?

Two weeks ago I hinted that maybe SIRIUS should attempt to purchase NASCAR in accordance with my SIRIUS/EA and XM/2K theory. And as fate would have it, I find out that SIRIUS will be the official satellite provider of NASCAR effective 2007. Not only that, but XM caved into pricing and will be raising their monthly charges to $12.95 and making both Opie and Anthony and online listening part of their package. It looks like all the advantages that XM had are fading fast. I don't think that even the MLB will be able to save them in the end (especially when you have the cheaper option of listening online for $15/season.)

But as far as this week is concerned, it will continue on the subject of baseball. As I mentioned previously, 2K Games will be the exclusive third party MLB holder with their MLB 2K series effective next year. As a result, EA Sports' MVP series will end after this year's release. Now based on past 2K MLB titles, I would have been more than happy to hear this news, but after the horrors I had to endure with both baseball titles (at first), I was starting to wonder if the true successor to High Heat would ever come out.

The rough journey towards virtual baseball nirvana began when I picked up MVP Baseball 2005 last week. Initial impressions were quite impressive. I have always loved the game's pitching system, as well as the fielding. In addition, the new Single A minor league teams were a plus (sadly, it's only the High-A teams, so no virtual Hickory Crawdads for me and my girlfriend to simulate). But there was always one major concern for me: the batting.

No matter how much I wanted to enjoy MVP, the overly strict batting system irked me. There was never a game where I could score more than two runs or get more than five hits. Even with adjusting the gameplay sliders for User Batting Contact and User Batting Power, there was no change at all. For a time I thought it was EA's attempt to get as far away from the homer happy Triple Play series as they can, but I thought that MVP's new batting system is going a bit too far.

Frustrated to the point of trading it in for credit on my PSP preorder, I decided to hold onto it while picking up 2K's MLB 2K5. After all, considering the game was only $20, and that it will be the exclusive third party title of Major League Baseball (despite losing the ESPN license), what have I got to lose?

Turns out I lost more than $20. I lost all hope of the series. At first, I didn't realize this was the same development team who made past World Series and ESPN MLB releases (Blue Shift, who moved on to developed the first party Nintendo's Pennant Chase on the Gamecube), but rather Kush Games. The only game I played by Kush was ESPN NHL, which albeit a good title, I thought was too easy because the CPU never scored a goal against me.

I will admit that Kush did an impressive job with the ESPN style presentation as everything is there (the K-Zone, Web Gems, Baseball Tonight trivia, etc), but the gameplay is a mess. The pitching is too easy for me, even with altering the gameplay sliders to make the pitching system move much faster, I was still pitching too well. As for the batting, Kush decided to follow EA with a similar batting system called True Swing. But in the end all True Swing felt like was putting a cursor over where to hit: a batting mode I can do without. They even decided to take out the classic method of batting, which puzzles me because classic pitching was left intact!

But nothing could irk me more about MLB 2K5 than one gaping bug that got through. When I do get a runner on base, and my next batter comes up to bat, the first pitch is ALWAYS a passed ball. In one game I ended up with 12 passed balls, and in an MLB where more than 5 passed balls/wild pitches per game is too much, this is just inexcusable. It got to the point where I had to hold my baserunner on base as I felt like I was cheating.

Now I know that 2K Games released the game to market to counter EA launching MVP a week ahead of the planned March 1st release date, but when you have a gaping flaw like the passed ball bug, there is no excuse. I can only hope that 2K offers a patch for those who bought the Xbox version (PlayStation 2 owners would be out of luck since the game doesn't install on a hard drive) in order to rectify this situation.

After the 2K disaster, I took a few days off away from baseball, worked on my Gran Turismo 4 career, and constantly checked the mail hoping my Tekken 5 review copy would arrive. In the meantime I started looking at the message boards for a site called Operation Sports in order to find help on my MVP batting. While there were some threads that provided some good insights on improving my batting skills, I also stumbled across a thread dedicated to High Heat veterans and how to adjust the gameplay sliders to fit a style that High Heat fans would enjoy.

Seeing as I have nothing to lose, I made the adjustments on MVP, and started a new dynasty mode. From the start, I could notice a difference. The first game of the season was against the Brewers, and in that game, last year's NL rookie of the year Jason Bay hit a grand slam en route to a Pirates 6-3 victory. The following game ended with a 6-5 victory. I was on a roll to getting the right settings, but feared that every game would be high scoring. That wasn't the case as a couple losses to the Padres had me scoring only five runs combined. After simming the rest of the Padres series, I played the Brewers again at their home, Miller Park. The final score in that game was 11-0"with me garnering 16 hits!

Now this is the way I wanted MVP to be like in the first place, having the ability to play a variety of different games: slugfests, pitcher's duels, you name it. Giving MVP a second chance was perhaps the smartest thing I could do, and to see it end after this year will be sad. But hopefully 2K will give Kush Games the boot and they will hire the MVP staff instead.