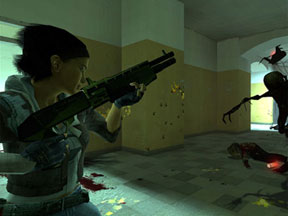 I really wanted the headline of this review to read "Alyx Lives!"

Half-Life 2 was one of my favorite games last year. I know there are those that say that Doom 3 was a better title, but for me, it really was Half-Life. The airboat and dune buggy levels, plus the feel of the world and the enemy AI was something spectacular.

But there was one thing that I did not like about the game, and that was the ending. Possibly the ending for Half-Life 2 was one of the worst ever. Even the so called "bad ending" choices of some RPGs were not this terrible. After fighting your way through countless enemies and finally kicking the alien invaders off of Earth, you are re-imprisoned by that weasel-with-super-powers-pencil-neck-suit-wearing-geek! And worse yet, Alyx is seemingly caught in a horrible explosion with no chance of living? Come on guys. You are supposed to entertain us with a huge finale that makes us happy we played the game, not cut the wind out of our sails at the last possible second.

Obviously, the goal was to make us wait until Half-Life 3 came out to learn what happened to Alyx and the main character, Dr. Freeman.

Either player outrage or a case of good ideas led Valve to change their mind, and in doing so, it really puts the entire business of how games are made and distributed on its ear. Especially if this new strategy is successful, it could change everything.

Instead of having to wait many long years for a sequel, instead sequels are being released in smaller chunks and in a more episodic nature. The first one, called Episode One, takes place right after you shot up the power source for the alien tower in City 17. I don’t want to give anything away, but the fact that a sequel exists shoes that Freeman is alive. And you learn that Alyx is alive as well, right at the beginning. The game does a good job of showing why both Alyx and Freeman are alive, and why Freeman is, well, still free.

Episode One is short and sweet, with about six hours of gameplay as you and Alyx attempt to escape the destruction of City 17. There are no vehicles to drive this time, the streets are too chewed up for a drive anyway, which is a little disappointing, but there are some clever levels using the gravity gun and some other situations like when Alyx is sniping for you and your real goal is to remove obstacles so she can get better shots at the bad guys. The ant lions make a return, but you can plug the holes they come out of using broken down vehicles, which stops them cold.

There is a really innovative level where you are trying to evacuate citizens to a train across a no-man’s-land type of battlefield. Each time you go back to pick up a new group of evacuees, the bad guys get stronger and better. You have to keep the path clear so the citizens can escape, which is no easy task, though if you are smart you can use some of the bad guy’s technology like mines against them. And thankfully, there is one of those forever producing ammunition dumpsters filled with rockets right in the middle of the level that you are constantly crossing.

Alyx’s character is really flushed out this time. She sticks with you most of the game as a kick butt side kick, capable of busting a lot of alien heads on her own. She never seemed in any danger of being killed, but I stuck by her as much as possible. She has unlimited ammo for either a pistol or a shotgun, and can hop on and work turrets as well. Plus, the budding love theme between the two of you also moves along a little, though not as far as most people would probably like.

You can download the new episode off the stream service, or if you are like me and enjoy having a hard copy, you can get it at the store or online at Amazon for $20 or less.

Will gamers go for this new soap opera type of distribution? Considering the low price of each episode and the high quality of the game itself, I think so. It’s much better than waiting for years to get a little trigger time. And, truthfully, Episode One had me the second it showed Alyx was still alive.