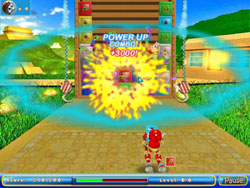 Sometimes the casual gaming market is overlooked in the loud chorus of titles being released in the overall industry. But while most casual games won’t attract the fanfare and the overall dollars that a top tier shooter, RPG or sports title might, the sub-industry as a whole is gaining in popularity with new players flocking to it every day. Some of those players may stick with casual games forever while others will move on to more hardcore fare.

MumboJumbo is an interesting company in this market. They want to create high quality games for the casual gamer, with a level of professionalism that you would normally expect to find in the so called normal market. As such their games are a bit more expensive than you might normally find, but still very reasonable. Xango Tango for example, can be found for just $19.95.

Those of you who have played Tetris or Bejeweled will quickly understand the basic gameplay in Xango Tango. You basically need to line up at least three of the same colored boxes in a row, which will knock them out of a huge matrix, causing other boxes to fall down and possibly triggering other knockouts is more colors line up properly. Unlike most other games I have seen, you are actually able to change the color of a box by hitting it with another one. So if you have a long line of yellow boxes with a green in the middle, you can hit the green one with a yellow one to knock out the entire row. This gives you a lot more control.

But Xango Tango is a bit more than a simple game. It does a lot to really enhance the gameplay experience, starting with giving the game a pretty fun plot.

The game centers around Xango, who is a little toy robot with a big attitude. Most of Xango’s story is told through comic book story panels. The comics are high-quality and drawn quite well.

The plot of the game is that Xango’s owner, a nice young lady, has bought a bunch of little gadgets for him for his birthday. She places them in boxes in their toy factory to give to him the next day. But overnight, Xango decides to help out in the warehouse and sorts and mails all the boxes to toy stores around the somewhat mystical land in which they live.

The girl tells Xango that his gifts were in some of the boxes, and thus begins your quest out there in the world, visiting different toy shops and trying to find the ones with the parts he needs.

The land is divided up into different sectors, each one containing a gadget to enhance Xango. To get the gadget, you need to play the aforementioned box game until every one of the game boards in that section are finished. Then you are given the gadget and can move to the new sector.

The new gadgets often help your performance in future games, though sometimes they simply add a new element to the game and actually increase the difficulty a bit. When you are given a spotlight for example, you have to play the next game at night in the next stage, which means the board is mostly dark except for the part you illuminate with your light.

The game itself is also better than your average one of this type due to fun little graphics, and to some extent, Xango’s personality. You have a time limit in each level, which is represented by a pair of cranes coming slowly down towards you.

If you get a three color match and there is a power-up in one of the boxes, you can do some pretty cool things like blowing up boxes or sending out a freeze ray to hold off the cranes for a while. The graphics are pretty good. If you finish a game with time left, you can roller-skate around catching nuts and racking up points as a bonus.

Control wise, Xango is very easy given that the mouse is very precise compared to some other controllers. You basically just point and click to throw, so it’s pretty easy.

In addition to the story mode, you can also play in relaxed mode, which lets you go back and play any level you have previously conquered, but without the time limit. So you can take your time and really set up some great combos, almost turning Xango into a strategy game and certainly increasing the replay value, something you don’t often find in any $20 title, and certainly not much in the casual arena.

And if you are wondering why the game is called Xango Tango, it’s because the little robot is prone to dancing, which he does at the end of each level. And yes, he seems to have a bunch of different styles from break dancing to some odd form of robot tango, hence the name of the game.

The name of the game in terms of this review is value. For the price, Xango Tango offers a pretty fun experience that is suitable for all ages. It earns 4 GiN Gems, and is itself quite a gem for the casual gamer.