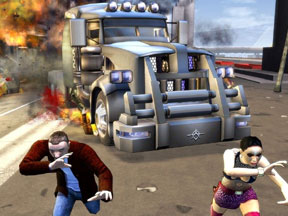 While Xbox 360 owners will have to wait until later in the year before Grand Theft Auto IV arrives, there have been some impressive "open world" action titles available. Last year’s Saints Row turned out to be an above average GTA clone, and now Crackdown offers a surprising twist on the open world experience in more ways than one.

For starters, the main character is not a criminal, gang member or any other villainous type role. Instead, players are put in the role of a member of The Agency, a futuristic police force entrusted to restore peace to the people of Pacific City. However, Agents are not the usual type of police officers (in Crackdown, they are called the Peacekeepers.) Instead, they are genetically altered and are capable of upgrading their abilities in physical strength, driving, explosives, agility, and marksmanship.

The abilities can either be acquired via specific actions, or by picking up any of the over 700 Supply Orbs located all over Pacific City. As a result, your Agent almost reaches superhuman strengths, capable or running faster than a Ferrari and jumping from building to building.

It is almost as if you are playing a scene from The Matrix, almost to the point where unlike other games of the same genre, I found it a lot more fun to travel on foot than by car, and I almost never use cars in the main campaign, as they control horribly compared to GTA.

The skills will become necessary, as the main task in Crackdown is to hunt down and eliminate the three gangs that are a cancer to Pacific. There is the Latino gangbangers "Los Muertos," the Russian mercenary Volks and the Triad-esque Shai-Gen.

Each gang has a kingpin and six underlings that must be eliminated to clear their representing district. Sure it is possible to locate the kingpin and take him out right away, but it’s not recommended. Each underling offers a special ability to the gangs, and by defeating them it breaks that ability, increasing the chances of success against the kingpin.

While the main task of eliminating the gangs is the main goal, the concept of running and gunning does tend to get a little tedious, but thankfully there are many other tasks to take part in, such as collecting all of the weapons and stashing them in your safehouses, known as Supply Points, driving through Stunt Markers, and taking part in Rooftop or Road races.

One of the most interesting things about the game is that its not linear. You can go after whatever gangs you want, or take on some side missions as you choose. The city is your playground so feel free to take any cars or vehicles you want, regardless of who is using them at the time.

Combat too gives a lot of options. You can pick up objects like cars, trashcans or even unlucky people and hurl them at your enemies. A great tactic is to build up barricades to give you an advantage in the combat, or to box the bad guys in so you can take them out. You can also move to the tops of buildings to snipe bad guys or plow into them using vehicles. The choice is yours, which is what makes the game so interesting.

In fact there is a ton to do, and even better, it can also be done via a partner on Xbox Live. Partners can either join in at the same time or take part in a game already in progress. This offers a unique type of gameplay where you and a partner can move around your city blasting the bad guys. Not too shabby an idea.

Of all the GTA style games out, Crackdown has to be one of the smoothest running ones I have ever seen. The action runs very smoothly with nary a sign of slowdown or breakup at all, even when there are a lot of characters and vehicles on screen.

Developer Realtime Worlds even decided to create a comic book style to the artwork by adding cel-shading. It’s a little strange looking but when you consider the setting it makes sense. Some people might not like the art design but I am not one of them.

Sadly the same cannot be said about the sound quality of the game. The acting is very basic, as the only dialogue heard with the exception of pedestrian and gang traffic is that of the Agency narrator. While he speaks in a professional tone, the comments seem to repeat themselves way too much.

During one attack on a gang underling, I was told constantly that "this should be an easy one." Just hearing it over and over again made me want to turn down my sound system. The in-car music isn’t much to brag about either, and I found myself playing MP3s that I have burned onto my hard drive. Don’t expect a lot of cool tunes like you find in the GTA games.

Sure, Crackdown does have its limitations. The constant shooting can get repetitive and the soundtrack is disappointing, but there is still a lot to do and powering up your Agent to Matrix quality levels can be fun, and with another player on Live it can be even more enjoyable.

If a sequel does come out soon, let’s hope that Realtime adds even more to do. As it stands, this is a great first effort by them at a huge non-linear world, and makes a great addition to any 360 gamer’s collection. Perhaps it will even get ported over to the PC, as it would be a ton of fun there as well. Crackdown earns 4 GiN Gems and will be fun for most players for many, many hours of mayhem.