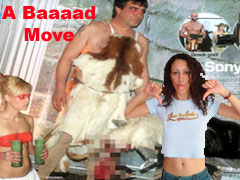 You may not have been aware of the gaming furore that's been brewing this side of the pond. Sony may refer to it in years to come as ‘Goat Gate' or alternatively, forget it ever happened in a nanosecond. Once again those tabloid hacks have found reason to slam the games industry and this time with laughable effect.

The paper in question is the Mail on Sunday, famous for its heroic stand against the scourge that is videogames. Roughly translated this means they have a free rein to blame games and gamers for every riot, murder, bad hair-day, hang nail and stubbed toe in the western world.

But this time they really outdid themselves.

"SLAUGHTER" read the headline. And splashed across the entire front page I might add. You know it's a slow news day when video games reach the front page. Although, that said, Prince Harry is packing his teddy and heading off to war. There's no more royalist paper than the Mail, so this story must have been big to keep our ne'er do well heir to the throne off the top spot. Surely the Mail could have thrown in some "garlic eating, war surrenderer" barbs towards the French in its vain attempt at political insight into the election battle currently raging in France.

Part of Sony's misguided marketing strategy was to feature a dead goat and pretend the guests were gorging themselves on the creature's intestines. The Achilles heel (do you see what I did there?) in Sony's plan was the decision to publicise the event with a double page spread in Official PlayStation Magazine.

Unfortunately, nobody in the Sony team could have predicted the Mail on Sunday staff's inability to interpret irony. It was phrases like this taken from the OPM feature that confused and bewildered the poor Mail journalists:

"How about eating still warm intestines uncoiled from the carcass of a freshly slaughtered goat? At the party to celebrate God of War II's European release, members of the Press were invited to do just that . . ."

"At the event, guests competed to see who could eat the most offal – procured elsewhere and intended to resemble the goat's intestines – from its stomach."

The Mail on Sunday used the evidence to support claims that the games industry's flagrant exploitation of children should be stopped (although, it probably used ‘evil' instead of ‘flagrant'). Sony's PR blunder also fanned the flames regarding violent videogames. Keith Vaz, former MP and known campaigner (for campaigner also see ill-informed source of anti-games vitriol) against violent games put in his two cents worth by calling the event "distasteful and irresponsible," which actually isn't too far from the mark.

Sony's public face has been hanging itself low, bashful and ashamed. The offending article was removed from OPM, although a few unlucky subscribers will be retching over this month's issue.

Publisher of OPM, Future issued said: "We appreciate our readers may have found the coverage of Sony's European God of War II press launch (in Greece) distasteful so we have taken the decision to have the offending images removed from copies destined for the UK news stands with immediate effect."

However, one can't help thinking that behind closed doors Sony is rubbing its hands with glee at the unexpected swathe of free front page publicity.

Sadly, there was no ritualistic slaughter – the goat was acquired from a local butcher and touched by nobody. The intestines which guests were allegedly forced to eat was in fact a traditional Greek soup. Maybe the Mail on Sunday does understand hyperbole after all, but only when it's sensationalising what should have been a very small story. Dead goat at Greek private press event shock – hmm, doesn't quite have the same ring to it.

Despite the lack of any journalistic integrity at the Mail on Sunday, we all have to wonder when Sony thought having a dead goat at a launch party was a good idea. Topless girls and dead animals – oh dear, it seems the games industry is still largely made up of a bunch of little boys who think wit is drawing willies on photographs of authority figures.