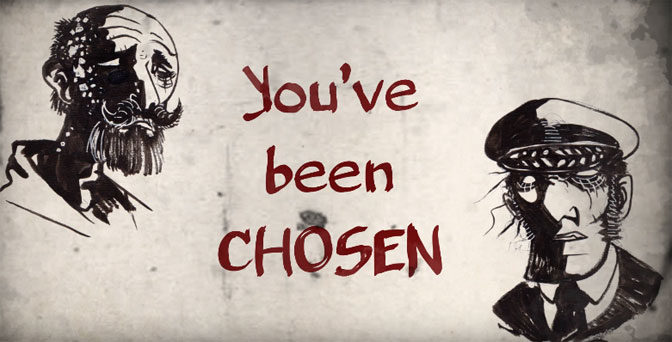 Taking place in 1920 the Story of Kult of Ktulu: Olympic is about Elena, a frail thirteen year old girl, and her mysterious diary. Along with her family she is a passenger traveling from Southampton to New York aboard an Ocean Liner.  Elena is accompanied by her Mother, Sophia, and Uncle Iouri. Her Father, Aleksei, died in the war.  However, through her writings Elena describes a very close relationship.  It is through her father and relationship with Iouri that she spends her days writing.  She also writes in her diary with her father’s quill.  The game is centered around this diary and the mysterious and frightening occurences during her voyage.

Elena and her family are sailing from the Old World, leaving behind her home in Russia for America. On board they meet celebrities and many different and strange characters. Being first class passengers her family mingle with the elite and her mother spends time away from Elena to socialize and improve her standing. Her Uncle is sick and Elena worries about him but he is kind to her and spends his time with the gentlemen on the ship. This leaves Elena alone to write in her diary. She writes about her experiences and thoughts about her family and the happenings aboard the ship.

In essence, this game is a text based narrative game that allows players to choose the next part of the story. It is easy to play but the game is not about the gameplay rather the story and how it plays out.  At first it is just Elena writing in her diary with her quill about memories and current events.  When she writes the player will have a quill cursor and clicking on the pages add the writing. It is typed out as if Elena is really writing and has a quill on paper sound effect. This gives a quality to the game that makes it better then just reading writing on a page. It puts the player in the mind of Elena and as she writes you can sense her feelings toward situations. However, this is a horror game and the mystery begins early on when a self portrait changes to show Elena breaking down.

Afterward the diary is possessed by a spirit or in the game you have a choice of who the mysterious writer is. Using her now magic diary Elena must solve the mystery around a missing boy. Talking to the diary she takes many different paths to understand what is happening on her journey. It directs her to talk to stewards and passengers, or sneak around to find clues.  In doing so she meets many new people and we learn more about the time period and her understanding of the world.  The nightmare on the seas is only beginning and it is up to Elena to understand the Kult of Ktulu.

Even though its not a movement based game the point and click style has a lot going for it. For one you as the player get to be apart of Elena’s nightmare by reading her thoughts and feelings about the situation. Players then direct Elena to explore the mystery on board by having her interact with crew and passengers. She also tells her diary all her adventures and what the passengers she meets are like. Throughout the game more characters are added to the diary files. Maps are added to the maps section and players have the option to start over from any chapter to redo dialogue. The best part of the game is the control players have in the direction of the story and each choice takes the story to a new direction. You can also flip back through past pages to reread the story.

It is not just words but also pictures and sounds. These have important parts in the story. The first picture is when Elena breaks down and then her mysterious diary “friend” appears. This is the player’s character and its their choice that changes the story. Some images come with sounds, such as doors and knocking. These are just added bonuses to make the story more interactive and at times frightening, especially for a thirteen year old girl.

There are moments that add to the horror genre but I felt that it was more of a mystery to solve with clues and investigations. The horror came from the possessed diary and those involved in the ship’s strange happenings.

Kult of Ktulu is a game that has some very good qualities. The idea of our protagonist using a diary to give the story narrative and a mysterious being guiding her. We believe at first that the being is there to help but some choices allude to something much more, maybe even sinister.

Elena seems very trusting in this entity. Having the player be the entity in Elena’s diary was interesting as with the fact we can go back and change the story. I actually liked the quill on paper writing with interactive pictures and sounds to go along with the story. However, what really stood out was the art. The art gave a more horror and mystery look to the game. I particularly love this style of art and reminded me in a way of one of my favorite artists Edward Gorey. In essence this game is very macabre. Maybe even a little Edgar Allen Poe, another favorite of mine. As far as this game goes I very much enjoyed it even it is just a text-based narrative.

Honestly this game was refreshing as it is different from so many other games available. This has to do with the fact we get to use our own imaginations to bring the characters to life. With its interactive narrative and giving the player the part of the mysterious diary entity this game is a great way to spend an afternoon. A macabre tale that takes place in the early 20th century on a trans Atlantic voyage Kult of Ktulu will have players immersed in its narrative to learn the mysteries of the sea.