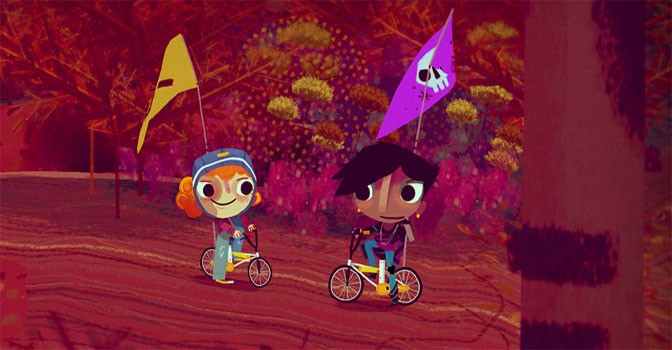 There’s a moment in Knights and Bikes when every element of the game suddenly clicks, and it goes from being a whimsical adventure game to something much deeper. Without spoiling any of the story, there’s a part early on when it becomes clear the game isn’t a childish fantasy come to life, but something far more poignant, exploring themes of what it means to find your place in the world and learn some of life’s most powerful lessons. 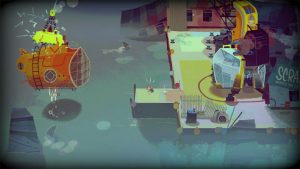 At the same time, players experience those lessons from the perspective of the main characters, Nessa and Demelza, who are exploring the fictitious British locale of Penfurzy Island. There’s not much in the way of explanation as the game thrusts you into the role of the characters and begins unveiling the mystery of the island’s curse and lost treasure.

Taking control of one character while the AI handles the other — or playing co-op — the game tasks players with doing everything from feeding hungry geese to stopping possessed golf balls, all the while hearing the legend of Penfurzy told by Demelza. In telling the story this way, players are left to wonder how much of what’s happening on screen is part of the girls’ imagination and how much is supernatural — or if any of it is even happening at all.

Puzzles, exploration and combat interweave cleverly to keep players engaged and looking for secrets throughout the island’s rich environments. Along the way, each character picks up new abilities that can be used alone or combine for special effects. Nessa, for instance, can throw a Frisbee to take down enemies on her own, but she can also throw it at Demelza, who can then kick it for additional range. 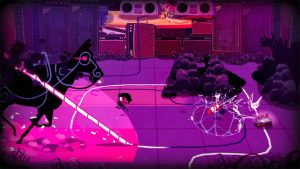 Combat is simple but can become frantic through witty storytelling, such as when the girls’ imaginations suddenly turn a golf course into a battleground or cause buildings at an amusement park to burst into flames. On the other hand, they also face real-life threats like a construction vehicle trying to destroy part of a secret hideout. 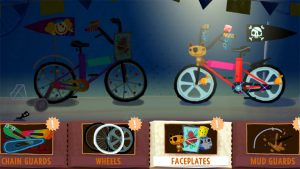 The combat is engaging and helps keep the story immersive, but it’s only one element of a much grander picture. The hand-painted art style is spectacular and lends itself perfectly to the story. Fantasy blends into reality as Nessa and Demelza explore Penfurzy on their bikes, which themselves can be customized in a way that would send an 80s child’s heart aflutter. It’s a neat little touch that’s mostly cosmetic but adds extra charm to the game.

The clever use of color also works to convey the mood, with areas that have been afflicted by the curse taking on a darker, foreboding hue and more reality-based portions evoking a livelier color palette. 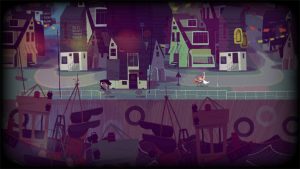 Little touches like that are everywhere in Knights and Bikes, and they aren’t limited to the graphics. From the quirky librarian to the overly dramatic villagers, the developers have somehow created a game that forces you to see the world as a child would. At the same time, players also get a glimpse of the struggles adults face and how they often fail to understand how children perceive what’s happening around them.

The game’s storytelling is sprinkled everywhere you look. While it’s entirely possible to run from one objective to the next and receive the minimum amount of story, stopping to read signs and pick up context clues through exploration fleshes out a rich backstory. 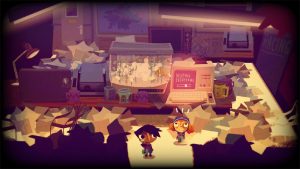 The soundtrack plays an equally important part in bringing Knights and Bikes to life. It captures exactly what the mood calls for at the perfect times while going perfectly silent at others. The opening sequence alone is praiseworthy, but as with so much else in the game, the intelligent use of audio is what shows the skill of the development team. 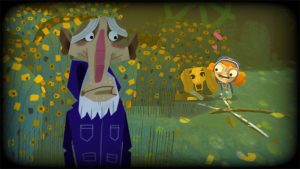 Knights and Bikes is a game that’s nearly impossible to break into pieces. It has to be taken as a whole, and it should be. I’m almost reluctant to call it a game because that term doesn’t seem to do it justice. Knights and Bikes is more of an experience.  It’s quite an adventure game and I don’t think you will find anything quite like it out there. 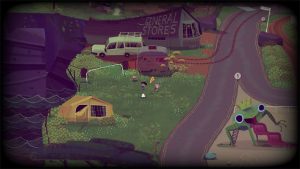 With surprising depth that explores what it means to be a child growing up and finding your place in the world, Knights and Bikes is an absolutely must-play game for anyone who views video games as art.

Knights and Bikes easily earns 4 GiN Gems out of 5. Play this one if you want to recapture some of the magic of your childhood.