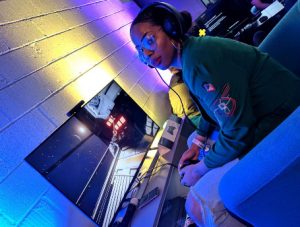 Having run a platform with the word “girl” in its title, naturally over the years many men have come to my platform – which is purposed to empower Black Women in gaming – with their complaints (oh joy). Don’t get me wrong, the majority of my interactions with men on the platform are positive and supportive, but there are other interactions that stir discussions that I’d really love to explore.

A few times, BGG (@blackgirlgamers) has been mentioned in tweets such as “where were you when I was growing up” or “Black Girl Gamers are rare” – by now, I would hope the latter statement to be deemed as wasteful use of words but the first statement made me think. I’ve met and interacted with so many women who game both inside and outside of my own community so when men ask, “Where were the black girl gamers when I was growing up?” I am inclined to think, maybe the problem wasn’t that there weren’t any female gamers around them, maybe the problem is them.

The theme of the condescending male gamer isn’t unique to my experience, it’s found in so many gaming cliques.

It’s going to sound contradictory coming from someone who uses gaming to unite people but having gaming in common doesn’t mean we’ll get along. When I was young, my Mum and I would visit her friend’s house. In the front room, her sons and I would play games whilst the adults chatted. For a long time I didn’t get to play. I would complain to my Mum and her friend who would encourage the boys to share so I got to play a couple times but the more I played with them, the more I didn’t want to. I was constantly being laughed at for making mistakes or made to feel like I wasn’t as good as them at gaming. So after a while, when my Mum asked me why I stopped playing, I told her that I enjoy gaming and they took that away from me so I’d rather not play. The theme of the condescending male gamer isn’t unique to my experience, it’s found in so many gaming cliques.

So when I see that particular question, I really wonder whether many of the men complaining were even worth gaming with. Sure, you and a particular girl/woman both love to game but if you’re going to chastise her every move and make gaming less enjoyable for her, even when she’s better than you – then why the hell should she play with you? Maybe the focus should be less on the number of women around you when you were growing up and more on how welcome you made them feel when gaming with you.

“Hey, I really like this game and I’m a bit of a know-it-all, let me know if it becomes annoying”

I personally don’t like toxicity when gaming and there’s a huge difference between fun, playful trash talk and toxicity. I take my gaming environment very seriously and there will be days that I don’t want to play with certain people. If someone’s playstyle or communication style will frustrate me or make me feel bad – I won’t game with them. And maybe this is concept that’s shocking to some, but women have the right to not want to venture into Tyria, Azeroth or Numbani with you, especially if they feel it will be a negative experience regardless of your intention.

There’s a level of entitlement to women’s time and presence when these tweets arise that makes me question the self-awareness male gamers have regarding their play styles. So many people I know were unaware I was a gamer because I witnessed their playstyle and knew I didn’t like it. Of course someone would rat me out and the person would want us to play together, but that wasn’t enjoyable for me.

So as gamers let’s be a little more aware about how we engage with one another. Understanding your playstyle and how that will affect the other person that you want to game with is important and so is communicating it. It’s really easy to say “Hey, I tend to be a really quiet when I game is that okay?” or “Hey, I really like this game and I’m a bit of a know-it-all, let me know if it becomes annoying”.

Consider that, maybe, your playstyle is not something another person would want to engage with and, to be honest, that’s okay.